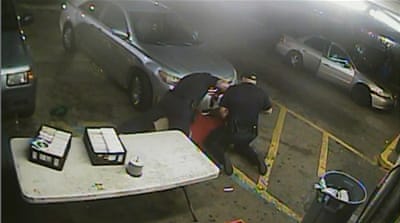 A white police officer who fatally shot a black man in the southern US state of Louisiana has been fired, a police official said.

The disciplinary measure came after Louisiana’s attorney general ruled out criminal charges against the two police officers involved in the 2016 shooting death of Alton Sterling.

Paul told reporters he fired Salamoni for violating department policies on the use of force and “command of temper”. He also suspended officer Howie Lake II, the other officer involved in the deadly encounter, for three days.

Lake helped wrestle Sterling to the ground but did not fire his weapon that night.

Sterling, 37, was fatally shot in Baton Rouge, Louisiana, on July 5, 2016, in a scuffle with police outside a shop where he had been selling CDs. His killing came amid national outrage over deadly violence from law enforcement that disproportionately affected minorities.

The disciplinary measures against Salamoni and Lake were designed “to bring closure to a cloud that has been over our community for far too long,” Paul said.

Police also released body camera footage and other videos of the officers’ confrontation with Sterling.

In the body camera footage, Salamoni can be heard using expletives as he shouts at Sterling to put his hands on a car. At one point, Salamoni points a gun at Sterling’s head and threatens to shoot him in the head as Sterling asks what he did.

When Sterling complains that the officers are hurting him, one of the officers appears to use a Taser on him. Salamoni then runs at Sterling and tackles him to the ground.

Someone yells “He’s got a gun”, then gunshots ring out.

Paul called the footage “graphic and shocking to the conscience”.

“There is disappointment, there is sadness, there is anger,” said lawyer Chris Stewart at a news conference.

“It was clear that Blane Salamoni came out like a pitbull and immediately escalated the situation by putting a gun to this man’s head, using profane language, threatening his life and he ended up taking his life.”

Lousiana Attorney General Jeff Landy this week said the two officers would not face charges as they had reason to believe Sterling was armed, under the influence of illegal drugs and was resisting arrest.

According to the police, a loaded handgun was found in the right front pocket of Sterling’s pants.

Salamoni’s firing comes amid anger over another fatal police shooting of an unarmed black man in the western state of California.

Stephon Clark, a 22-year-old father of two, was killed by police earlier this month outside his grandmother’s backyard in Sacramento.

Police said the officers who shot at Clark 20 time feared he was holding a firearm, but it was revealed later he was only holding a mobile phone.

An independent autopsy report, released on Friday, showed that Clark sustained eight gunshot wounds, mostly in his back.

The killing of Clark has reignited the call to end what activists say is institutionalised racism among US police forces.

According to the Washington Post’s Fatal Force database, more than 980 people were killed by police in 2017. The Guardian identified more than 1,090 police killings the previous year.

Nearly a quarter of those killed in 2016 were African Americans although the group accounts for roughly 12 percent of the total US population.

According to a watchdog group The Sentencing Project, African American men are six times more likely to be arrested than white men.

People of colour make up around 67 percent of the 2.2 million people in US prisons and jails.

These disparities, particularly the killing of African Americans by police, has prompted the rise of the Black Lives Matter movement, a popular civil rights movement aimed at ending police violence and dismantling structural racism.