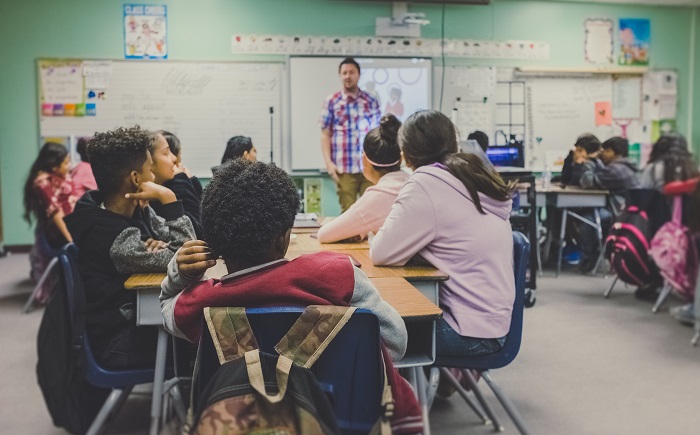 In The Classroom The Perils Of Associating ‘White’ With ‘Privilege’

White privilege – the social advantage that benefits white people over others simply on account of skin color – has become a racial justice catchphrase.

Peggy McIntosh, an academic who originated the term in 1989, described it like this: “An invisible package of unearned assets that I can count on cashing in each day, but about which I was meant to remain oblivious.”

As examples, she highlighted the appearance of being financially reliable, shopping alone without being harassed and seeing representation of her race in history books and the media.

In the wake of George Floyd’s death, an increasing number of white Americans agree that white privilege exists. That includes a growing number of Republicans.

Despite the term’s pervasive use, little attention has focused on how it affects victims of racial injustice, particularly young people of color whose identities are still being shaped.

As a scholar of political psychology, I believe that associating “white” with “privilege” can do more harm than good because it reinforces harmful stereotypes. It can make people of color feel that social privilege belongs only to white people.

If racial minorities believe they are perceived as disadvantaged, the stereotype can diminish their academic performance by activating a psychological phenomenon called stereotype threat – the fear of conforming to a negative stereotype.

That, in turn, induces underperformance on intellectual tasks. And it has also been shown to reduce confidence and heighten anxiety.

Discussions regarding white privilege are not restricted to social media. Increasingly, they are being adopted by university websites and racial justice activists.

This phrase can serve as a constant reminder to students of color that society perceives them as being socially inferior and economically disadvantaged by default.

In other words, those using the phrase “white privilege” to address racial inequities may, paradoxically, reinforce white privilege.

Why does stereotype threat matter?

Social psychology research shows that when minority groups are exposed to unflattering stereotypes that deem them inferior, they will often underachieve academically.

This happens because stigmatized groups subconsciously experience a fear of confirming the negative stereotype – such as “Black students struggle in college” – according to research conducted by academics at Stanford University in the 1990s.

This intimidation implies to the stigmatized person that they might not belong in the field where the tested abilities are important.

In the Stanford study, Black students underperformed compared to white counterparts when told that the test was “diagnostic” – a “genuine test of your verbal abilities and limitations.”

However, when this description was excluded, there was no such detrimental effect on performance.

Even subtle cues can activate this threat to self-image. When students were asked to record their race before the test, Black students performed worse than their white counterparts.

This phenomenon came to be known as stereotype threat.

And it has since been established across several studies to explain the underperformance of stigmatized groups, ranging from non-Asian ethnic minorities to women in quantitative fields in which math skills are important.

With the pervasive use of “white privilege” on social media, race is more strongly associated with privilege and its connotations about socioeconomic class – that people who are privileged must be wealthy. This implies that people of color are typically poor.

That means students of color not only have to deal with stereotype threat associated with race but with class as well. And being perceived as poor and disadvantaged in the classroom can be detrimental to academic achievement.

Scholars at Princeton University and the University of Milano-Bicocca have found that class stereotypes perpetuate academic and societal inequality in several ways.

People attribute well-being, health and intelligence to people with high socioeconomic status, regardless of their own. Wealthy people are stereotyped as more competent than poor people.

Experimental studies further confirm that when children from lower-income families are reminded of their socioeconomic status – by reporting parental income or occupation before taking a test – they underperform on tests.

And that has negative consequences for their self-confidence and anxiety.

Ironically, a term created for racial justice awareness may perpetuate disadvantages already faced by students of color in academic, economic and social settings.

In the exercise, an instructor asks a group of teens to participate in a race for US$100. Before starting, he asks participants to take several steps forward if they meet the criteria of privilege, such as having a father figure at home or access to a private education.

At the end of the exercise, Black students found themselves standing at the back of the queue. The instructor then says that, only because they had that big head start, those standing ahead “would possibly win in the race called life…If it was a fair race, I guarantee you some of these Black dudes would smoke all of you.”

Academics argue that such an exercise can do more harm than good. That’s because it stigmatizes people of color instead of challenging institutions that perpetuate inequality.

Stereotyping in the classroom can be as damaging as stereotyping on the streets. Discussions about race should involve thoughtfulness and genuine regard for the social and economic mobility of disadvantaged minorities.

These discussions could focus on unjust institutions that perpetuate socioeconomic inequality, rather than stigmatizing victims.

The protests following George Floyd’s death have triggered a racial reckoning for many Americans. This is the moment to break away from stereotypes rather than toward them.