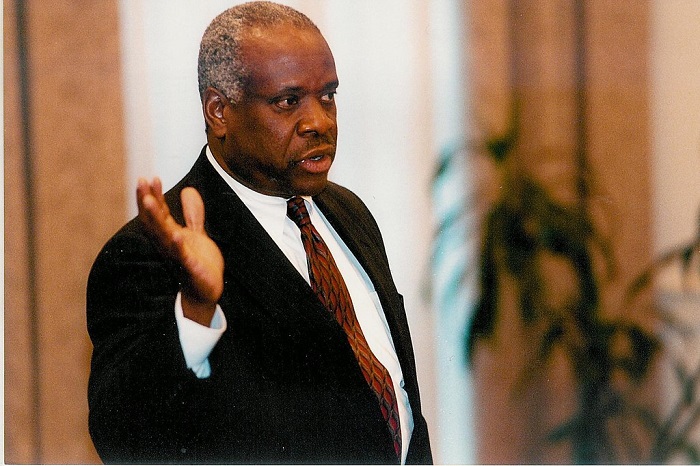 Time and time again, the nation’s highest court has come under fire for failing to manage potentially unethical behavior by its justices.

In the past, the Supreme Court of the United States has cast aside pleas to adopt an ethics code for the justices.

Now, the actions of Justice Clarence Thomas’ wife, Virginia – who pushed the White House to overturn the 2020 presidential election – have once again thrown light onto this long-standing conflict: How accountable should the justices be?

In general, ethical behavior by judges in our federal system is governed by the Code of Conduct for United States Judges, which was adopted in 1973. The code applies to federal judges and magistrate judges serving in the courts of appeals, district courts, bankruptcy judges, the Court of International Trade and the Court of Federal Claims.

Judges must not only avoid actual conflicts of interest, they must also avoid the appearance of impropriety. Thus, judges covered under the code need to recuse themselves from cases whenever their impartiality might reasonably be questioned.

Notably absent from coverage under the code are the justices of the Supreme Court of the United States.

Acting on the assumption that it has the authority to impose rules on the justices, Congress in 1974 specifically included justices in a law requiring the disqualification of judges and magistrate judges when they engage in conduct that mirrors the types of prohibited conduct covered by the code.

Unfortunately, Congress did not include justices in the law that sets up the procedure for enforcing complaints about the judiciary and imposing discipline when a judge acts inappropriately, such as when violating the disqualification law.

Congress sought to bring attention to this gap. In 2015, bills were introduced in both the House of Representatives and the Senate that would have mandated the Supreme Court to establish a code of ethics. The House bill never made it out of committee. The Senate bill met a similar fate.

And even more recently, in 2021, a U.S. House of Representatives resolution called on the justices to subject themselves to the code or to establish their own ethical code. The resolution is a nonbinding and symbolic gesture, and its fate is unresolved, as it remains in committee.

A similar House bill also was introduced in 2021 to require the Judicial Conference of the United States, which oversees the code, to make the code applicable to justices. The House has failed to take further action on the bill.

The debate on this issue is not academic, because the instances in which justices have recused themselves are surprisingly frequent.

For example, one judicial watchdog organization reported that in the U.S. Supreme Court’s October term of 2020 alone, justices recused themselves close to 250 times for reasons including stock ownership in a company involved in the case, previous work on the case or having been personally named in the lawsuit.

Yet despite these documented occurrences, public outcry continues when justices have declined to recuse themselves in cases in which there are strong indications that their impartiality might reasonably be questioned.

The arguments for and against more meaningful ethical rules and oversight of the justices are complex.

One view is that Congress’ imposing an ethical code on justices is not only unnecessary, but might also be unconstitutional. The argument is that because the U.S. Constitution creates the Supreme Court – as opposed to the rest of the federal courts, which are established by Congress – the direct application of a code on the justices would violate the legal doctrine requiring a “separation of powers” among the branches.

Chief Justice John Roberts asserted in 2011 that the adoption of an ethics code was unnecessary. He wrote in his annual report on the federal judiciary that justices not only consult the code “as a key source of guidance,” but also turn to numerous other authorities to govern their conduct, especially in light of unique ethical considerations presented at the Supreme Court.

For example, unlike other courts, there is no substitute justice available to fill in when a justice recuses himself or herself. Therefore, wrote Roberts, each justice cannot recuse “as a matter of convenience or simply to avoid controversy,” because litigants could be needlessly deprived of having a full court hear their case.

Finally, can the justices themselves police a fellow justice’s decision to recuse or not to recuse? That’s unlikely, wrote Roberts, because a court generally “does not sit in judgment of one of its own members’ recusal decision in the course of deciding a case.”

Likewise, because the Supreme Court is the final court in the U.S. system, there is no higher tribunal to review such decisions.

Court reform groups disagree, arguing that individual justices cannot be the sole decision-makers on whether to recuse.

In light of that, one option would to institute an ethics code with enforcement mechanisms similar to what exists under the code for lower-court judges. Greater accountability, such as publishing explanations when a justice decided to recuse or not, would also increase transparency and the public’s confidence in the Supreme Court.

Other reform advocates have gone even further to suggest a host of changes such as term limits, restriction on ownership of individual stocks, more detailed financial disclosures and increased transparency of any public appearances by the justices.

Who has the better argument?

In the end, it really boils down to how much faith the public places in the nine members of the nation’s court of last resort.