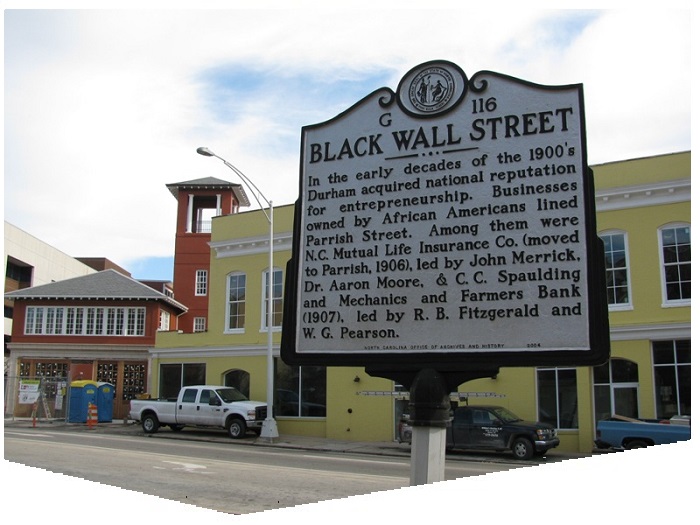 The Rebuilding Of Black Wall Street

Most of the story about the 1921 Tulsa Race Massacre centers around the destruction of what was known as “Black Wall Street,” a bustling 35-square-block area with Greenwood Avenue running through the center. Those stories will tell you that a Black man named Dick Rowland tripped in an elevator, causing a White woman named Sarah Page to scream.

Newspapers printed this interaction, framing it as an attempt at sexual assault, causing an angry mob to swell at the courthouse where Rowland was being held. Tension ignited after a group of armed Black men, mostly WWI veterans, arrived to defend Rowland, and the mob attacked.

With a 26-to-1 advantage, the White mob burned, looted and killed their way through one of the wealthiest Black communities of the time, leaving an estimated 300 dead. Many of the victims’ bodies have still not been found. For most, this is where the story ends.

What isn’t discussed enough is the story of how Black Wall Street rebuilt and how it can continue to build in the 21st century.

The story of Greenwood’s rebirth begins just hours after the massacre. On June 2, 1921, the Tulsa Real Estate exchange attempted to take over the Black-owned business district.

By June 7, with the encouragement of the Tulsa Real Estate Exchange, the Tulsa City Council voted 4-0 to pass fire ordinance No. 2156, effectively preventing Black Wall Street from rebuilding. The Tulsa Tribune applauded the move, according to Randy Krehbiel’s book Tulsa 1921, with the paper stating that, “Because of the building requirements laid on the district it is believed impossible that the negroes will again build there.”

Black Wall Street fought back with the help of Black attorneys B.C. Franklin, Isaac Spears and P.A. Chappelle, along with Mather Eakes, a White attorney from Alabama. Judge W.B. Williams rueld that the ordinance was illegal, giving Black residents in Tulsa a path to rebuild.

By 1926, Tulsa had more hotels than Harlem, New York. In 1929, according to James S. Hirsch’s Riot and Remembrance: The Tulsa Race Massacre and Its Legacy, a social worker by the name of Jessie O. Thomas visited Tulsa and said, “There is probably no other case in the history of America where a group of people in similar hostile community so quickly and so completely rebuilt a ‘new Jerusalem upon the ashes of a fallen city’ with so limited financial resources.”

Today, the Greenwood District finds itself at an interesting crossroads, seemingly caught between its dark past and its bright potential. To the north of where Archer Street and Greenwood Avenue meet, there are a set of offices and shops still standing from that 1923 rebuilding. To the south, there is the new Greenwood Rising history center and a new apartment complex, boasting a bar, coffee shop and art gallery.

As recently as 2019, Tulsa ranked in the top 50 as one of the best places to start a business. This is a far cry from what existed even 13 years ago when I was a teenager, when abandoned buildings and empty parking lots were just as common as weeds in the spring.

While some things have changed for the better, Tulsa still struggles to be what it once was for Black Americans. North Tulsa, which is home to the Greenwood District, makes up 17 percent of the city’s total population but is more than 80 percent Black.

In 2014, Tulsa ranked within the top 20 cities for national income inequality. Finally, 35 percent of north Tulsa’s population lives in poverty compared to 17 percent of the rest of the city. Rebuilding in the face of these obstacles will not be easy.

Looking to the Future

In my research I have identified three key areas of focus that can help continue with rebuilding: Government incentive-driven reparations, individual financial management and community-level strategic spending (two of these areas will be discussed below).

It is important to note that many of the problems that still plague the Black community in Tulsa were created intentionally and explicitly through government policy such as Fire Ordinance 5126, but also through less obviously targeted government-led actions, such as building a highway through the heart of the Greenwood District.

“There are two ways which will destroy a black community. One is by building a freeway through it, the other is by changing the zoning laws,” said Dr. John Hope Franklin in Scott Ellsworth’s 1992 book Death in a Promised Land.

Potential policy measures to create an environment to rebuild Black Wall Street could include direct payments and incentives to descendants and living survivors. Cities like Asheville, North Carolina, and Evanston, Illinois, have approved payment of reparations through homeownership incentives.

The odds that reparations will happen in the case of Tulsa are unlikely according to some, especially considering that the federal courts dismissed a 2003 lawsuit filed against the City of Tulsa and the State of Oklahoma for civil rights violations related to the massacre. In 2005, the Supreme Court refused to take up the case.

At the private and individual level there are ways to improve and rebuild the legacy of Greenwood. It was two men, O.W. Gurley and J.B. Stradford who used their personal funds to buy tracts of land to sell to Black Americans.

Today, some of those same investing techniques could be employed to spur financial stability one household at a time. In my book, From Burning to Blueprint, I argue that Black Americans should lean more heavily into assets that are less discriminatory, like the stock market and cryptocurrency.

This is primarily because the real estate market is where Black Americans are most often discriminated against—and it was one of the central reasons why Black households didn’t recover from the 2008 financial crisis.

By 2012, the median net worth for Black families was down 50 percent, compared to 16 percent for White families. We also know that Black homes are devalued by an average of $48,000 per home, which amounts to $156 billion in combined losses. Compare this to the U.S. stock market, where pricing and profit is transparent, with no gaps in profit when input factors like time and starting capital are the same.

In 2021, I still see a resilient and innovative base of young community leaders and business owners who have been working tirelessly to move the needle forward. From companies like the Black Wall Street Times and Fulton Street Books to arts and cultural projects like Fire in Little Africa to Art 4orms, Greenwood is very much alive. And like our ancestors before us, we too will rebuild.