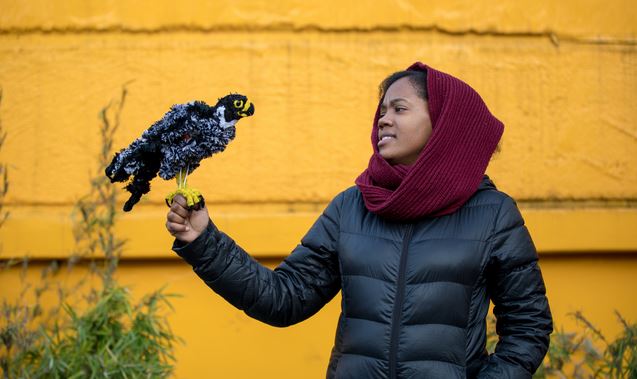 Birding Is Booming. So Where Are the Black Birders?

Tiffany Adams grew up in the Chelsea-Elliott Houses, a sprawling, low-income housing project on the west side of Manhattan. There, cookie-cutter brick buildings are separated by modest courtyards with benches and tables. Trees and grassy yards enclosed by black, wrought-iron fences dot the fringes of the project. The scant open spaces could seem confining, except to young girls with dreams of growing up to become zoologists or to tired, hungry birds navigating the Atlantic Flyway.

During her youth, Adams escaped to the natural world by watching National Geographic and the Discovery Channel. Five years ago—on a lark, so to speak—she attended a bird walk in Central Park. Looking up in the sky, she saw a world that she could not unsee, even upon returning to her housing complex. There, right outside her door, she saw an unexpected number of avian species—northern parulas, black-throated blue warblers, black-throated green warblers. She hasn’t stopped looking.

“Not too many people saw the value of birding in the projects,” Adams says. “But when they’re migrating, birds don’t say, ‘Oh no, those are the projects, I’m going to go to Central Park. I got to eat, I got to rest, and I got to find a mate. So whatever habitat is suitable to doing those things, I got to find it.’ Ecosystems don’t stop according to neighborhoods.”

A lot of people don’t get Tiffany Adams mostly because she’s Black, and, well, everyone knows Black folks don’t watch birds. Though the outdoor activity is booming in this country, birding is as White—93 percent, according to the most recent U.S. Fish and Wildlife Service survey—as the feathers of a whooping crane. The field markings of the typical American birder would be: White, female, 53 years old.

One of the uncommon species, Adams now is a self-trained ornithologist who last year completed a master’s degree in urban environmental education at Antioch University in Seattle. She also has the special ability to create various species of birds out of pipe cleaners. Even so, many people refuse to take her ornithological pursuits seriously. Her bona fides still are questioned when she posts about birds on social media.

Or friends misunderstand her passion: One messaged her with a question about a sick cat.

“My friends think either I’m a veterinarian or I’m doing this as a hobby, or that I’m a hippie—and I’ve actually been told that,” Adams says. “For a while, I really felt insecure. Ultimately, I could not stop watching birds. I’ve learned to embrace my nerdiness.”

John Robinson, a Southern Californian who has birded and advocated for Black birding for decades, has a theory about that. He calls it the “Don’t Loop.” It’s simple: African Americans don’t bird because people don’t engage in activities in which they don’t see people like themselves. For Black people and bird-watching, it’s a self-perpetuating scarcity. Bird-watching is not ingrained in the culture the way it is for a lot of White families and doesn’t get a generational handoff.

Robinson surmises that he joined this rare flock because he was comfortable growing up as the only Black kid in a Jewish neighborhood. So it wasn’t a big leap for him when White friends took him out hiking and birding in college. Still, he hid his passion from Black friends who wouldn’t understand and White people who might be suspicious.

It was 1979 when Robinson, then in his 20s, picked up his first pair of binoculars. “I knew I was different,” says Robinson, whose book Birding for Everyone: Encouraging People of Color to Become Birdwatchers was published in 2008. “I felt like I didn’t fit in. I felt like I needed permission.” In public, he hid his binoculars inside his coat.

Few recognize this double dose of isolation better than Dudley Edmondson. He wrote and photographed a book, Black and Brown Faces in America’s Wild Places, published in 2006, about 20 African Americans with deep connections to the natural world. One of the stories is his own.

Nature, for Edmondson, provided refuge from what he calls “the trauma from my dad’s alcohol-fueled rages.” He also had a strong sense of being, as he put it, “an odd duck” while growing up in a Black, mostly blue-collar neighborhood in Columbus, Ohio. The kids teased Edmondson, calling him Euell Gibbons, after the celebrated outdoorsman best known for a 1974 national television commercial for Grape Nuts cereal, which he opened by asking, “Ever eat a pine tree?”

Edmondson hadn’t, and he wasn’t a 63-year-old White guy, either. His tormenters simply worked with the material that was available—and that was Whiteness. Edmondson now lives in Duluth, Minnesota, where he frequently comes across strangers who know him because he’s the area’s “Black guy who recreates.” It gives him the sensation of constantly being watched or monitored.

Not long ago, Edmondson was working on a book about Minnesota wildflowers. He was taking images of some invasive species in his own neighborhood, when a White woman challenged his motives.

“You don’t look like any nature photographer I’ve ever seen,” she said.

“I’m calling the police,” she said.

It was the first time ­Edmondson recognized the phenomenon “birding while Black,” the close cousin to driving, barbecuing, or sitting in Starbucks while Black.

Edmondson’s friend J. Drew Lanham has had a lifelong obsession with birds and describes himself as a “band geek” who played the bassoon. “I’ve always taken pride in being different,” he says. In exchange, he earned the mantle of the Black birder. His hilarious riff on the stigmatized experience of the African American bird-watcher, “9 Rules of the Black Birdwatcher,” first appeared in Orion magazine and later went viral as a video produced by BirdNote, a public radio series about birds.

A professor of wildlife ecology at Clemson University, Lanham, like Robinson, did not meet another Black birder until he was well into his 40s. He grew up on farmland in South Carolina, frequently encountering birds while passing between his parents’ and his grandmother’s houses. He liked to lie on the ground and gaze up at circling hawks. His grandmother told him they’d peck his eyes out, so when they came within 50 or so yards, he jumped up. “I liked my eyes,” he says. He grew up wanting to fly, tried often, and just as often hurt himself during the attempts.

J. Drew Lanham, left, a professor of wildlife ecology at Clemson University, watches a bald eagle with others at Seattle’s Seward Park. Lanham says he did not meet another Black birder until he was well into his 40s. Photo by Glenn Nelson.

These days, when he’s not flushing bobwhite quail, Lanham likes to talk about range maps for humans, linking the concept of showing geographic distribution of birds to the realities of race in the U.S.—where people of color like him can and cannot be. Not long ago, he added Seattle to his personal range map. That’s where he met Joey Manson in Seward Park, at an event for BirdNote, on whose board Lanham sits. While driving in, Lanham noticed Manson waiting to greet him, but it didn’t register that Manson, a Black man, was the director at the park’s Audubon Center. It was an emotional meeting for both. “This is a place that is willing to be different,” Lanham says.

Manson studied glass design at the University of Maryland and ended up in the Puget Sound region, where he got a job running the Audubon store at Seward Park. During his job interview, he stressed that he knew little about birds. Four years later, he’d absorbed enough to be hired as the center’s director, positioning him to break Robinson’s “Don’t Loop” by introducing birds and nature, meaningfully and intentionally, in a highly diverse area of one of the country’s most White—and affluent—major cities.

Manson had two epiphanies along the way. On a ride into work one day, he was wowed by a bald eagle snatching a fish out of Lake Washington. Later, he introduced a kid from his apartment building to the outdoors. Nati, who is from Eritrea, told Manson, “Birds are boring.” That attitude changed when, during an Audubon summer camp to which Manson transported him, Nati saw a pileated woodpecker for the first time. The Woody lookalike supplied an avian turning point for Nati, just as the eagle had for Manson.

Last summer, Manson led a bird walk through Seward Park for the ­Seattle chapter of Outdoor Afro, a national organization seeking to connect African Americans to nature. As part of the prewalk orientation, Manson screened the Lanham video, “Rules of the Black Birdwatcher.” Later, when Manson waxed poetic about hummingbirds and the J-diving mating maneuver of the males, Obra Smith, a teacher originally from Memphis, Tennessee, beamed at every word. Her enthusiasm never waned. “That was amazing,” she said while debriefing with other group members after the outing.

Earlier in the day, during the first bird-related outing in her 49 years of life, Smith had peered into a spotting scope, noted the iridescent throat of an Anna’s hummingbird, and pronounced it a male. She didn’t make such a declaration with utter conviction, but with a hint of doubting intonation. She would delight in being told that she was right as rain—well, it was Seattle, after all.

Two weeks later, Smith returned to Seward Park with Tsion Kahssai of Ethiopia, whom she met at the Outdoor Afro walk. Their second time out, the two Black women sampled the forest’s winged delights on their own.