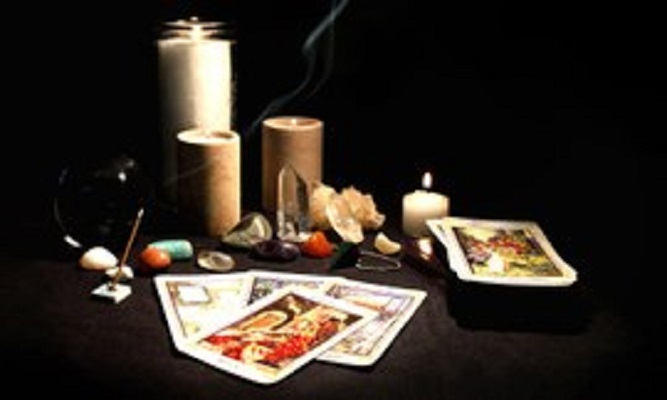 Once taboo, tarot reading is considered spooky, and even wicked by some. But the form of divination that uses cards dates back to the 15th century—and has become the latest spiritual trend. Decks are sold at almost any store, and hundreds of thousands of Instagram and Facebook pages are dedicated to the art of divination. But some practitioners in the United States have been using the cards for decades as a tool in their spiritual practices as they turn away from Western religions for traditional African-centered and Indigenous spiritualities.

Thirty-five years since the release of Jambalaya: The Natural Woman’ s Book of Personal Charms and Practical Rituals, by teacher and author Luisah Teish, African-American and Latinx women are increasingly embracing alternative spiritual practices in earnest through a variety of means.

Released in 1984, the book, which begins with the idea of “reclaiming our magic,” has been at the forefront of the rebirth of a nature-centered “Woman Spirit” movement.

Teish began her spiritual search as a tarot card reader. She posits in her book the historically understood ideas that most Western religions were based on African-centered spiritualities, and that these practices could fight patriarchy and racism. She also encourages Black women to become familiar with African deities like Yemaya, the mother of the sea, or Oya, the Goddess of wind, water, fire, and rainbows.

Today’s harsh political landscape, the reinvigoration of the fight for equality, and a backlash against the strict traditions in traditional churches have revived the book’s message, and alternative spiritual practices become more popular than ever.

In Detroit, Melodie Powell created the Detroit Blk Gurls Do Tarot Facebook group to empower Black women in traditional spiritualities. It now has more than 100 members. Powell, known as Melody Mecca, says she started the group because she knew other women who, like her, were looking for a safe space online where members could lift up and encourage each other, as well as help each other grow with the tool.

“Taking a glimpse in other tarot guilds and groups, the majority of members didn’t reflect who I was: a Detroit Black woman who had an interest in tarot and other divination forms,” Powell explains.

Detroit Blk Gurls Do Tarot has held several in-person events including Tarot on the Porch, where members of the group gather to read each other’s cards and discuss issues that affect their daily lives—motherhood, sisterhood, etc. They plan to do more readings soon as paid opportunities for the professional readers in the group.

“It’s not just on social media anymore,” Powell says. “We actually meet and have had opportunities to see and feel each other in physical spaces. That’s been the magic in it.” Other group members describe the experience as encouraging safe spaces.

Renea Dooley, a practitioner and member of the Detroit group, believes tarot can help in today’s political climate. “It’s a tool that shakes people out of their angst and helps them see and respond to situations in a different way,” Dooley said.

Detroit Blk Gurls Do Tarot’s purpose is also to support its members because of the taboo nature of tarot in the Black community. In the group, members can openly discuss their passion for divination free of judgment, post daily card pulls, and ask questions about pulls from more seasoned members.

Detroit Blk Gurls Do Tarot supports its members due to the taboo nature of tarot in the Black community.

Nefertiti Harris, a priestess and oracle card reader, is a member of the group. She has used tarot cards for more than 20 years, and is a spiritual adviser to younger practitioners.

“Tarot [itself] is not a spiritual practice,” explains Harris, a Detroit proprietor, “but it is a good tool that can be used in practice.” Harris, who owns the natural hair care salon, Textures, created a recurring event called Tea & Tarot, where readers and seekers gather to enjoy tarot practice, uses tarot in conjunction with other spiritual and religious resources.

“It’s important to me that even though people, and especially Black women, explore different ways of finding themselves that they don’t get away from the scriptures,” says Harris, in response to the rising numbers of Black women who are leaving traditional churches. “The scriptures themselves are a source of power that have empowered our people since enslavement.”

While there are some practitioners who share Harris’ affinity to the Bible, others are not as devoted.

“Traditional religion never appealed to me,” says Nodja Johnson, a Detroit native spiritualist who is now based in Austin, Texas. Johnson’s alternative spiritual practices include a passion for crystal therapy, and most especially tarot card reading. A natural empath, Johnson has always felt drawn to understanding and interpreting energy of people and places. “I can feel the energy immediately when I meet someone, and that’s been very useful in my practice.”

Johnson is a professional tarot reader who recently committed to do that work full time. Known as @Gypsy_Hussle__ on Instagram, her name was chosen in homage to the late rapper, Nipsey Hussle, who was known for his entrepreneurship as much as his rap career. She plans to launch a website and blog by the same name to reach others who are interested in alternative spiritual practices.

Johnson says she became interested in divination in her teens, and began using tarot cards when she saw them in a movie, “It was so intriguing,” she says, “I found a set of cards at a bookstore the following weekend and bought them immediately.”

“Tarot pulls things out that we unintentionally hide and may not quite understand.”

Through tarot, she says, she can usually help someone feel better about a situation.

“Most people ask about love or money. It’s encouraging even when I have to tell them the opposite of what they are hoping for. That reassurance from their spirit guides is comforting.”

Tarot and other tools like crystals for healing, and understanding and healing the chakras, does not have to be exclusive from traditional religious paths, Harris says.

“At the end of the day, everyone is seeking to know themselves and their place in this universe better,” Harris says. “Seeking can take a lot of different forms. I, personally, practice a spiritual faith that is rooted in African culture. For me, the most important and impactful practice in my life has been to have reverence for my ancestors.”

In Jambalaya, Teish has entire chapters dedicated to ancestor reverence. She encourages having an altar in the home specifically for the veneration of ancestors.

In this sense, explains Harris, “we are able to heal our past, present, and future.”

Dasia Denise, an Atlanta native, practices tarot and creates intention oils and crystal jewelry on her website, Herbal Crown, for the purpose of healing says she feels these tools and practices is something every Black woman needs.

“Tarot pulls things out that we unintentionally hide and may not quite understand,” says the 25-year-old. “[It] is a specific way to heal when dealing with a specific trauma or situation.”

These ancient practices— ancestor reverence, the building of altars, and the use of divination— have often been referred to as witchcraft, and in some cases Wicca, more specifically. While the practices are on the rise among Black women, not all tarot readers are Wiccans, and most alternative spiritual practices by Black women predate what mainstream society has deemed as witchcraft.

For the women of Detroit Blk Gurls Do Tarot, alternative spiritual practices have provided them with a voice and a way to help others.

For Johnson, it’s also been a way that she too has grown as a person.

“I’m more patient, more optimistic,” she says. “I feel so much stronger and in tune with my own life and living in my purpose.”