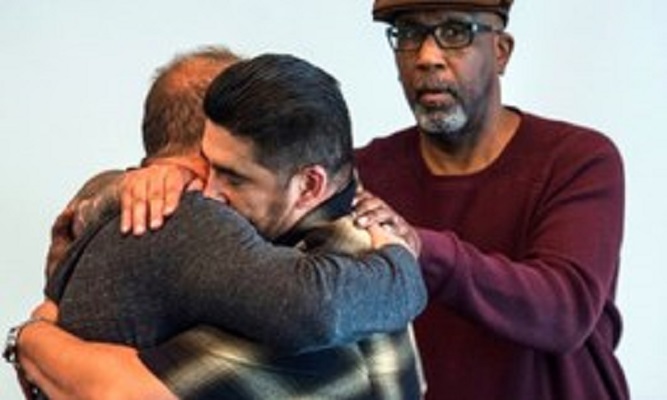 Ending Domestic Violence Requires Working With Those Who Harm, Too

Prompted by experiencing domestic violence in her own family, Jacquie Marroquin started working in the violence against women movement in California in 2001. In doing so, she recognized an irony. Marroquin knew all of the support systems available for victims of domestic violence and how to best use them, and yet she knew her own family would never take advantage of those services.

Their situation isn’t uncommon. In Marroquin’s work as the director of programs for the California Partnership to End Domestic Violence, she sees families who don’t want to send their loved one to jail or separate from their partner who has been harming them.

Involving law enforcement can extend the trauma of partner violence, especially for communities of color who already experience police brutality and incarceration at disproportionate rates. Mandatory arrest policies that were created to protect victims from their abusers can trap families within the criminal-legal system, exacerbating poverty, racial inequality and family instability—conditions that are linked to increased levels of violence.

A survivor-centered approach, which focuses on the rights, needs, and wishes of the survivor, means providing other options.

“In order to prevent and end domestic violence, we have to start talking to folks on the other side,” Marroquin said, referring to the people who are doing the harm.

The Healing Together Campaign by the Alliance for Boys and Men of Color is working to spark that conversation on a national level. The campaign, launched in October, Domestic Violence Awareness Month, aims to end intimate partner violence by advocating for policy changes. The campaign also promotes separation from the punishment of the criminal-legal system and promotion of community healing through accountability, specifically by including those doing the harm—the majority of whom are men—in the healing process.

Involving men in the movement to end domestic violence isn’t a new idea—scholars have been citing the positive impact of male allyship for more than 20 years— but including the “batterers” and “wife beaters” is an innovative approach that embraces the healing process of both the survivor and the person who’s harmed them.

“We’ve received a ton of pushback,” said Marc Philpart, principal coordinator for the Alliance, referencing people in the movement to end domestic violence, as well as the general public. “There is a belief [among some] that some people are deserving of healing and others are not.” But, he says, they’ve also received a lot of support.

Philpart described the need for healing as a continuum, not a binary. Boys who have been harmed are more likely to turn into men who harm others. Strictly punishing domestic violence with incarceration does nothing to end that cycle.

Complicating the conversation happens at the community level.

The campaign identifies the root causes of intimate partner violence as policies that create economic insecurity and community fragmentation, harmful norms about masculinity that limit men and harm women, and childhood exposure to partner violence that increases the risk of partner violence in adulthood. The Alliance for Boys and Men of Color is a national network of more than 200 community organizations aiming to advance race and gender justice through policy and community activism. Many of the organizations were already implementing types of community healing before the campaign, so the official launch acted as a way for the partners to have a wider-reaching impact.

To address policy issues, Alliance coordinator PolicyLink, a national research and action institute for racial and economic equity, published a paper with policy recommendations. Some of the initial suggestions focus on funding prevention efforts, shifting the responsibility of intervention programs to public health departments, and expanding “restorative responses” to intimate partner violence to decrease contact with law enforcement.

Philpart, who is also a managing director for PolicyLink, said that if programs want to prevent intimate partner violence, the conversation must include racism, sexism, slavery, colonialism, and patriarchy.

“When we start to look at violence against women more broadly, it really is a vestige of all of societal ills of a nation that has birthed those ills,” Philpart said. In essence, Philpart and the other alliance partners believe it’s time to “complicate the conversation” around domestic violence.

Complicating the conversation happens at the community level, he says.

In Stockton, California, Fathers & Families of San Joaquin, an organization for racial justice and community healing, has always looked at the intersection of gender justice and racial equality as a way to treat violence in its community.

Last year, 76% of intimate partner violence reports in the county stemmed from Stockton.

“The issue of violence is an epidemic in our city,” said Samuel A. Nuñez, executive director at FFSJ. “These are not normal behaviors, but we’ve normalized them because of what we’ve been exposed to.”

Nuñez believes the cycles of abuse and violence in his community make it ground zero for implementing a more comprehensive approach.

The organization holds regular community conversations for victims of all kinds of violence, and also offers parenting classes, youth mentorship programs and has a trauma recovery center that offers free mental health services. The programs are building towards a culture shift, not a quick fix, Nuñez said.

All month long, the alliance has been encouraging organizations to host men’s circles to discuss ideas of healthy manhood and men’s role in ending violence in their community. Interested organizations and advocates who sign up to facilitate a men’s circle will receive a two-page guide from the alliance with tips on how to foster productive conversations. The tips include establishing ground rules such as keeping shared stories confidential and using “I” statements when sharing experiences, as well as potential questions for the participants, like, “What were you taught about women and girls growing up?” and “What is your role in preventing violence from occurring in your home, family, and community?”

While groups could request to be connected with a more experienced facilitator in their area, like a leader at an alliance organization, Philpart said there is a fine line between ensuring an expertly led conversation and the conversation becoming too professional and no longer accessible.

If people don’t see themselves reflected in the leadership of the circle, they will resist participating.

“We don’t want people to recklessly engage in these dialogues,” Philpart said, which is why the alliance provides the tip sheet. But, the risk of an ineffective conversation by an unskilled facilitator is worth the reward of having stronger buy-in from community members and popularizing these discussions.

While the campaign is informed by the intersection of racial inequality and intimate partner violence, Philpart said, the circles aren’t strictly for boys and men of color. In line with the goal to create a healthy community, he hopes the circles have participants across the gender and race spectrum.

Of course, the people who take advantage of men’s circles and their local alliance organization’s support are the people who are interested in making a change. While it may start with a few committed community members, the alliance envisions a chain reaction of healing that spreads through the communities the 200 partner organizations serve and breaks the cycle of generational violence.

“We’re in the midst right now of an evolution in the domestic violence field,” said Marroquin, at California Partnership to End Domestic Violence. “These are options survivors have been asking for.”