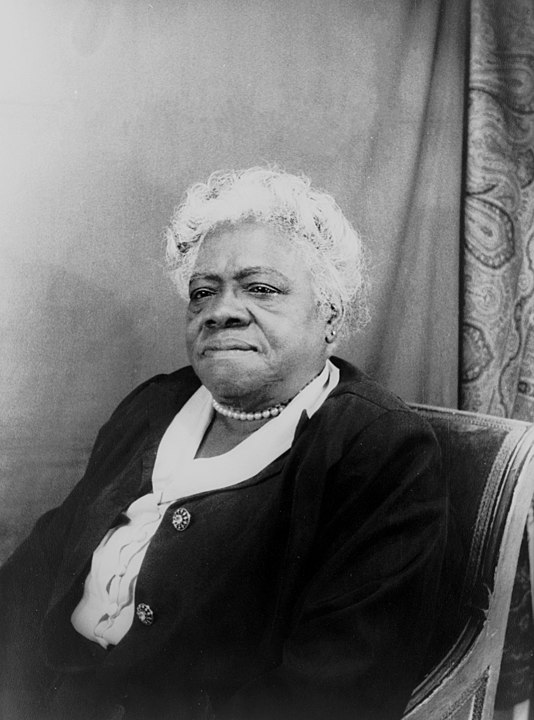 Mary McLeod Bethune The Most Famous Black Woman In The World

March 9, 2020
Mary McLeod Bethune founded a college, defied the Klan, advised presidents, and like my grandmother, was a fierce warrior for justice.

Born in 1914, Dovey Johnson Roundtree was subject to the double barriers of institutionalized racism and sexism, but rose from poverty to become a distinguished champion of civil and women’s rights. As a member of the Women’s Army Auxiliary Corps during WWII, she helped desegregate the US military. She went on to become a crusading lawyer, winning a landmark bus desegregation case in 1955. As a minster in the 1960s, she was in the vanguard of women ordained as leaders in the AME church.

In her memoir, Mighty Justice: My Life in Civil Rights, Roundtree describes how the support of community, mentors, and family nurtured her career. In this excerpt, Roundtree encounters a friend of her grandmother’s, the inspiring Mary McLeod Bethune.

In the 1920s, the most famous Black woman in America, if not the world, was Mary McLeod Bethune—educator, activist, and consultant to President Coolidge. That such a woman should have called upon my grandmother, should have huddled with her in close conference upon the broken-down sofa at our house at 905 East Boundary Street, should have consulted with her on the future of Negro children, defies the laws of chance and, indeed, every reality of the social hierarchy, at least as we know it today.

Yet consult with Grandma she did. The first time I laid eyes on the great woman, I was perhaps 10 years old. She was nodding gravely as my grandmother spoke and sipping a tall glass of Grandma’s homemade locust beer. Though Grandma’s schooling had ended at the third grade, and Dr. Bethune presided over the education of college students at the Florida institute she herself had founded, they addressed each other in the manner of old acquaintances and trusted allies. She called Grandma “Rachel,” and Grandma in her turn called her renowned visitor “Mary.”

I never did come to know precisely how the two of them met, but this was the era of the Black women’s club movement, which cut across class lines in a way that has no modern counterpart. Any one of my grandmother’s connections—her close friendship with Charlotte’s NAACP president, her relationships with wealthy Black ministers’ wives, her office in the prestigious Order of the Eastern Star—might have placed her in Dr. Bethune’s path as she barnstormed through the South in the ’20s, recruiting women for the National Association of Colored Women’s Clubs. Whatever their initial connection, I am entirely persuaded that having met once, my grandmother and Dr. Bethune were drawn together in the way kindred spirits are in great struggles.

No two women I have ever known—and in adulthood I would come to know Dr. Bethune very well indeed—fought for justice quite so fiercely as those two.

Even as a child of 10 or 12, I sensed in Dr. Bethune something powerful, almost regal. Ebony-skinned and crowned with an enormous feathered hat that matched her silk suit, she spoke in a voice so rich, so cultivated, so filled with authority that it held me fast. By the time my grandmother knew her, she was already a figure of legend, a woman who had done the unthinkable: she had defied the Klan, alone. I knew what that meant, for I carried with me from one terrible night in my earliest childhood the shadowy memory of men howling and whips lashing and horses’ hooves pounding outside our house, of hot darkness pressing on my neck, of the muffled sound of my sisters’ sobbing, of Grandma’s feet dragging on the floorboards as she paced, and the clear awareness that not even my grandmother for all her boldness could have protected us if the men in the white hoods had determined to do us harm.

That Dr. Bethune had taken on that nameless horror stunned me. But she had, rather than abandon her campaign for Black voting rights. She’d faced down the Klansmen who’d threatened to burn her college to the ground, so the story went, turning the campus floodlights upon the horde of hooded men with their torches and leading her girls in the singing of spirituals, one after another, until at last the men turned their horses around, and rode off into the night.

And there were so many other stories, told and retold among church folk and the ladies’ societies Grandma entertained. They spoke of the world-renowned woman who’d begun life as Mary Jane McLeod, daughter of freed slaves. Alongside her sixteen brothers and sisters she’d picked cotton in the fields of Mayesville, South Carolina, until with her brilliance she captured the attention of a Black missionary who’d seen to her schooling. Barred because of her race from the missions of Africa to which she felt called, she’d taken on the fight for Negro advancement as her life’s work. In a tiny cabin with five pupils, she founded the Florida normal school that would eventually become Bethune-Cookman College, and as a child I loved to hear the tales of how she’d used packing crates for desks and elderberry juice for ink and raised funds by selling sweet potato pies. Later, when poll taxes shut Blacks out of the voting booth, it was said she took to bicycling around the countryside collecting money to pay them.

No church paper in those days failed to mention her, and when the weekly newsletters arrived from the AME office, Grandma would scan the headlines in search of Dr. Bethune’s name, then command Eunice or Bea or me to read the article aloud, often more than once. If Dr. Mary McLeod Bethune, child of slaves, could rise from poverty to command the attention of presidents, Rachel Graham’s granddaughters could do the same. In fact, Grandma insisted, we would do the same—or she’d know the reason why not.