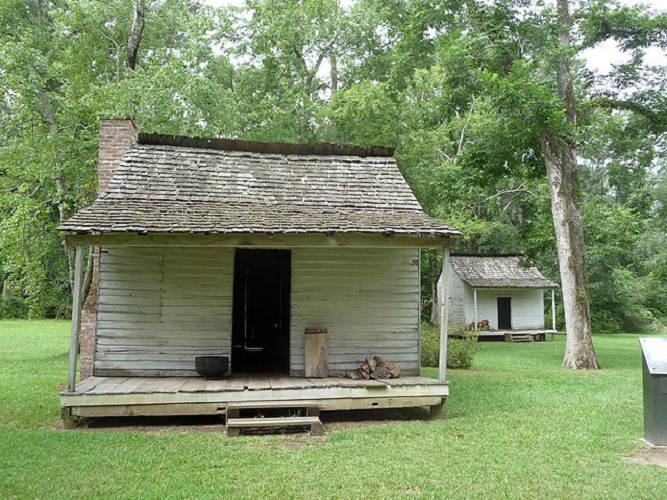 By 1860, more than 40,000 plantations in the United States each had 20 or more enslaved Africans. Today, hundreds of those same plantations operate as museums, but only a handful tell the stories of the enslaved who lived, toiled, and died there. Meanwhile, lifestyle magazines tout plantations as a destination—weddings have become the latest trend—emphasizing their idyllic verdant settings and stately architecture.

The Whitney Plantation is the only plantation, of the 375 existing locations, expressly designed to center the narrative of slavery, but Black conservationists and historical interpreters such as Joe McGill are collaborating with plantation owners, government agencies, and the public to center the history of enslaved Africans at those historical 46,300 plantations, and broaden the discourse around slavery.

McGill initially founded the Slave Dwelling Project to protect the outbuildings that served as homes for his enslaved ancestors, which are the structures most at risk for being removed or falling into disrepair on a historic plantation properties. He had firsthand experience with the renovation of such structures while working as a historical consultant on the Magnolia Plantation near Charleston, South Carolina.

“They put together a team of experts to come in and evaluate the work that was being [done]… as they were progressively restoring them,” McGill explains. “And that inspired in me the desire to ask the owners of the plantation… to spend the night in the cabins.”

McGill, a Civil War reenactor inspired by the 1989 film Glory, about an all-Black regiment of northern soldiers, was already used to sleeping at historic battlefields. He had also slept in a slave cabin at Boone Hall Plantation, also near Charleston, for a History Channel documentary in which he participated.

But this felt different. “It had more purpose, and the purpose was to bring attention to these often-neglected dwellings,” he says.

McGill anticipated this project would be “one and done,” lasting only a year. Then he acquired a list of plantations from the Historic Preservation Office and discovered how many plantations with slave dwellings there were. NPR coverage of the project led to greater exposure, and McGill, who is based in South Carolina, started getting phone calls from other states.

“Even as immersed in the subject matter as I thought I was, I knew very little,” he admits. “I had slavery in a box, you know: a [rural] southern plantation. …I wasn’t even thinking about urban slavery and, right there in Charleston, South Carolina, you could find hundreds of slave dwellings within the city limits.”

He also didn’t realize the depths of northern complicity in the institution of slavery. Not only did northerners own enslaved Africans, “they owned the banks, … the insurance companies, … the factories” that financially benefited from the cotton the slaves picked.

Since founding the Slave Dwelling Project 10 years ago, McGill has organized sleepovers in nearly 70 properties in states including New York, Connecticut, Delaware, and Wisconsin. He has also stayed at Thomas Jefferson’s home, Monticello, where, like 11 other U.S. Presidents, the primary author of the Declaration of Independence enslaved 400 people.

What’s it like to sleep in a slave cabin?

“My mind just began to race, and I began to think about how many people slept in the same place where I slept and pondered… What [was] life really like outside of this?” he recalls. “How do you in that moment, when you realize that you are a slave, how do you then sleep at night? Trying to figure out how to get away from this system [so] that you wouldn’t get caught before you were free.”

Like McGill, Williams’ first sleepover was also at Magnolia Plantation, which, after many subsequent events, he says now feels “like home.” But he says the cabins and even the night spent in them is not the most powerful aspect of the Slave Dwelling Project’s work: “The difference is made in the campfire conversations.”

White and Black participants both attend Slave Dwelling Project sleepovers. Before they bunk down for the night, the group engages in a conversation that seems to be equal parts learning, reckoning, and healing. In separate interviews, both Williams and McGill recount the same story at Magnolia Plantation, about a White woman who listened to the conversation but didn’t speak until right before bedtime. She then opened up about her complicated and abusive relationship with her father, a Ku Klux Klan leader who was now dying of Parkinson’s disease.

The Slave Dwelling Project’s main goal is to protect tangible cultural heritage and to center the narratives of enslaved Africans by transporting Black and White participants to the place where they lived, communed, and slept after incessant days of back-breaking labor and vicious brutality. And yet, Williams finds dignity and cause for celebration in their stories.: “Our people were not a hopeless people,” he says. “Although they seem like they were in hopeless situations, they thrived.”