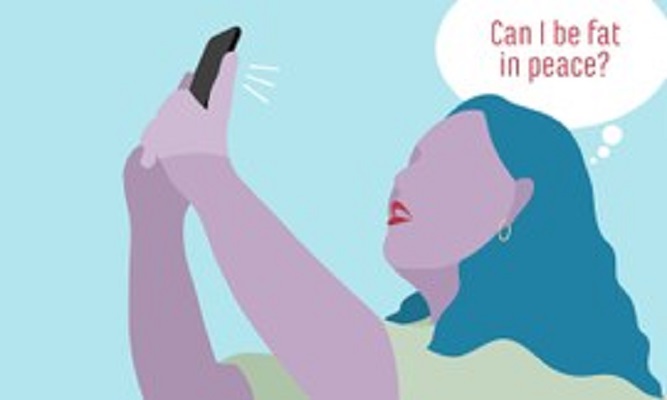 The Fear of Fat: Our Last Acceptable Bias

The U.S. has a problem with its weight—but not in the way you might think. According to the Centers for Disease Control and Prevention, more than 70% of Americans are either overweight or obese, but there’s another side to the “obesity epidemic” that isn’t spoken about enough: fat bias.

Americans who aren’t fat live in fear of becoming so. An estimated 45 million are on some kind of diet. According to a Gallup poll, 45% of Americans fret about weight, and in one study, almost half of girls ages 3 to 6 said they worried about being fat.

This is not new.

The 20th century opened with a rip-roaring debate about corsets. Should women continue to wear them to look slender? What about the intestine-constricting health risks that come with cinching one’s waist for hours? Fainting became so common that wealthy women had fainting rooms in their homes, where they could recover from swooning episodes. Women, under extreme societal pressure, wore corsets despite medical advisories.

In 1921, a man named G.B. Pulfer wrote in trade journal “Corsets and Lingerie” that “fear of sagging bodies, fear of lost figure, fear of shiftless appearance” kept women in corsets. He was tapping into a fear that had begun to haunt America’s cultural ethos: the fear of fat.

By the late 19th century, doctors campaigned to persuade the public that thin people lived longer, and were more stable and attractive than their fat counterparts. Some doctors “happily exploited the commercial opportunities of more weight-aware and weight-anxious populations in the middle 1800s,” writes Jayne Raisborough in Fat Bodies, Health and the Media. For the first time, the market flooded with diet products such as Kellogg’s Safe Fat Reducer and Dr. Vincent’s Anti-Stout Pills.

After World War II, the fear of fat coalesced into a phobia, Stearns says. By the 1950s, psychologists began to argue that being fat was symptomatic of “maladjustment and insecurity,” and that fat people were “miserable, self-indulgent and lacking in self-control,” according to Stearns’ Fat History. “Girls get fat because they’re emotionally disturbed,” was one example of post-WWII pseudoscience quoted in Stearns’ book.

These fears were also tied to White supremacy, says Sabrina Strings, author of Fearing the Black Body: The Racial Origins of Fat Phobia. Faulty race science created the stereotype of “the big Black woman,” and associated fatness with being African. “Thinness became a form of American exceptionalism,” Strings says. It was a sign White people were supposedly more disciplined than the Africans who were brought to North America through the slave trade. This grim history exemplifies how fatphobia was used to bolster racist propaganda.

Fatphobia, defined as the “irrational fear of, aversion to, or discrimination against, obesity or people with obesity,” isn’t just a matter of interpersonal bias. It is a structural issue that affects every aspect of our lives, from economics to psychology. Mary Himmelstein, a researcher who focuses on the consequences of fat-shaming, says, “When you think about weight stigma, essentially you see it everywhere,” from educational settings, to the media, to personal relationships. And this stigma can have many harmful effects.

The last accepted form of bias

The stress of weight stigma affects psychological and physical health, as well as mortality rates and disease burden, Himmelstein says. The mental health effects of this stigma have been correlated with suicidal ideation, depression, anxiety, and eating disorders. In a 2019 study, researchers found that larger-sized children were so anxious about confirming the negative stereotypes attached to obesity that the ability of their working memory was actually reduced.

Researchers Paula Brochu and Victoria Esses say fatphobia is our last culturally acceptable form of bias. Fat characters often exist onscreen to be mocked in television and movies, and their weight is used as a narrative shortcut to explain that the character is lazy or unintelligent (see Pitch Perfect’s Fat Amy.) In Netflix’s Insatiable, the main character dons a fat suit—which implies that using offensive tropes is preferable to hiring an actual fat person.

To this day, fat jokes are still a standby for comedians, and it is still socially acceptable for fat people to be mocked publicly. Researchers Rebecca Puhl and Chelsea Heuer say people justify it “because obese individuals are personally responsible for their weight” and that shame could motivate them into altering their lifestyle.

But embarrassing people into losing weight doesn’t work. In a landmark study of 2,600 adolescents, researcher Janet Tomiyama discovered that being told “you’re too fat” increased weight gain over time, as well as disordered eating.

The economics of being overweight

The internet abounds with forums designed to help people with the dilemma of shopping while fat, a task that often can only be done online. Then people have to contend with the fat tax, a phenomenon where fat people pay more for items such as clothing and furniture. Many airlines require fat people to buy two seats, and mattresses, bikes, and even caskets for plus-sized people cost more.

Some argue that fat people should pay a premium for these items because they use more material. But the clothing industry doesn’t set its costs based on the amount of fabric used—costs are calculated by supply and demand. For example, tall people don’t pay more for longer pants. And if the clothing industry was simply charging for quantity of fabric, baby clothes would be the cheapest purchase around.

Another way fat people are economically disenfranchised is professionally. Studies show that overweight people get hired, paid, and promoted less than their thinner peers. One survey indicates only 15% of hiring managers would even hire an overweight woman, and weight discrimination is actually legal in every state but Michigan.

Insurance companies can legally charge higher rates for people whose Body Mass Index is over 25, despite the fact that BMI has a complicated, medically contested history. Even prescribed medications like Plan B, birth control, and antibiotics are often ineffective for fat people.

The medical costs of being fat

Being overweight means receiving inadequate medical care. Doctors spend less time with fat patients and show them less empathy. When fat people go to the doctor, they are often just told to go on a diet, regardless of what other medical issues they may have. Half of the women in a 2013 study said they delayed going to the doctor until they could lose weight.

“There’s no way to tell how healthy someone is, just based on their appearance,” Himmelstein says. While obesity can increase the risk of heart attacks and diabetes, it is possible to be metabolically healthy while fat. In some cases, obesity can even be an advantage when it comes to certain diseases.

But our $72 billion dollar weight-loss industry doesn’t work. Scientist Traci Mann has spent most of her career proving that diets are better indicators of long term weight gain than they are of anything else. And the term “diet,” with its now negative connotations, has been replaced with “health,” thanks to the rise of pseudoscience outlets like Gwyneth Paltrow’s goop and a slew of Instagram “health” influencers. But according to Himmelstein, it’s really the same thing: “People say ‘I want you to be healthy,’ which is code for ‘I want you to lose weight.’”

Because of a sexist, racist history of anti-fatness, and a for-profit “health” industry, we have a pervasive and “acceptable” bias that harms people every day. But we’re not stuck with it. “To start, one of the most important things that individuals can do is examine their own biases,” Himmelstein says. “Being aware of these biases can help reduce discrimination, just like it would for any other stigmatized identity.”