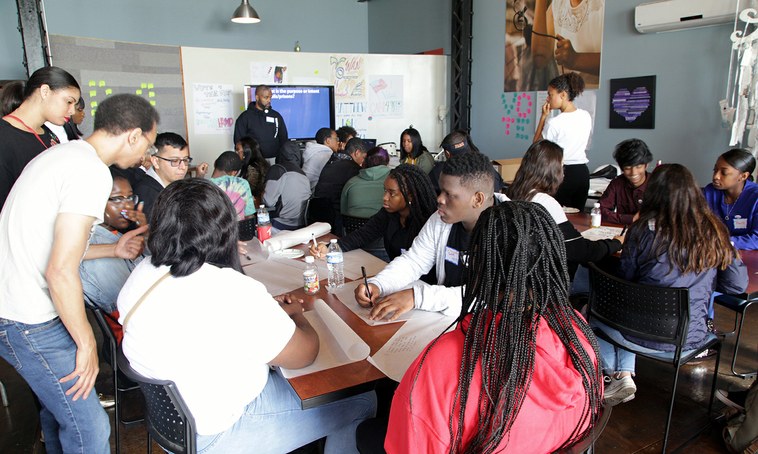 “What Does the World Beyond Jails and Prisons Look Like?”

Roger Stone was just released on a $250,000 personal assurance bond. He does not have to put up one penny. Just to promise to pay that amount if he does not return to court. Meanwhile, my clients are held in jail on $500 bail they cannot afford for stealing a bar of soap.

Talking to Damian Black under any other circumstance, you’d have no reason to believe he was only three months out of prison after serving more than 20 years.

His smile is infectious. And as he shares his story—including his time and experience in solitary confinement—the smile and the brightness in his eyes overshadow what he’s saying.

But it wasn’t just being home with his family—lifelong partner, Stefanie Dixon, and mother of his five sons—after 21 forbidding years in six different Michigan state prisons that was bringing him joy.

As part of an exit program into parole for long-term prisoners like him, Black had been freed from the financial burden of an eye-popping $73,500 in back child support.

The staff at Detroit Justice Center. Photo by Amanda Lewan.

For that, he can thank the Detroit Justice Center, a nonprofit law firm that provides free legal services to indigent clients through partnerships with community organizations and a pilot program for returning citizens in four Michigan prisons.

DJC gives returning citizens like Black a hand in adjusting to life outside prison by helping them navigate the red tape that comes with re-entry and avoid the kinds of problems that could land them back in jail.

But the group is also involved in a broader effort to prevent people from ending up in jails and prisons in the first place.

Last year, it partnered and launched a bail fund with the Bail Project, a national organization started in 2017 to identify people in or at risk of pretrial detention and provide support for their release.

DJC is also suing Wayne County to give residents there a voice in the construction of a new $500 million, four-building jail complex in downtown Detroit, at a time when other cities are reconsidering or abandoning similar projects altogether.

The ultimate goal is to abolish the cash bail system—and jails overall.

“We’re making the argument [that] we do not need to be building more jails,” says Amanda Alexander, DJC founder and executive director. “The reality is the existing justice system does a horrible job. What we do is just throw people in a cage and call it a day instead of actually helping people heal.”

Defense is where they bail people out of jail, help with fines, fees, warrants, tickets, suspended licenses—those things that Alexander says are “keeping people shut out of the economy.”

Offense is their economic equity work, where DJC attorneys help to “shore up the work that Detroit organizers have done over decades,” helping with renter/worker cooperatives and community land trusts, and helping returning citizens start businesses.

“I felt like if I went to court with no money I would go to jail.”

The organization’s dreaming component is done through its Just Cities Lab, where along with Detroit youth and other residents, it considers: “What does the world beyond jails and prisons look like? What does abolition as a presence look like? And what are we building in its place?”

Much of the defense work looks like Black’s case.

Had DJC not intervened, for example, he would have been arrested on a warrant for back child support upon his release and sent back to prison.

Or like that of 23-year-old Antwan Green, who learned of DJC from one of its community partners.

At 17 and not yet licensed to drive, Green, driving someone else’s vehicle, got into an accident and was ticketed.

He said his public defender told him to plead guilty for the incident, and with his family relocating, to leave Detroit and not come back.

He’d already racked up a handful of prior offenses, misdemeanors like “entering without permission,” and “interfering with public duties.”

“I couldn’t afford to pay five tickets,” Green says. “I felt like if I went to court with no money I would go to jail.”

But with the help from DJC, all of his tickets have been dismissed, and he’s a legal licensed driver. “I feel like I’m on top of the world,” he says.

The help DJC provides to people like Black and Green may seem small. But for those who either can’t afford help, or don’t know how to find these resources, it can be life-changing.

Poor people, she says, are being swept up in the criminal justice system, which is cyclical and therefore, by its very nature, causes more poverty.

There are over 400,000 people in the country who are in jail because they can’t afford bail.

She cited the case of a man who had been sharing child care responsibilities for his four children. He lost his job after he was arrested and couldn’t afford bail. His partner quit her job because she couldn’t find anyone to care for their four kids. “This is a family that went from two incomes to no income because of a few hundred dollars that they couldn’t afford to bail out,” Alexander says.

Stories like this one moved DJC to launch the bail fund.

More than 400,000 people in the country are in jail because they can’t afford bail—one quarter of the incarcerated population, according to a report by the Brookings Institution’s Hamilton Project.

In Wayne County, where the county seat is Detroit, 62 percent of people are jailed pretrial—“most of them because they’re too poor to bail out,” Alexander says.

As of February, her organization had bailed out more than 76 people as part of its partnership with the Bail Project, which operates in 13 U.S. cities, including Detroit. A third of those people became DJC clients for other services.

“The idea is that anyone who needs additional services will become DJC clients,” Alexander says, adding the group will provide wraparound service to someone who is bailed out but has other needs, such as housing, a suspended license or something else that’s holding them back.

“The complex is based on plans that are more than 10 years old, and date back to a time when race and equity were less a part of conversations about mass incarceration,” she says.

Alexander and DJC lawyers want people to reimagine the criminal justice system: What does restorative justice look like?

This, she says, is why she came to Detroit. “I was really interested in being where people are thinking in the most visionary ways about the future of cities and that was happening in Detroit—like no other place in the country.”

Through its Just Cities Lab, the group came up with restorative and transformative ideas for reforming the criminal justice system.

Answers ranged from renovating and modernizing Detroit public schools and building community-based restorative justice centers to providing a $10,000 child care tax credit to 53,300 families in Detroit, where 48 percent of the children live in poverty.

So much more data is available now on the harms that jails do and about how they are the front door to mass incarceration, she says. “We can totally rethink this.”