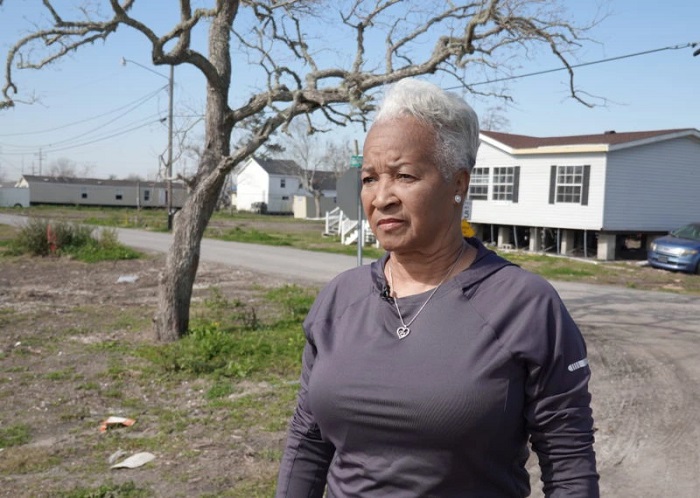 Residents of Ironton, Louisiana are rallying for their share of recovery funds. Audrey Trufant Salvant has deep roots in Ironton, a close-knit, majority-Black community 25 miles downriver from New Orleans.

Her great-great-great grandmother, who had been enslaved, is buried here, and her descendents kept the unincorporated town in Plaquemines Parish alive, despite near-impossible circumstances.

Founded by formerly enslaved people in the late 1800s, Ironton’s residents have since endured racial terror, segregationist parish leaders, and decades without even the most basic services. But they fought to survive. They gained access to running water in 1980 and rebuilt the town after Hurricanes Katrina and Isaac in 2005 and 2012, respectively.

“When you would ask an average person, [what’s] the worst hurricane that hit the Southeast? Automatically, they probably would say Katrina. But I would say, ‘definitely not,’” Trufant Salvant said. “Ida was the worst that hit this community.”

The Category 4 hurricane made landfall in Louisiana on August 29, 2021, with 150-mph winds and a 12-foot storm surge. The state reported 26 deaths, and in the weeks that followed, tens of thousands remained without power. According to one estimate, Ida caused nearly $100 billion in damages across the East Coast, making it one of the costliest hurricanes in U.S. history.

Few places sustained as much damage as Ironton did. Situated on the west bank of the Mississippi River, near Louisiana’s southern coast, the town is particularly susceptible to flooding. Ironton is nestled at the base of a levee on the Mississippi River, where floodwaters advancing from the bayou to the southwest have nowhere to go but into the community’s streets and homes. Of Ironton’s roughly 50 homes, only a handful, including Trufant Salvant’s, survived. Most of her neighbors left after the storm; she said they likely won’t return until they secure the funds to rebuild and elevate their homes.

Reverend Haywood Johnson Jr., pastor of Ironton’s Saint Paul Missionary Baptist church, said Ida was the worst storm in living memory. “It devastated the community to a point where I had never seen nothing like that in my entire life,” he said. Johnson, who was born and raised in Ironton, now lives in Harvey, a suburb of New Orleans. He said his home was not affected in the storm.

The floodwaters dislodged dozens of coffins, which remained scattered across yards and streets for weeks.

Johnson said many of the coffins contained parishioners—friends, relatives, neighbors—he had buried over the years. “It was difficult for me to come and see the people that I laid to rest floating in the yard,” he said.

Johnson and Trufant Salvant worry that if homeowners decide to leave or not rebuild, restoring the fabric of the close-knit community may be impossible. Many of the plots stand empty, and Johnson and Trufant Salavant say their neighbors have been approached by different entities with lowball buyout offers.

Trufant Salvant, a former Plaquemines Parish councilwoman, bristles at talk of a managed retreat, and said things didn’t have to be this way. She said additional levees, something residents have been advocating for since Katrina, could have prevented much of the flooding. “They neglected building the levees mainly because of who [the flooding] was impacting—it impacted people of color,” she said.

She says she is committed to fighting for Ironton’s recovery because it is inextricably linked with preserving her family’s legacy. “I just can’t see walking away from it because I feel the struggle that my ancestors endured in order to secure property or little, small cracks of property in this community,” she said. “I would never walk away from it.”

Trufant Salvant also worries that the funds it will take to rebuild Ironton will not reach her community. “That’s been the problem for forever,” she said. “Millions was allocated for Katrina. And it basically went into the wrong neighborhoods”––specifically white neighborhoods with minimal damages.

In January, the Biden administration announced $1.7 billion in funds for Louisiana to “build back more resilient from extreme weather events,” including shoring up levee infrastructure in Plaquemines Parish.

Michael Esealuka, a community organizer with the NGO Healthy Gulf, said Louisiana’s $1.6 billion budget surplus, paired with additional federal funds, means that the state can afford to help residents return to Ironton and rebuild. “There is definitely money on the table to support the recovery of coastal communities like Ironton,” she wrote in an email to Nexus Media, “but it’s a matter of getting organized and building the political will to force our officials to do the right thing.”

A coalition of environmental organizations, including Healthy Gulf, has secured a $3 million commitment from the state’s coastal protection agency to elevate homes in Ironton. According to Esealuka, these funds aren’t enough to cover all of Ironton’s recovery costs, “but it’s a good starting point and puts some fire in our belly to start fighting for more.”

Esealuka says now is the time for the public to apply pressure on state and federal officials, as the stakes couldn’t be higher. “There’s that cliche ‘so goes the South, so goes the nation,’” she wrote. “When it comes to the climate crisis, I believe this is true. Ironton’s plight represents what comes next for the rest of us if we do not act.”

This story was made possible by a grant from the Open Society Foundations.