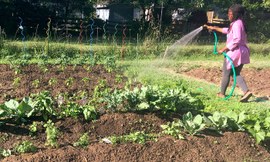 As An African American Woman, I’m Your Most Unlikely Homesteader

On a crisp March 2015 day, in a D.C. suburb, my family and I stood in a fenced-in community garden, nestled behind a church, looking at a grassy, weeded over, 10-foot-by-20-foot rectangular plot, daring us to tame it. The overcast sky hung over us, and our shoes grew damp from the dewy grass. “What are we supposed to do with this?”

This was not what I imagined when I signed up at my friend’s suggestion to join a community garden. I envisioned rich dark soil, in neatly arranged rows, waiting for us to sow vegetable seeds and water them with cute silver watering cans.

But we dug in, and that day marked not just the beginning of my healing, but also the start of my family’s suburban homesteading journey.

Contemporary versions of homesteading have maintained a focus on self-sufficiency, sustainability, and independence. The practice dates back to the Homestead Act of 1862 and today can involve one or more of the following practices: small-scale gardening or animal husbandry, home preservation of food, a focus on conservation of resources, or a general DIY approach to commodities.

It’s a mindset about how you want to live in the world and the values you use to shape those choices. While homesteading is typically associated with rural areas, you can homestead wherever you call home—in the suburbs or in the city.

I am your most unlikely homesteader—an African American woman who has been resisting agriculture most of her life, in part because of the link between agriculture and dirt. I was raised to believe that dirt should be avoided. Cleanliness made you respectable; dirtiness did not.

Yet, the universe kept trying to make a farmer out of me. In 1997, the Biological and Agricultural Systems Engineering program at Florida A&M University offered me a scholarship. Then in 2001, I joined the Peace Corps. I was selected for an agroforestry program in Cameroon. Shortly after my training, I promptly abandoned my agricultural activities in favor of a girls’ empowerment project.

Garden tool in hand, Tiayon prepares to plant new vegetables in her family garden. Photo from Shanna B. Tiayon.

My earlier aversion to agriculture is not uncommon. Black people’s relationship with the land has a complex history. While the connection between slavery and agriculture is what’s talked about most today, after slavery, Blacks did try to reshape their relationship with agriculture. During Reconstruction, a majority of Black people continued to farm. But many found themselves in exploitive sharecropping arrangements.

In 1920, 925,708 Black farmers were in the U.S. However, the increased mechanization of farming combined with discrimination, this time from USDA agencies, continued to make farming while Black increasingly difficult. By 2012, only 44,629 Black farmers were left, representing 1.4 percent of all U.S. farmers.

Blacks had been forced off the land, and here I was returning to it.

By the time I stuck the shovel into that weedy community garden in the spring of 2015, I was finishing up the fourth year of my doctoral program in sociology at the University of Maryland. I was in my early 30s, married with three kids. Juggling my academic, professional, and personal life was taking a toll. I felt physically and mentally exhausted.

Tiayon family members look over an untamed patch of land they eventually concerted into a family garden. Photo from Shanna B. Tiayon.

Around this time, a friend suggested joining a community garden. For someone who had been resisting the soil her whole life, I found myself, at this low point in my life, drawn to the idea of community gardening. I felt like I needed to try something radical. If insanity is doing things the same way and expecting a different outcome, I figured this was certain to shake things up.

To transform our intractable plot into the garden of my vision, my family and I worked tirelessly to remove stubborn weeds, add organic matter to enrich the soil and build high mounds for cultivating—similar to the ones I’d seen in Cameroon.

The garden was literally healing me. The low to mild depression I had been cycling in and out of started to break, and I felt lighter, happier, and more self-accepting. I felt more relaxed. These positive feelings allowed me to release myself from the prison of my own expectations and cut the cord to things I was continuing to invest in that no longer brought me joy.

Science confirms what I was feeling. Research shows a link between coming in contact with microbiomes in the soil and increased levels of serotonin, the feel-good neurotransmitter. The same soil that makes gardening possible can lower our stress and depression.

Inspired, my husband, children and I added another community plot and built several at our residence. Combined, we cultivate about 700 square feet of land where we grow a mix of fully organic warm and cool weather vegetables and some fruits from April to December—ginger, corn, okra, herbs, kale, sweet potatoes and white potatoes, strawberries, along with other varieties. We preserve food from our garden using dehydration, canning and vacuum-sealing.

The vegetable garden. Photo by Shanna B. Tiayon.

Our involvement with the garden inspired us to want to live more sustainably. Over the course of the next several years, we made incremental changes to our lifestyle. Influenced by the book Zero Waste Home, we decreased the amount of waste we produced. We began making our own cloth napkins and rejected plastic grocery bags in favor of reusable ones. To conserve water, we started collecting shower water while it warmed to recycle for other purposes. Eventually, we even started making our own cleaning products. We transformed food and yard waste into compost, which helped to improve our soil.

At first glance, our life looks like anybody else’s. We live in a middle class neighborhood complete with an HOA. After closer inspection, you may notice little things that differ about our lives, like the flowerbed in our front yard that contains broccoli and sweet pepper plants instead of mums. Or the massive collection of coffee grounds in our garage to add nitrogen and organic matter to the soil.

The first harvest. Photo by Shanna B. Tiayon.

This summer we started to share our suburban homesteading journey on Instagram, @black_suburban_homestead, to increase the racial diversity of the public homesteading space and hopefully inspire others to start their own. Excited to connect with other homesteaders, I did a quick search. Of the more than 500,000 pages it returned, only a handful included people who looked like me. Black homesteaders, like Black farmers, are rare, too.

Black people didn’t just leave the land because of the atrocities of slavery. They were forced out. What remained in the Black psyche was a disconnection, the idea that dirt was bad and not respectable. My ancestors fought to stay on the land, and I spent most of my life fighting not to return to it. But once I stopped resisting, a new world opened up for me.