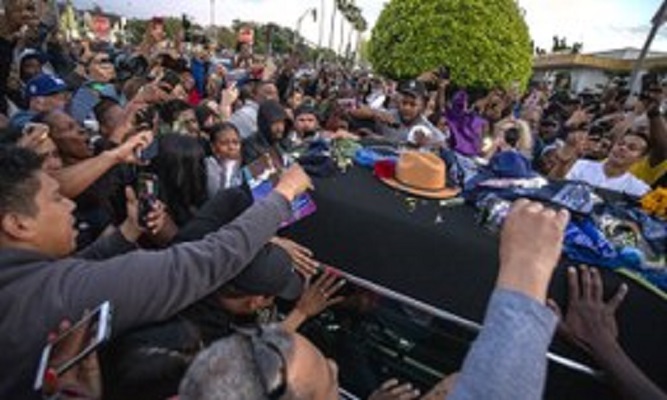 Black Funerals Are a Radical Testament to Blackness

The funerals—or homegoing celebrations, as they’re called in many Black communities—of Aretha Franklin and hip-hop artist Nipsey Hussle garnered millions of views from people across the globe on live television and viral online videos. They gave the world a glimpse of a tradition and ritual that until recently has mostly been witnessed from within African American communities.

Whether held at a small storefront church or one that seats thousands, as in Franklin’s, or at a stadium, as in Hussle’s, some things are constant: On display are flower-filled altars as the backdrop of the neatly casketed loved one, tear-jerking slideshows, the belting of Negro spirituals, odes to ancestors, sometimes West African drumming, liturgical dance selections and emotional reflections—often exceeding the 2-minute time limit.

Black funerals are hands down the Blackest environment known to Black folks, where raw forms of Blackness are exercised—aesthetic, void of dress code, just “come as you are,” suited and booted, with colorful, elaborate hats, or oversized T-shirts honoring the deceased; celebration, gospel, grief, rage, repentance, the organ and its sonorous chords melded with guttural chords of the vocalist—it all goes down. For African Americans, the homegoing is the ultimate form of liberation. It is one of few Black spaces that has not been permeated with whiteness.

Although, that was not always the case.

In her book To Serve the Living: Funeral Directors and the African American Way of Death Suzanne E. Smith writes that during the antebellum period, enslaved Africans were prohibited from performing funerals, much less practicing traditions that memorialized the dead.

This disallowance was in part because of the opportunities thought to be present when the enslaved gathered in numbers—that they’d escape captivity or plan a rebellion. It is also safe to assume that enslavers simply lacked empathy and denied their “property” any sense of humanity. And if a slave owner felt benevolent toward enslaved mourners, funeral services were granted, albeit under supervision of an overseer or the enslaver himself. Such measures called for those enslaved to carry out funeral ceremonies in “hush harbors,” which were covert places where African religious practices were fused with Christianity—of course, unbeknownst to enslavers.

And as funeralizing morphed into a viable profession in the Black community, Black embalmers, funeral directors, and morticians were shut out from the National Funeral Directors Association, moving them to form their own National Funeral Directors & Morticians Association. This led to African Americans being able to undertake and practice funeral services in our own way. Black funerals as we know them today emerged from those duties. Further segregation during Jim Crow and redlining helped them to thrive.

Once having been forced to abandon their ancestors’ traditions, Black people in America have revisited them.

Black funerals have thrived and continue to be void of whiteness. Perhaps that is why they thrive.

Homegoings are where Black folks perform Blackness with whole and unfettered reverence. Benevolence and group economics are often at play because life insurance isn’t always part of the deal. Never mind the memorial Olympics—who bought the largest floral arrangement, or spoke the longest, cried the loudest, threw themselves at the casket. For each articulates love and loss in their own way wrapped in the finest African American vernacular. There’s no sight to see quite like witnessing estranged family members who fell out of fellowship unify out of respect for the decedent.

At Black services, blind rage may speak its truth to a room of sympathizers without the threat of dismissal, erasure, or harm. Black grief is tended by gingerly hands and hugs absent of hegemonic stereotypes and social pressures that demand strong womanness and hypermasculinity. Black funerals are a testament of rhythm and blues that fill chapels, soul that pours from organs, intonation wrapped around eulogies, final farewells at the close of the casket, and jubilance of breaking bread and celebrating Black life at the repast.

The Black funeral is a mood. It is radical Blackness and love at face value without the interruption of whiteness.