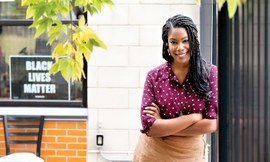 A national network of financial cooperatives is helping marginalized groups keep their money out of an extractive banking system.

Me’Lea Connelly is from the Bay Area of California, but she has deep roots in Minnesota. Her mother’s family was one of the first to migrate to the state after slavery ended. When she was 15, her parents divorced, and she moved with her mother to Minneapolis.

But that home, in Minneapolis’ Northside, has a severe shortage of shopping centers, grocery stores, and banks. In 2017, Minnesota was named the second-most unequal state for Black people in a study of Black and White inequality by 24/7 Wall St., a financial news and opinion website.

Despite the strong sense of community that comes with a long history, the African American families of Minneapolis’ Near North and Camden neighborhoods weren’t thriving. As an activist against racial economic injustice, Connelly understood that she was witnessing how systemic oppression strips wealth and prevents generational wealth accumulation.

Regardless of previous attempts by outsiders to invest in the Northside, Connelly and others realized that no one from outside the Northside was going to help their community revive itself and thrive into the future.

“There’ve been a lot of big promises made by philanthropy to folks on the Northside, and very, very few—if any—have come to fruition,” Connelly said.

She knew—as did many others in the Northside—that power lies in who controls the money. “How do we take control of our own community and not let the lack of financial services in our community dictate our future? We have to have our own,” Connelly said.

Connelly had previously started Blexit, a grassroots nonprofit that organizes boycotts of financial systems that have historically extracted wealth from Black communities and increases support for the Black-owned economy. And, in 2017, she developed the idea for Village Financial Cooperative, a Black-owned credit union. Connelly intends to find people with more financial experience to run it once it receives its charter, which she hopes happens by 2019.

Connelly’s credit union is part of a strategy by a nonprofit consortium of investors, financial organizations, and community development groups known as the Financial Cooperative to set up locally controlled loan funds across the country.

The cooperative’s founders believe investing and lending in marginalized communities can counteract historical wealth extraction, which happened in a number of interconnected ways, including removal of natural resources, discriminatory housing and banking practices, underinvestment in physical infrastructure, and a lack of well-­paying, sustainable jobs.

The Financial Cooperative calls its task “nonextractive” or “regenerative finance.” The goal is to give control of capital to communities that have been most marginalized, but also to funnel capital into those communities.

“We live in a world where the surplus of human labor is accumulated by individuals for the purpose of increasing their own level of luxury, privilege, and power.”

It believes in cooperative control of community financial institutions and set itself up as a cooperative nonprofit, with each participating community getting a say in how the whole operates. The founding members of the cooperative are longtime leaders in the movement with years of experience in all areas of “impact” investment and cooperative finance: The Working World, the Southern Reparations Loan Fund, the Climate Justice Alliance, and the Baltimore Roundtable for Economic Democracy are all founding member organizations.

Ed Whitfield, co-managing director of the Fund for Democratic Communities in Greensboro, North Carolina, was one of the co-founders of the Financial Cooperative. He says our current financial system isn’t set up to meet the needs of community.

“Currently, we live in a world where the surplus of human labor is accumulated by individuals for the purpose of increasing their own level of luxury, privilege, and power,” Whitfield said. “It comes from an accumulation that knows no limits and sees no end.”

There are now 23 member financial institutions actively lending or in development around the country. Most are in urban centers—such as the Detroit Community Wealth Fund, the Boston Ujima Project, and Cooperation Richmond in California. Some newer members are in smaller cities or rural regions, such as the Cincinnati Union Co-op Initiative and Cooperation Central Appalachia Inc. in Charleston, West Virginia.

The Financial Cooperative now has $7 million available for lending, and hopes to raise $20 million within the next five years. It’s set up as a revolving loan fund—a self-­replenishing pool of money that uses interest and principal payments on old loans to issue new loans.

Brendan Martin is the founder and president of the Working World, a nonprofit investment firm solely devoted to countering traditional “extractive finance” by funding cooperatives. His New York-based organization pools investor money from around the world to incubate worker cooperatives, providing loans that don’t require collateral or go into repayment until the co-op makes a profit.

The Financial Cooperative was Martin’s initial creation. The co-op seeks out capital from people who want to see their investments have a big impact while also carrying a relatively low risk.

“[The Financial Cooperative] is infrastructure on behalf of the borrower, and the borrower is the rest of us; it’s not the 1 percent of the world who are capitalists,” Martin said. “It’s so radical, but also it’s just really obvious.”

Most of the money raised so far has come from funding sources that are more politically aligned with the Financial Cooperative’s vision, Martin said. But the hope is that the organization will grow large enough in the future to absorb funding from less aligned sources, perhaps from more extractive sources that have interests in fossil fuels or multimillion-dollar businesses, for instance.

“It’s really not been on my mind to think about the investors as aligned versus nonaligned, or extractive versus nonextractive,” said Marnie Thompson, project officer with the Southern Reparations Loan Fund. Thompson also serves on the Financial Cooperative’s investment committee. “It’s been on my mind to take money that’s been generated through human labor and put it to work building a more democratic, just, and sustainable economy that is owned and controlled by the communities that have been most excluded and extracted from.”

“I think our project has given people something to opt into that’s hopeful and that has a real, tangible outcome connected to it.”

“Minnesota is one of the most amazing places to live if you’re not Black,” Connelly said. She was among the activists and organizers who were outraged by the recent police killings of Jamar Clark and Philando Castile. After she formed Blexit, she saw the need for community meetings to discuss what actions residents wanted to take to improve the Northside’s future.

Almost 200 people showed up to a community meeting after Castile was killed. That’s where the idea of establishing a Black-led financial institution in the Northside came to the fore.

“Here are folks who are mourning the death of another Black man killed by police, who are absolutely emotional, but they have the clarity of mind to say the crux of all of this is financial advocacy and institutional ownership,” Connelly said.

That’s when Village Financial was born. About 1,300 community members have pledged to put their money into the credit union once it’s established. A typical community-driven credit union raises just 600 members.

“I think our project has given people something to opt into that’s hopeful and that has a real, tangible outcome connected to it,” Connelly said.

Connelly recently helped one of her clients get what Village Financial calls a “New Day Loan,” an alternative to payday loans, which target marginalized communities across the country. New Day Loans provide options for people struggling to pay off payday loan debt. The hope is that through the Financial Cooperative, others can learn from Village Financial’s example and potentially establish similar solutions in their communities.

Connelly’s client is a county employee who had been using a Walmart cash card as her financial institution because she had no credit or bank account. Every time she used this card, she was charged a fee. After 12 years, those fees amounted to $24,000.

“I don’t need to have 20 years of financial experience to know that this is crazy and to do something about it,” Connelly said.

Providing financial services is an emerging role for what the Financial Cooperative calls its “peer members,” most of whom got involved to make loans to people starting worker-owned cooperative businesses.

But Connelly said improving financial literacy and providing people with an avenue to establish healthier and more stable financial lives are crucial before any kind of worker-cooperative development can happen.

“We can’t develop worker co-ops if people can’t make it paycheck to paycheck,” Connelly said. “We have to start where people are at.”