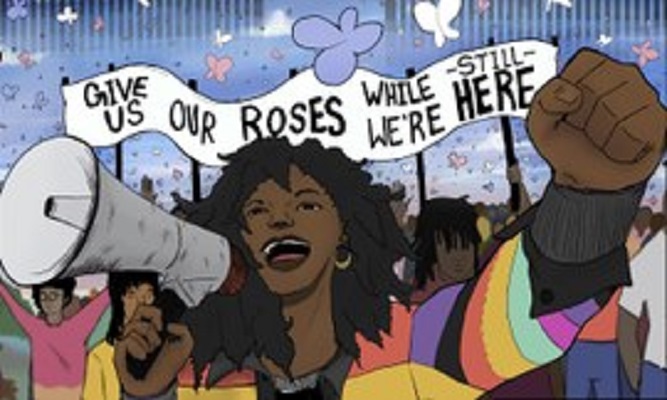 Black Trans Women Are Being Killed. Could Paying Them Help Stop This?

One of the more under reported trends in the LGBTQ community is the high rate at which trans people, especially Black trans women, are murdered. In 2018, 26 trans people were killed, most of them people of color. And at least 20 trans or gender nonconforming women of color have been murdered in the United States as of November 2019 alone.

Those numbers do not account for unreported and misreported murders, or trans people who have unexpectedly died under suspicious circumstances, but whose deaths have not been determined to be homicide.

While the number of individual deaths is low, Mic’s “Unerased: Counting Transgender Lives” project in 2016 estimated that, while the overall murder rate for the U.S. was 1 in 19,000 per year, the murder rate for Black trans women was 1 in 2,600, more than seven times as high as that of the general population.

Many institutional factors are at play in this trend, and while there is no clear solution to ending the violence, some activists argue for direct financial support of trans women of color—paying them.

“Even small bits of economic security can help keep us away from unsafe situations,” Renee Jarreau says. Jarreau is a Seattle-based musician, DJ, and producer who runs a Twitter account called “Pay Black Trans Women” (@PayBlkTrnsWomen) and uses this platform to amplify disparate calls for financial support.

Trans people are a demographic highly at risk of being victims of violence and discrimination. The Human Rights Campaign has estimated that trans women are 4.3 times more likely to become homicide victims than all women, and the vast majority of the victims are Black. Trans people often are denied work or fired when they come out as trans, present as their true gender, ask to be called by a different name or pronouns, or when their employers otherwise find out their gender identity. For this reason, many trans women turn to the dangerous underground economy of sex work because it has historically been a place where trans women have been able to make a living and even found acceptance in a community of peers.

But the financial burdens they face are considerable: common health care practices for trans people, such as hormone replacement therapy and gender-affirming surgery, are also costly. According to the American Journal of Psychiatry, undergoing gender-affirming surgery often leads to long term mental health benefits, but the procedure can cost up to $75,000, according to the Human Rights Campaign. And when being passing as a cisgender woman can mean the difference between life and death, many trans women are left with little choice but to try to find the money anyway they can.

Take the example of Ashanti Carmon: Her trans identity was rejected by her family, and she was kicked out at the age of 16. Houseless and desperate, she had little choice but to engage in sex work. Eventually she found work outside the underground economy and engaged in sex work less often. She got engaged to her boyfriend and had found a community outside of her blood family. However, she and her fiancé still struggled to find an apartment they could afford. At age 27, Carmon was found shot dead on a street in Fairmount Heights, Maryland, known to be a gathering place for sex workers and trans women.

When a trans person dies, the police reports of their deaths often are inaccurate, listing the individual’s “deadname,” the name the individual stopped using once they came out as trans, or misgendering them or using incorrect pronouns. This makes it more difficult for communities to be informed of a trans woman’s death, and also for groups such as the Human Rights Campaign to get accurate data on deaths.

“Having that [financial] security so we’re not worried about what’s going to happen at every moment of our lives gives us the opportunity to do other things that either helps us to sustain ourselves more or organize to help combat some of the issues we face,” she says. Financial support means trans women of color can support themselves in fighting the violence they are subjected to.

“A lot of the legal progress is becoming undone, and a lot of that legal progress has never protected us anyway. The system, the courts, the police, they don’t support us. They often use their powers against us even when the letter of the law says otherwise,” Jarreau says.

However, the ultimate goal isn’t money, but the security that money can help provide. “Don’t just give money to Black trans women,” Jarreau says. “Give us jobs, support our work. Support us if we’re artists, if we have businesses, if we have regular jobs. Check on us if we say we’re not doing well. Provide emotional and mental support. Provide in any way you can. Listen to the things we’re saying and center our words especially when we’re talking about issues directly related to us. Amplify our voices. It goes deeper than just money and economic security.”

Formed in 2018, The Trans Women of Color Solidarity Network is a Seattle-based organization that collects money from the community through its Patreon page and redistributes it to trans women, two-spirit and femmes of color in need. The group distributes up to $250 per person per month with no strings attached.

“Trans women and femmes of color are still fighting for the right to live,” says Lourdez Velasco, a founding member of the volunteer-run network. “We haven’t seen something modeled in this way specifically for trans women of color.” It all started when one of the group’s founding members was planning for gender-affirming surgery. The operation ended up being covered by their insurance, and so they decided that they would use the fundraiser they’d planned to instead support the larger community.

The fund is not where the team’s work ends, however. Looking to the future, Velasco says, “we’re hoping to build a housing solidarity network.” Access to housing and safe places to stay is another large concern in the trans community, specifically when it comes to trans women of color.

Devin Lowe launched the Black Trans Travel Fund in June 2019 to provide Black trans women with funding to pay for safer ride-share services through Lyft or Uber. The group  operates in the New York City metropolitan area, including New Jersey, but Lowe hopes to expand to a larger reach. “I would like to expand to more high-risk areas, places like [Washington,] D.C., Baltimore, Dallas. Places where there have been lots of encounters of violence against Black trans women,” Lowe says. “No one is free until Black trans women are free and safe.”

“Trans women and fem-mes of color are still fighting for the right to live.”

Lowe started the project after becoming frustrated with the lack of response to the killings of Black trans women across the country. He says he was inspired by his partner, who is a Black trans woman. “Very often, she spoke about issues regarding harassment every day while walking down the street, trying to use public transportation, and issues with men on the train,” he says, adding that many of his friends and other people in his community who are Black trans women have expressed similar sentiments.

United Territories of Pacific Islanders Alliance, or UTOPIA Seattle, is an organization that serves queer and trans Pacific Islanders (or QTPIs, pronounced “cutie pies”). Taffy Johnson, the organization’s executive director, describes the organization as, “a trans and fa’afafine-led member-based organization,” explaining that, “Fa’afafine is a cultural gender identity native to Samoa, which translates [as] ‘in a journey between masculinity and femininity.’” The organization has many programs to support QTPIs and many of them are tailored to trans women, including a sex worker support group, HIV prevention/screening resources, employment education, workers rights workshops, tenant housing rights workshops, and a program called Mapu Maia, which supports trans people with name changes, health insurance, and obtaining access to trans-affirming health care such as hormone therapy.

Johnson says that legal obstacles that the trans community faces are compounded by the way society treats trans people. “Our undocumented siblings, they could face incarceration and possibility deportation,” she says. A 2018 Washington state law passed ostensibly to target sex trafficking in reality has made sex work more dangerous by making it more difficult to screen possible clients. In addition, an arrest could affect a trans woman’s ability to find housing and employment, and if they seek shelter in temporary housing, they will face additional structural barriers and discrimination.

Donato Fatuesi, UTOPIA’s operations manager, says that trans women of color are at risk for violence for many reasons, not just in sex work.

“There are often times that trans women of color, especially Black trans women, face violence, and in a lot of cases that violence is bred through toxic masculinity and it also comes from their partners,” she says. “Sometimes it can be hard to navigate safe spaces in order to be able to receive resources, especially when that violence is coming from somewhere close.”

Violence towards trans women often occurs when cis male partners feel that their masculinity is threatened, Fatuesi says. “We really need to have pressing conversations around toxic masculinity that continues to stigmatize trans women.”

While paying trans women of color will not put an end to systemic transmisogyny or racism, advocates of the practice say it can be a step in the right direction toward more equity and safety. “It’s not going to alleviate the trauma of discrimination, criminalization, personal and state violence that trans women of color face,” Velasco says. “It is one radical way in which we can resist all types of oppression and violence. … There’s going to be so many ways collectively that we can create community and collective care.”