Strike is about more than pay; teachers demand counsellors for every school to help students deal with daily trauma.

Chicago, Illinois – Chicago Public School social worker Cathy Mizicko hasn’t had a “normal day” in her 17 years at Jordan Elementary Community School in Rogers Park, a school on the far north side of the city.

“Our school has a high poverty level, and it’s very diverse … There will be a shooting near one of the student’s apartments, so they come in having to deal with that,” she told Al Jazeera.

Mizicko is one of the more than 30,000 educators, social workers, counsellors and support staff who have been on strike for nine consecutive days over pay, working conditions and resources, including access to trauma care in every public school.

Many public schools in the US’s third-largest district do not have a full-time counsellor on site, as mental health staff travel from school to school throughout the week to handle hundreds of cases.

Mizicko considers herself lucky, however. The city identified Jordan Elementary as a priority school to dedicate more resources to two years ago. The school has 430 students, with a full-time counsellor and social worker on site.

“I almost feel guilty that we have the support right now that the students need, and that it’s making a difference,” she said. “The reality is that most of the schools, and the high-need schools, don’t have that social worker to help support all the students.”

There were 561 homicides in Chicago in 2018. That number is down from 660 in 2017 and 777 in 2016, a sign of progress, but for many children in the city, especially in the most vulnerable areas, the high levels of violence mean trauma has become part of their daily lives.

One student counsellor who wished to remain anonymous said it is difficult for children dealing with such trauma to manage classroom work without any kind of help.

The counsellor has worked for Chicago Public Schools (CPS) for 20 years, first as a teacher and then, for the past 12 years as a counsellor at a school in the city’s south side, a neighbourhood where gun violence is often a daily reality.

“I have students who have had family members killed or shot over the years, and I have lost students due to the trauma and the violence in the City of Chicago,” she said at a rally in front of City Hall this week.

“If someone just got shot over the weekend, or you’re going hungry or you don’t have the appropriate resources in your home, you’re not going to come to school and say ‘Oh, let me listen to this math lesson or this reading lesson.’ You’re not thinking about that. And that’s when the students start acting out in the classroom,” she told Al Jazeera. 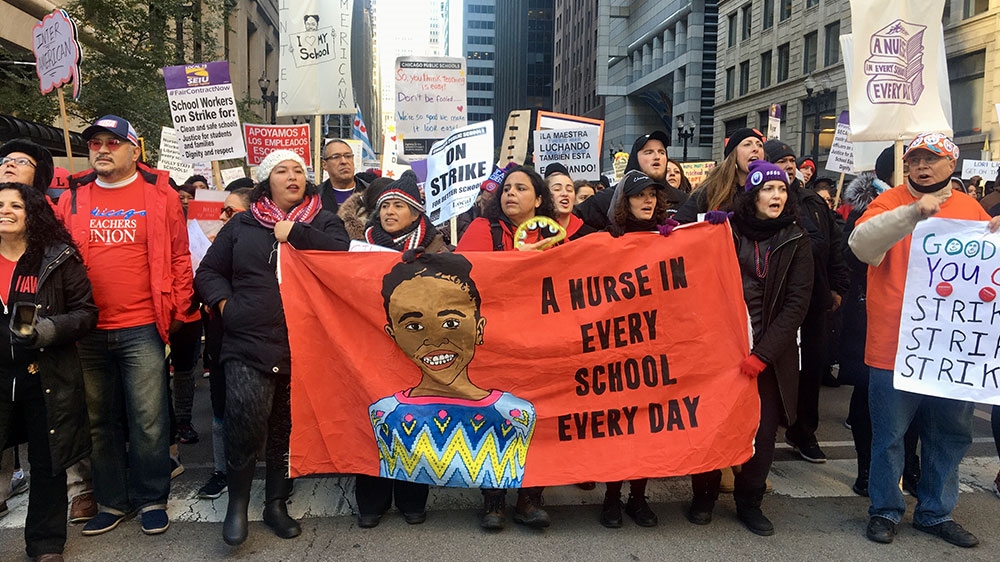 Teachers, counsellors and social workers are picketing for a contract that includes increased trauma care for students [Anne Bouleanu/Al Jazeera]

Educators and support staff would ideally like to see one counsellor and social worker for every 250 students, as recommended by the American School Counsellor Association (ASCA) and the National Association of Social Workers (NASW). In 2018, Chicago’s school district had an average of one counsellor per 444 students, and one social worker per 1,238 students. There are more than 360,000 students in the district.

Without that support, teachers face a significant challenge in creating the healthy classroom environment necessary to help students achieve success.

‘We should be supporting students’

Linette Morales, an instructional support leader who works with 19 CPS schools, helps teachers manage curricula, lesson plans and develop student intervention plans. Morales would like to see more mental and emotional care for children with behavioural problems due to trauma.

“[We need to be] helping kids deal with conflict and helping them overcome those things instead of having punitive consequences,” Morales said at a rally organised by the Chicago Teachers Union (CTU).

“Instead of suspending kids, [we should be] giving them the support to see what the underlying issue is, to see why they are behaving in those manners,” she told Al Jazeera.

For seven days students have been out of school as members of the Chicago Teachers Union (CTU) hit the picket lines over smaller class sizes, a pay increase and care for students in crisis.

They’re in a standoff with the city and Mayor Lori Lightfoot as they inch towards a contract that CPS staff hope will include a focus on trauma care. There are currently about 400 social workers in CPS schools. The Lightfoot administration has proposed doubling that figure over the next four years, while the CTU is pushing for triple during the same time period.

In their final offer to the CTU before educators went on strike, the city offered two million dollars to hire and train new support staff over the course of a five-year contract. CTU President Jesse Sharkey called the offer “a joke” and “insulting” during a news conference the week before the strike, stating that sum would only be enough to pay for two teachers and four social workers, case managers and nurses a year over the life of the deal. 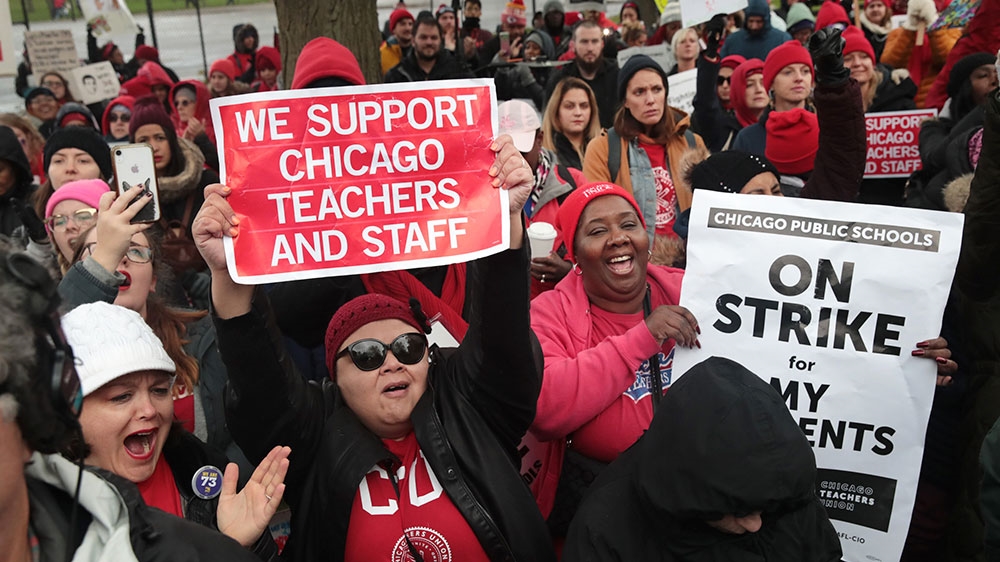 It’s the city’s longest strike since 1987, when CTU educators stopped work for 19 days. The union last went on strike in 2012, when educators picketed for eight days for a new contract. They’ve shifted their focus directly towards trauma care this year.

According to social worker Mizicko, each student has different needs depending on where they live in the city, their home lives, family income level and the challenges unique to each student’s daily life. She and other members of the CTU are on strike to improve their work conditions, she said, which in turn are their students’ learning conditions.

“We need a lot of different things for the schools, including all schools to have the support that they need – the social-emotional support for students … and funding for those services that are important,” she said.

Teachers and counsellors see their roles as intertwined: Improving working conditions will help improve the lives of their students. They hope to help students achieve academic goals and set them up for healthy lives in and out of the classroom.

“A teacher cannot teach in a classroom with 30-something kids where you have 10 or 15 who have dealt with trauma in their life – they cannot focus in the classroom,” the school counsellor said. “We need counsellors in every school.”