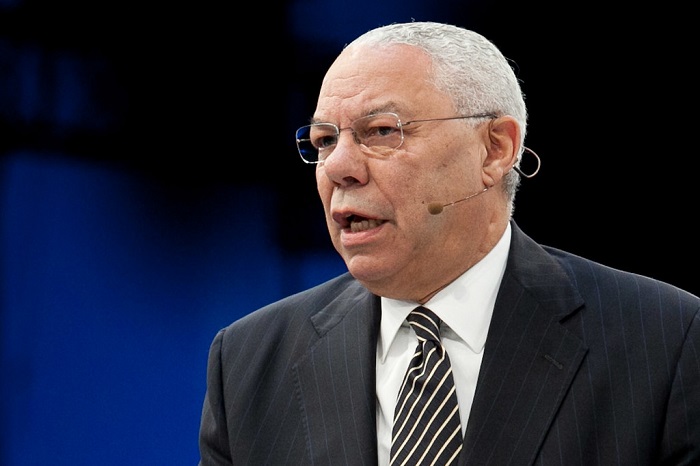 Colin Powell – As A Patriot And Black Man, He Embodied The ‘Two-Ness’ Of The African American Experience

Colin Powell knew where he fit in American history.

But his “American journey” – as he described it in the title of a 2003 autobiography – is more than the story of one man. His death is a moment to think about the history of Black American men and women in the military and the place of African Americans in government.

But more profoundly, it also speaks to what it means to be an American, and the tensions that Colin Powell – as a patriot and a Black man – faced throughout his life and career.

I’m a scholar of African American studies who is currently writing a book on the great civil rights intellectual W.E.B. DuBois. When I heard of Powell’s passing, I was immediately reminded of what DuBois referred to as the “double-consciousness” of the African American experience.

As DuBois put it in an 1897 article and later in his classic 1903 book “The Souls of Black Folk,” this “peculiar sensation” is unique to African Americans: “One feels his two-ness – an American, a Negro; two souls, two thoughts, two unreconciled strivings; two warring ideals in one dark body, whose dogged strength alone keeps it from being torn asunder.”

This concept profoundly describes Colin Powell as a soldier, a career military man and a politician.

What it means to serve

On the surface, Colin Powell’s life would seem to refute DuBois’ formulation. He stood as someone that many people could point to as an example of how it is possible to be both Black and a full American, something DuBois viewed as an enduring tension. There is a narrative that Powell used the military to transcend race and become one of the most powerful men in the country. In that sense, he was the ultimate American success story.

But there is a danger to that narrative. Colin Powell’s story was exceptional, but he was no avatar of a color-blind, post-racial America.

The U.S. Army has long been seen as a route for Black Americans, especially young Black men, out of poverty. Many chose to turn their service into a career.

By the time Powell, the Bronx-raised son of Jamaican immigrants, joined the U.S. Army, there was already a proud history of African Americans in the U.S. military – from the “Buffalo Soldiers” who served in the American West, the Caribbean and South Pacific after the U.S. Civil War to the Tuskegee Airmen of World War II.

Powell was part of that military history. He joined in 1958, a decade after desegregation of the Armed Forces in 1948.

But the military was – and still is – an institution characterized by structural racism. That was true when Powell joined the Army, and it is true today.

As such, Powell would have had to wrestle with his blackness and what it meant in the military: What did it mean to serve a country that doesn’t serve you?

As a military man during the Vietnam War, Powell also stood apart from many Black political leaders who condemned U.S. action in Southeast Asia.

While Muhammad Ali was asking why he should “put on a uniform and go 10,000 miles from home and drop bombs and bullets on Brown people” at a time when “so-called Negro people in Louisville are treated like dogs and denied simple human rights,” Powell was making his way up the military ranks.

It helps explain why despite Powell’s undoubted achievements, his legacy as a Black leader is complicated. His identity – being of Jamaican heritage – posed questions about what it means to be an African American. His life in the military prompted some to ask why he would serve a country that has historically been hostile to nonwhite people in the U.S. and around the world. The veteran activist and singer Harry Belafonte likened Powell in 2002 to a “house slave” in one particularly contentious remark questioning his loyalty to the U.S. system.

Powell acknowledged the realities of racism in the U.S., while at the same time believed it should never serve as an obstacle nor cause Black people to question their American-ness. In a May 14, 1994 commencement speech at Howard University, Powell told graduates to take pride in their Black heritage, but to use it as “a foundation stone we can build on, and not a place to withdraw into.”

And then there are his political affiliations. He was Ronald Reagan’s national security advisor and George H. W. Bush’s chairman of the joint chiefs of staff at a time when the domestic policies of both presidents were devastating Black America, through mass incarceration of Black men and women and economic policies that stripped services in lower-income areas.

That was before one of the most consequential and controversial moments in Powell’s political life.

In February 2003, Powell argued before the United Nations Security Council for military action against Iraq – a speech that erroneously claimed that Saddam Hussein had stockpiled weapons of mass destruction. He hadn’t, and the war that Powell helped steer the U.S. into scars his legacy.

Powell’s two-ness, to use the DuBois phrase, manifested later in his decision in 2008 to endorse Barack Obama as presidential candidate over his fellow Republican and military man, John McCain.

In Obama, Powell saw “a transformational figure” in America and on the world stage.

In endorsing Obama, Powell chose the historic significance of the U.S. having its first Black president over loyalty and service to his friend and political party.

His drift from Republicanism furthered after Donald Trump seized the reins of the party. He became increasingly vocal in opposing Trump, who saw Powell – as did many of Trump’s supporters – as something of a traitor.

That view ignores the history.

Powell was a patriot who embodied DuBois’ “two warring ideals in one dark body.” For Powell to have reached the heights he did required dogged strength and perhaps far greater effort to hold it together than his white predecessors.

In America, being Black and a patriot is – as DuBois hinted at more an a century ago, and as Powell’s life attests to – a very complicated, even painful, affair.