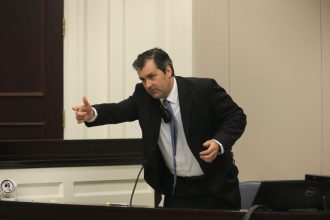 Cop Finally Gets His Due, Walter Scott’s Killer Sentenced To Prison

In America, we have been having a conversation about police brutality against black Americans. Despite the countless black people murdered unjustly by police, there is usually no justice. Sandra Bland, Philando Castile, Keith Lamont Scott, Michael Brown, Freddie Gray…too many to mention here, really. All of those people were senselessly murdered by cops who chose to be their judges, juries, and executioners, and they did so with impunity and without consequence. However, there is hope, and it is coming out of South Carolina, of all places.

North Charleston police officer Michael Slager murdered Walter Scott, a black man who was fleeing after a routine traffic stop in cold blood in 2015. He would have gotten away with it, too, had it not been for a citizen who was brave enough to tape the murder. The tape showed that Slager had lied about his life being in danger, and it showed him cuffing Scott’s lifeless body, and then planting a taser as “evidence.” Here is the news report of that damning tape:

Thanks to that tape, Slager was arrested and charged with murder. Now, fast forward two years later, and Slager has been convicted of murder. U.S. District Judge David Norton decided to throw the book at Slager, and sentenced the murdering ex-cop to 19-24 years in prison.The original case ended in a mistrial, but the state of South Carolina seemed determined to get justice for Walter Scott, and that happened on December 7, 2017.  Of course, Slager’s family begged for mercy from the judge, but luckily those calls were ignored. Michael Slager is a murderer, and he deserves the sentence he got.

So many times, these cases end with the murderous cops back on the force, out in the streets after what amounts to nothing more than a paid vacation, free to murder another black person at will again. Thankfully, for once, the system worked as it should. For once, I am proud to be a South Carolinian. Hopefully this sets a precedent, and helps us turn a corner toward the arc of justice.

Watch the video of the remarks of the Scott family below: