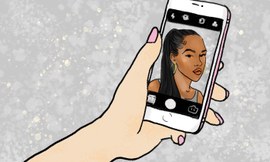 Dear White Women, Try On Our Struggle Instead of Our Looks

Emma Hallberg, an Instagram model, says she identifies as White and never claimed to be anything other than, so no we don’t have another Rachel Dolezal here.

But Black and Brown women took to social media with their disapproval. Some called it “blackface” and “cultural appropriation.”

Turns out the young Swede is not the only White woman “blackfishing.” That is overly tanning themselves or literally spray-painting their bodies darker, in some cases wearing traditionally Black hairstyles and appearing to have augmented their bodies (lips, butt) to resemble that of Black and Brown women, and posting their photos on Instagram.

Although I understood the upset and offense felt by many, I initially didn’t find the issue problematic.

After all, throughout history, women of all different backgrounds, ethnicities, cultures—including White women (they’re not all naturally blond with angular noses)—have decorated and manipulated their bodies to conform to societal standards of beauty. In some African and Asian countries, women painted their bodies, they mutilated their bodies through scarification, piercings, foot-binding.

So, having studied the impact of Eurocentric standards of beauty in both undergrad and grad school, I guess I chose to view the issue through a lens of shifting the narrative on beauty standards.

For centuries, Black women and other women of color have been bleaching their skin, or straightening their hair or coloring it blond, or getting nose, lip, and eye jobs, because we’d been taught that light skin, straight hair, angular noses and thin lips and bodies are beautiful, and that our naturally dark skin, broad noses, and coarse, curly, or kinky hair is not.

There was a saying I grew up hearing that derived from a song about the Jim Crow system, “If you’re Black, get back. If you’re Red, you’re dead. If you’re Brown, stick around. If you’re Yellow, you’re mellow. If you’re White, you’re all right.”

The impact of race classification has been and continues to be detrimental to us all.

But over decades there have been cultural empowerment movements proclaiming that “Black is beautiful”—our Brown skin in all shades, 2A to 4C hair types, big noses, lips, and butts, etc.

Traditional and social media platforms have shifted to acknowledge this beauty. More Black women are featured on the covers of beauty magazines. Blogs like For Harriet, Madame Noire, Happy Black Woman, and new lifestyle magazines continue to pop up sharing stories that exemplify this beauty and normalize Blackness.

Imitation is the best form of flattery. So what then is the problem when White women imitate our culture?

There are several. But I’ll start with these.

The difference between the “Black is beautiful” message and the “White is the standard of beauty” message is that White beauty is not being devalued.

Also, this isn’t just cosplay for some of these women, Hallberg in particular. They’re profiting from their new look in ways that Black or other women of color are not.

One Instagram model who is mixed-race and identifies as Black says what these women are doing takes away from actual Black creators on the site.

“They’re getting sent natural hair products aimed at Black people,” Annie Nova says. “When companies [do this] an actual Black influencer has lost out on work.”

And although Black women have struggled to have their beauty recognized, Blackness is more than an aesthetic. Race classification and racism have made it so that in whiteness there is—or at least the appearance of—freedom and liberation.

In Blackness, there is oppression and the struggle for freedom and liberation.

So when White women “try on” Blackness they’re only admiring what is the “exotic” for the moment. An accessory they can take off.

In other words, non-Black people like Black culture, but not Black people.

The ultimate form of flattery would then be for White girls to not change at all their outward appearance—that is for the sake of “looking Black,” but to change on the inside.

I came across a quote by Essence senior editor Kirsten West Savali, recently, that says, “We, as in Black women, know that [W]hite women have proved over and over again that their [W]hiteness—their access to power, wealth, and intentionally constructed institutional blamelessness—is more valuable to them than their womanhood.”

I want to challenge White women, even the Hallbergs of the world, to try on our struggle, our sorrows, our resistance.

That look, I imagine, would be longer lasting, more fulfilling, and more beneficial to us all.