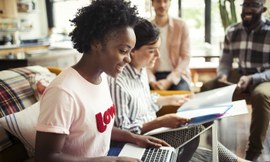 As part of a collaborative social justice reporting project three years ago, a group of journalism students set out for Selma, Alabama, to cover sociopolitical issues there, 50 years after Bloody Sunday, a pinnacle in the civil rights movement.

The 12 students, six from Morgan State University, a Historically Black College and University in Baltimore, and six from West Virginia University, a predominantly White institution in rural Morgantown, were partnered across schools as workmates and roommates.

They participated in an experimental classroom known as Story Bridge, launched in 2015 to help future journalists see issues through different lenses.

The Bridging Selma assignment took a notable turn for one of the teams when the Morgan State student interviewed mostly Black people, while her WVU partner, the photographer shooting accompanying video, captured only White people.

“So they come back and they’re sitting down to edit the piece and our student looks at him and says, ‘You didn’t get any Black people,’ recalls Jacqueline Jones, assistant dean of programs for the School of Global Journalism and Communication at Morgan State. “And he says, ‘You don’t have any White people.’”

Neither had deliberately left out people from the other race, but both had simply covered what felt natural to them, Jones said.

Hence the purpose of Story Bridge.

Funded by the Knight Foundation, the project seeks to explore benefits of emerging technology for crossing racial, class, and gender divides in news reporting and documentary filmmaking.

It began by first bringing students and faculty members from the two universities together for the Selma trip. The idea was to have the students report on what had transpired in the city over the previous 50 years. It was the first time some of them had interacted so closely with someone of a different race.

“We want to teach young journalists to do social justice reporting and to look at the intersections of race, of class, of gender, of disability.”

What the students weren’t prepared for, she says, was learning they would be partnered with a student from the other school, and would have to work and room with that student.

This, after all, was an experiment in collaboration, not competition.

“We were working as a team just like professionals do,” she says. “And though we come from different backgrounds and different places, we were focused on the work.”

Journalists are taught that objectivity is supposed to be neutral and nonbiased, explains Joel Beeson, associate professor at WVU’s Reed College of Media. “But we’ve seen that often that position masks White supremacy and White privilege because of an assumed audience and professional practices,” Beeson says.

So, Story Bridge students learn to challenge that by applying “counternarrative techniques to their reporting”—basically being intentional about seeing an issue through someone else’s experience or perspective.

As part of their second reporting project, the student journalists reported on food security, where they investigated inequities in food access within each other’s communities. Students from rural West Virginia traveled to Baltimore, and the Baltimore students traveled to West Virginia—what some of them referred to as Trump Town.

In a video, Beeson explains, “What we’re trying to do is disrupt master narratives about food access, food deserts,” and look at them from a different perspective. “We want to teach young journalists to do social-justice reporting and to look at the intersections of race, of class, of gender, of disability.”

In the same video, Synclaire Cruel, a student from Morgan State, says she was nervous to travel to West Virginia.

“The first things we heard [when people learned we were going] was it’s Trump area, it’s Trump nation down there,” Cruel says. “And so, it’s like if they like Trump then they clearly have a certain mindset.”

“I have this White perspective world, and I can try to do as much as I can to learn, but the ultimate thing is really just to listen.”

Each side had to confront stereotypes as well as perceptions about the areas they were covering, Jones says. For example, “Urban kids learned being in the country didn’t give you automatic access to healthy food,” she says. And the rural kids learned that there was self-determination in the city, that fewer resources existed, and that more people are dependent on the government to resolve issues.

But they also learned that “there were community farms where ministers and community activists were working on sustainability projects” to give people options for fresh fruits and vegetables so they wouldn’t always have to depend on the government. “They see people are all over the map on these issues,” Jones says. “And so they learned what you think you know is not always what you know.”

“Going to Selma floored me,” Pelland says. “I had not spent any time in the Deep South, and certainly not talking to people from the South for any extended period of time.” Racism is so ingrained, she said: “In one breath you can say, ‘Well, I’m not racist,’ and then project something that is.”

Pelland said she grew up in a majority White town and went to mostly White private schools. Her time at Morgan State was her first at a public school, which also happened to be an HBCU. It was the first time she had actually spent extended time with people outside of her race.

“I have this White perspective world, and I can try to do as much as I can to learn, but the ultimate thing is really just to listen,” Pelland says. “Going to Morgan State allowed me to just sit and listen to people. I don’t know if it would have happened say I had gone to another state school.”

Both experiences—going to a Black school as a White person with no real previous exposure to Black people, and then participating in the Bridging Selma project—she says, made her more vulnerable.

It forced her, she says, “to think about how I may be affected and then to think about how another person is affected. And also to look at the whole history, and whose [version of history], ’cause you know you can pick up a history book, and it’s not going to tell you the whole thing. It’s like you have to question everything.”

This semester, the Story Bridge students are covering the midterm elections, using quantitative analysis to examine whether the efforts of movements like #MeToo and March for Our Lives made a difference in who registered to vote, how the vote got out, and where differences showed up.

Morgan State students will travel back to West Virginia, and WVU students will head to Baltimore for their on-the-ground interviews with residents in those areas.