Recently released FBI and DHS documents reveal how the US government sees the movement as a potential threat.

Black Lives Matter protests have been monitored by the US government and have been seen as a potential threat, according to recently released documents from the FBI and the US Department of Homeland Security (DHS).

The documents, which include internal emails and field reports, were circulated among law enforcement agencies in 2016.

They were obtained as the result of a lawsuit filed by the Center for Constitutional Rights (CCR) and the civil rights group Color of Change (COC) and provided to Al Jazeera.

Black Lives Matter (BLM), which started as a response to US police killings of unarmed black individuals in 2014, has grown into a movement fighting to end systemic violence against black people.

The language in the files points to the monitoring of Black Lives Matter protests, protected by the First Amendment, based on a presumption of violence.

In July 2016, the FBI began warning of “attacks against law enforcement” after a gunman shot and killed five police officers at a rally against police brutality in Dallas, Texas.

According to the FBI’s own account, the gunman, Micah Xavier Johnson, acted alone. He had no known ties to Black Lives Matter or any other group.

Yet, in a series of emails dated July 8, 2016, the day after the shooting, the agency began using racially-charged language, suggesting Johnson’s actions were part a larger threat.

“Due to sensitivities surrounding recent police shootings, the threat of copycat attacks against law enforcement exists,” one email read. It added that “there is a threat of black supremacist extremists attempting to violently co-opt the upcoming DNC/RNC”, referring to the Democratic and Republican National Conventions.

Michael German, a former FBI agent and fellow at the Brennan Center for Justice, told Al Jazeera that the “blending of activities” of protesters and “someone they [the FBI] acknowledge is a lone actor can be misleading in police documents”.

German added: “If I’m a police officer on the street trying to address the concerns raised in this report, obviously, I’m going to be focusing on black people.”

The FBI has never publicly used the phrase “black supremacist extremists”, but a version of the term was used as recently as August, according to an FBI intelligence report obtained by Foreign Policy magazine.

The report, which was issued more than a year after the Dallas shootings, warned that “Black Identity Extremists” were violently targeting police.

“The FBI assesses it is very likely Black Identity Extremists perceptions of police brutality against African Americans spurred an increase in premeditated retaliatory lethal violence against law enforcement and will likely serve as justification for such violence,” the report, dated August 3, read.

German said that “part of this is searching for terminology that covers all the black people they are concerned about”.

Brandi Collins, campaign director at Color of Change, said the FBI has “been building this narrative over time”, adding that the department has been “trying to infiltrate organisations, and going to protests, to bolster this claim that black folks, in The Movement for Black Lives, are terrorist threats to this community”.

Another set of emailsfrom July 2016 reveal how the FBI may use specific language to justify data collection and monitoring, specifically in the case of Black Lives Matter.

While BLM demonstrations are protected by the First Amendment, the emails said that “based on known intelligence and/or specific, historical observations, it is possible the protected activity could invite a violent reaction towards the subject individuals or groups, or the activity could be used as a means to target law enforcement”.

The emails add: “In the event no violent reaction occurs, FBI policy and federal law dictates no further record be made of the protected activity”.

Omar Farah, lead attorney at the Center for Constitutional Rights, which sued to get the emails made public, said the “email suggests that the FBI makes bedrock First Amendment protections conditional based on its unchallenged view that BLM protests give rise to violence”.

“But the problem with surveillance – and particularly the historic and current surveillance of black-led movements for social change – is that the surveillance itself is what does all the work, even if, as the email claims, the FBI later stops recording protected activity,” he told Al Jazeera.

“Surveillance is what chills people from mobilising and organising.”

The emails also fail to reveal why BLM is being singled out.

“What are they actually drawing from as they’re building this narrative about violent reactions that they’re presuming will happen?” Collins asked.

“It definitely feels like to me it’s thrown in as this after-thought, as they’re going about collecting a breathtaking amount of data and information on people involved in the movement for black lives.”

A third document, dated July 8, 2016, suggests how misinformation may be playing a role in the government’s handling of BLM protests.

An advisory titled “UPDATE: Day of Rage Protests across America”, warned of the potential for violence at several BLM-related events taking place across the US, in the aftermath of the Dallas shooting. This document was first reported in The Washington Times.

“Being anywhere near these protests greatly increases the chance that you could become a victim of violence,” the advisory read.

“When the mob mentality takes over, normally decent people can commit heinous acts.”

The BLM movement tweeted that no such plans existed, after the story was picked up by several news sites.

The advisory was sent to Army personnel by the US Army North. The document was released to CCR through the DHS’s National Protection and Programs Directorate.

‘Does not police ideology’

Responding to questions about the language included in the documents, the FBI told Al Jazeera that it “cannot initiate an investigation based solely on an individual’s race”.

The department added: “Our focus is not on membership in particular groups but on individuals who commit violence and other criminal acts. The FBI does not and will not police ideology. When an individual takes violent action based on belief or ideology and breaks the law, the FBI will enforce the rule of law.”

US police chief wanted to ‘mow down’ black people

DHS declined to comment on specifics, but said that “as a general matter, DHS works with federal partners, including the FBI and state and local law enforcement through the National Network of Fusion Centers, to assess threats and analyze trends in activity from all violent extremist groups, regardless of ideology.”

But civil rights advocates say the reactions to recent events, and the conclusions made by the departments, which have been revealed in the released documents, point to a double standard.

A DHS field report from September 2016 emphasised the initial protests were legal, and said counterprotesters were mostly to blame.

The report said that during the June 26, 2016 protest in Sacramento, “violent anti-fascists, including anarchist extremist elements, attacked a group of white supremacists who gathered for a legally permitted rally.”

Mike German, who studies white supremacist movements, says the report fails to recognise that many of the people who organise and attend these rallies have documented histories of violence.

In 2017, violence erupted at a far-right rally in Charlottesville, Virginia.

Media reports and video recorded that day show police were slow to intervene.

“They, at least, had warning that these protests were likely to become violent. So you wonder why the police weren’t prepared for that eventuality,” German said.

The Color for Change’s Collins said the language in the DHS report is especially striking when viewed against the documents on BLM.

Gun control’s racist past and present

“It tells us who the government is training to view as threats and the rightful targets of ongoing surveillance and which groups will be offered protection.”

“And we have obtained an entire DHS report devoted to the threat posed by groups reacting to demonstrably violent, retrograde white supremacists. Read together, the documents reflect an unsettling blindness to the real challenges our society continues to face.”

The Center for Constitutional Rights and Color of Change said they continue to receive documents from the FBI and DHS related to the surveillance of Black Lives Matter.

Al Jazeera’s Fault Lines recently investigated the scope and impact of police and FBI surveillance of black activists in the US in its film: Confidential: Surveilling Black Lives. 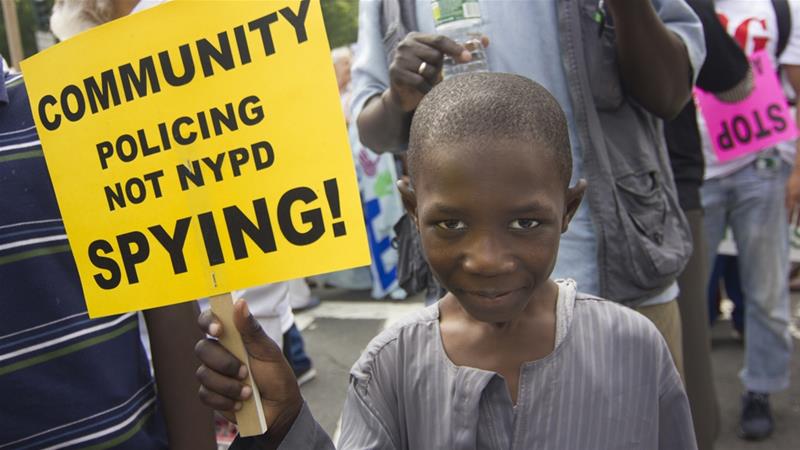