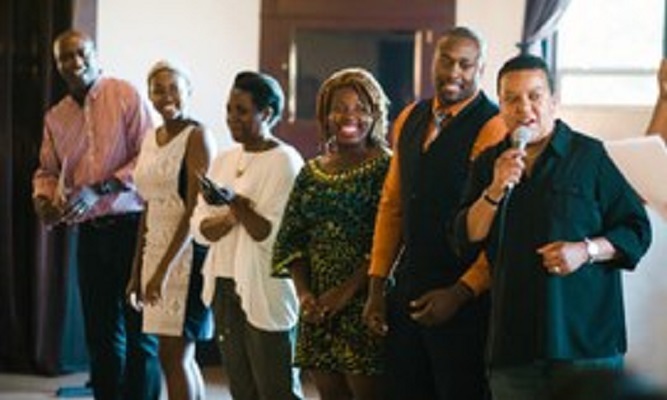 How This Black Entrepreneur Went From Homelessness to Housing Others

Collapse and regeneration are experiences Tyrone Poole knows intimately. There was that period back in 2006 when he was homeless—that moment when, on crutches and in excruciating pain, Poole found himself staggering into the bus station in Portland, Oregon, where he collapsed on a bench and threw up. That was how a policeman found him that night and later took him to the YMCA homeless shelter, where he got a cot on the gym floor. Everything he owned was in a bag under the bed.

What had led to Poole’s downslide was medical debt. He’d completed his associate degree at Portland Community College and was training to be a firefighter when he suffered a debilitating injury. The treatments left him buried under medical bills, evicted, his car repossessed.

As Poole told his story, he sat across the conference table in the elegant Williams & Dame Development building on Everett Street, in Portland’s hip Pearl District, where his new business has free office space. It’s part of the intricate web of support that has come to surround him, the physical embodiment of the community that oriented itself toward growing the seeds of resilience and genius in him. Poole is 34, African-American, with a trim beard and close-cropped hair, and on this day he was wearing a green T-shirt and crisp new blue jeans. He’s the founder of OneApp, a startup that has launched an online platform originally designed to match applicants for affordable housing with appropriate openings. Poole talked about being named Oregon Entrepreneur of the Year, how his team won a contract with the Portland Housing Bureau, and how other cities and states are lining up to tap his services.

None of that seemed in reach when he first hatched his idea. While in the homeless shelter, Poole began helping other residents find housing with their vouchers from the city government. Before long, the YMCA hired him as a family advocate. From his own struggles, he’d seen the reality of the statistic that people with housing vouchers have applications turned down by landlords 40 percent of the time. The system left thousands of low-income families stranded. In a system rife with racial discrimination, Black residents were three times more likely to be homeless than White Portlanders. A 2011 audit by the Portland Housing Bureau found discrimination against prospective Black and Latino tenants by landlords and leasing agents in 64 percent of cases.

Poole saw it as a math problem. He developed an algorithm that could match applicants with openings. “There’s little you know about how you fared on the screening criteria,” Poole explained, because those criteria are undisclosed. “It may be that if you pay off Sprint and an overdue library book, you’ll be OK.” With each application costing $30 to $50, a housing search can add up to a painful sum for threadbare pocketbooks.

Poole began to develop his idea for the web platform. “I knew it would work,” he said, “but I didn’t have the business knowledge.” Then he learned about the Startup PDX Challenge, a contest for entrepreneurs the Portland Development Commission, the city’s economic development agency, ran for three years.

Kimberly Branam, executive director of the commission, explained to us how that contest evolved to support underrepresented entrepreneurs like Poole. The original concept was that would-be entrepreneurs could compete to receive a package worth $50,000 that included mentoring, free office space, legal assistance, business planning support, and $10,000 (later increased to $15,000) in a working capital grant.

When the contest’s first group of winning founders was gathered together, Branam recalled, “We looked around the room, and they were largely White men.” The next year, the PDC refocused the contest on underrepresented founders, primarily women and people of color. It was one move in what would become a wholesale reorientation of the commission toward racial and gender inclusion—not as one piece of its mission, but as its new core.

The city realized how important it was to provide seed capital and mentoring at very early stages for underrepresented founders, so in 2015, it put out a request for proposals, looking for fund managers willing to manage an early-stage seed fund for these founders. The $2 million fund was launched in partnership with PDC, Multnomah County, and the state of Oregon and was the first publicly backed pre-seed fund in the country, to which the city contributed $750,000.

When Branam became director in 2017, she led the agency’s rebranding as Prosper Portland to reflect its reorientation to focusing on the traditionally disadvantaged. “Building an Equitable Economy” was the new goal. The challenge, the agency explained on its website home page, was “[t]he growing income and asset disparity between White people and people of color. Solution: Collaborate to grow jobs and increase assets among communities of color.”

We first encountered Branam a few years earlier, when she spoke at one of our Learning/Action Labs for Native Americans. What was striking to us was her frank acknowledgment of how the agency’s own work had contributed to racial exclusion. We learned that she’d talked about this not only to our small group, but at the massive Social Capital Markets conference held annually in the Bay Area. In a presentation titled “A Tale of Two Cities,” she’d spoken about how the progressive image of Portland was belied by a stark racial divide to which city economic development had actively contributed. Something remarkable seemed to be happening in Portland—a powerful, citywide pilot in the principle of inclusion. It warranted a journey there to learn more.

Far from considering himself a self-made man, Poole credits the large team of helpers he’s assembled. For example, when he hit his first stumbling block in the $150 application fee for the PDX Challenge, Poole found help from Stephen Green, business development officer with the city, himself a prominent Black entrepreneur. He was “my saving grace,” Poole said.

Then came social obstacles. “I remember going to the first mixer PDC hosted for the Challenge,” Poole recalled. There were people there with logos and matching T-shirts speaking a jargon-filled language he found intimidating. “Everyone was mingling. I mingled with no one,” he said.

At each step of the process, Poole expected to be eliminated. “I remember my first pitch ever,” he recalled. “Everyone had handouts with diagrams, graphs, and PowerPoints.” He had a tablet with a single piece of paper. “I ran to the copy machine to copy things. I had on my only suit, and I was sweating so bad, my suit was soaked.” His pitch that day proved so compelling, it advanced him to the top 20 out of 150.

“I work at a place where 50 percent of the families will be out on the street, even though they have a letter from the city government authorizing access to housing,” Poole explained. “When I got out of the hospital myself, I qualified for 1 percent of all available housing—10 out of 1,000. That’s like finding a needle in a haystack. Do you know how much time it takes to find a needle in a haystack? If it exceeds the amount of money and time a family has, it will result in denial of housing. Every application, every screening, costs resources that the people who are applying have in short supply. The two moving pieces have to match up. I can reduce the information to one platform. With one click, an applicant can be screened against all available homes.”

Poole became one of the six winners, receiving a $15,000 cash grant and other services. His challenges had only begun.

“I didn’t need cash,” he explained. “What I needed was a clue how to make this idea a reality.” The development commission connected him with a mentor, Jon Maroney of the Oregon Angel Fund—a group created in 2007 to invest $100 million in 100 local startups, with an aim of creating 10,000 jobs in Oregon. “He gave me a check for $25,000,” Poole said, which was used to create a beta site. “It was trash,” he added with a laugh, but it demonstrated proof of concept.

“The most important thing Prosper Portland gave me was validity,” he continued. “That social capital, I was able to use it like it was capital.” There was the time TransUnion, a large credit rating firm, denied him access to the credit scores he needed for his platform. Then development staffer Katherine Krajnak asked Branam to draft a letter. “The next thing you know, TransUnion gave me the credit database,” he said. “This is information that you can go to prison for misusing; they gave it to me, a nobody, because of the city of Portland.”

The principle of inclusion is fundamental to creating a democratic economy designed for the flourishing of each and all. In such an economy, Poole’s perspective as a once-homeless person becomes an asset to be developed. He, in turn, takes a market approach, not a social service approach, to helping the low-income. Inclusion is thus built into basic economic processes: entrepreneurship, economic development, product development. That’s fundamental to democratic economy design; social purpose isn’t added on but is at the core.

This is a very different approach from giving welfare to the disadvantaged while giving economic development assistance to wealthy Whites, as in today’s economy. Such an approach reflects an implicit belief that stigmatized groups cannot advance “the progress of history,” in the words of Martin Luther King Jr. What is lost is a loss to the whole.

Imagine if Portland had not run this contest, if there had been no mentoring—what would Poole’s future have been? In our extractive economy, how much talent is left to wither painfully on the vine?

Edited excerpt from The Making of a Democratic Economy: Building Prosperity for the Many, Not Just the Few by Marjorie Kelly and Ted Howard of the Democracy Collaborative is published by Berret-Koehler Publishers (2019) and appears by permission of the authors.