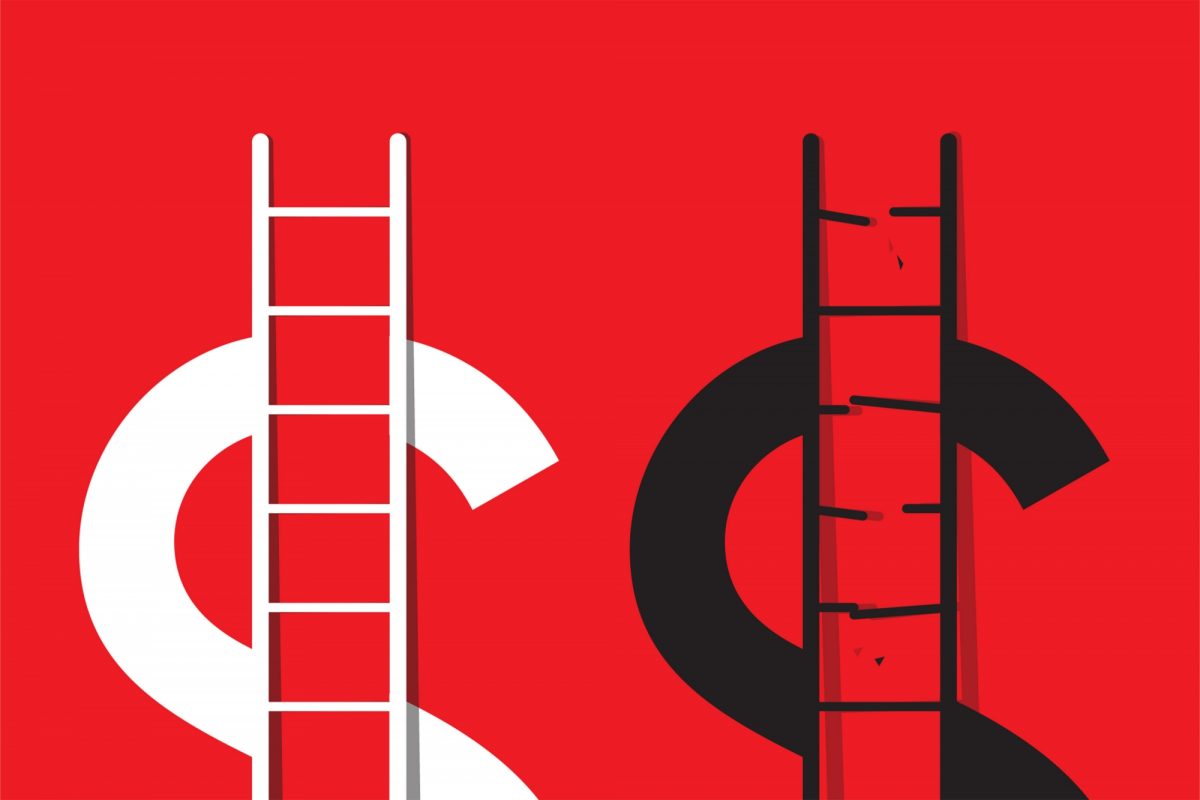 How to Get Wealthy If You’re Black

Forget all those slow outdated ideas about how black people can become wealthy by working hard and climbing the corporate ladder, investing in stocks, bonds and mutual funds, and owning a home. While those are safe investments for retirement and can help you increase your net worth, who wants to wait until they’re 60 years or older old to receive the earnings from those turtle-like investments? Of course, you should keep contributing the maximum to your 401(k) to the point where your company stops matching, as well as maintain your planned contributions to your Roth IRA. But if your like me you want the what I call, “Now Money!”

If you analyze the Forbes Richest Americans and The Black Economy’s Wealthiest Blacks lists you may be disappointed to find out none of those included became wealthy simply by contributing to their Roth IRA or 401(k). You can become a millionaire if you can find a way to save $2,000 a month for forty years, but more than likely you will be too old to enjoy it all. The typical black family net worth is only $6,166 and the majority of that amount was due to owning a house. So simply buying a house is not the key to wealth! The question becomes how can I make money and accumulate wealth now? The answer: It’s no secret that 75% of American Millionaires are business owners or “Ballers!”

When I was 26 years old, my net worth was approaching $75,000 and this did not include owning a home. Instead, I owned a quarter million dollar enterprise, which operated from the trunk of my car. How does a young black male create this kind of wealth without taking out loans, working a “9 to 5” or engaging in illegal activity? The keys to accomplishing this are as straightforward as:

* Developing a business model or simply “a way to make money”

* Adding leverage to your business model

You may not realize it, but in 2007, being black places you in a favorable position to capitalize on unique financial opportunities in Capitalist America. The hip-hop industry, mainly music and clothing, is a \$5 billion business that is creating millionaires almost overnight. The hip-hop economic impact has created numerous wealth opportunities in the black community. Money is generated from the selling of Cds, clothing, radio, clubs, recording studios, marketing websites, promotional teams, models and the list goes on.

If you have not recognized how you can get your piece of the hip-hop wealth pie, then you better start rethinking and jump in before the window of opportunity closes. Think about it! You probably know more about this hip-hop market than 84 year old Caucasian Sumner Murray Redstone, who is majority owner of Viacom, which now owns B.E.T. Since you are a consumer in the hip-hop market, you just have to think, focus and create a financial plan of action. Now lets get it started!

In this 21st century globalized economy, eBay and Myspace have demonstrated that the marketplace for buying and selling almost anything is profitable. Is eBay anything more than an on-line garage sale? With over 200 million people selling over 600 million items valued at over $50 billion in 2006, I bet you would have never thought having a garage sale could be so profitable. First things first, read and get financially educated. Then you must find a product to flip. In the beginning, I suggest products over a service because a service will require more labor and time, if not yours then someone else’s and that equals employee expenses which will eat into your profits and give you administrative headaches. Also, the products can make money faster than the service, which is crucial to accumulating new capital or extra cash to expand your business.

Find a product you are familiar with because it will be easier for you to sell and most importantly, you will know its market value. I started out in retail clothing because I loved clothes, but I hated paying the high cost for the designer brands. So I would buy clothing at a discount and resell it to people I knew would either match the price I paid for it or pay at least 30% markup above my cost. Once you’ve found a product, try to monopolize it and control the supply in your market or hood. Once you are able to control the supply, you have a better chance at successfully influencing the demand and prices for your product.

2. Study your market or “the buyers in your hood”:

I started out five years ago selling hip-hop clothing from the trunk of my car. I carefully studied my market of black consumers in North Dallas and South Dallas and assessed how much they spent on clothing and how much I could profit. Being black, I also studied my personal spending habits and the spending patterns of my peers. The biggest expense I found was apartment or house rent, then car notes and finally food and clothing. However, house rent and food were survival purchases and they cost about the same amount each month, but I discovered that my market was made up of many extremely impulsive buyers for clothing.

You see most people have to make a conscious decision to go shopping, they say to themselves, “I’m going to the mall today to buy some shoes.” However, since I was selling from my vehicle not only was I convenient for consumers and saved them a trip to the mall, I could show up every week with something new and if they liked it they would purchase it. So someone who only went to the mall 3 or 4 times and spent $200 a month, was now purchasing from me weekly and spending about $400 a month. I remember having one customer tell me, “you are here every week and I can’t help but stop to see what you got because I feel like I may be missing out.”

3. Add leverage or “use someone else’s time, money or efforts to benefit you”:

Making $250,000 in a year sounds like an unattainable amount for some people. But if you posses the Michael Jordan mentality then it becomes achievable. Michael Jordan is arguably the greatest basketball player ever to play the game. And I remember NBA TV analyst, Ahmad Rashad asking Jordan in an interview how he consistently scores 30 plus points per game? Jordan simply replied “I don’t look at it as scoring 30 or 40 points a game, my game-plan is to just make 4 layups per quarter, plus the free-throws when I get fouled.” Looking at it that way, four layups in twelve minutes seems pretty achievable and once completed totals 32 points a game and once you add in the free throws you can see how Jordan scored 40 or 50 points easily.

Now let us analyze how you can make $250,000 in a year using the Michael Jordan mentality. Now $250,000 a year is about $20,000 per month or $5,000 per week. Let’s start with an item (a Polo Shirt) that I sold for $35. To make $5,000 in a week I had to sell about 140 of those items. Selling 140 of the same item was difficult for me at first and since I got tired of driving all over Dallas/Fort Worth to sell them, I used the familiar concept called divide and conquer. I agreed to let three others sell the items for me in return for a portion of the profits.

Now 140 items divided by three people is about 47 items per week or only 10 polo shirts per day (and that’s only a 5 day work-week). Now that was a cakewalk for me and it became so easy that I advertised on Craig’s List and got two more people selling items for me in Houston and then the small towns (Tyler, Longview, etc.) and on and on. And it gets extremely easier once you add various items like Sean John Jeans, NBA hats etc. to your inventory.

4. Stay loyal to your sales area or “the blocks in your hood”:

I remember after I had North Dallas and South Dallas saturated I began to expand to Fort Worth,TX and setup shop on a busy street in a burgeoning black suburb. I like black suburbs because they are consumers with more income and higher spending capacity and there was less risk of me being robbed for my inventory. When I first started, a few customers would come by, but not purchase anything from me, I was actually operating at a loss because driving to Fort Worth cost me more in gas than I made in profit. As I think back they were just getting to know me and after seeing me week after week, they became comfortable, and like any comfortable customer they did not mind spending their money every time they saw me. Believe it or not, I was the one of the only self-employed hustlers offering exchanges and store credit on the streets.

5. Re-invest the profits or “stacks”:

I would like to emphasize this so repeat after me; re-invest the profits or stacks! I have known several past self-employed hustlers who became broke because they could not resist spending the profits generated from their businesses on “hood rich” items like new car rims that are valued more than the car itself, “gold grillz” without dental insurance, and excessive jewelry. If they had only known that they could’ve eventually had all those “bling things” and more if they only waited just a little longer to make sure their money machines were stable and consistently created cash-flow. Before you get that new BMW 7 series please prove to yourself that you deserve it by creating another income stream to pay the note. And since you are calling yourself CEO on your business cards, don’t front and actually setup a traditional C corporation or L.L.C. business structure so you can write off the note on your taxes.

6. Repeat the process or “double up”:

Once you master the art of product flipping with small items like clothing, Cd’s, DVDs, etc. you can finally move onto big ticket items like houses, small businesses and commercial real estate. At this point you have graduated to a deal making entrepreneur and don’t have an inventory, but simply your cell phone and computer are making thousands for you. For now, get financially educated by consistently studying money, finance, and business. Then develop a business model or a way to make money and determine how you can add leverage to that business model. It may take you some time in the beginning, but take baby steps, and soon you will be making extra money and hopefully creating wealth in no time. Remember, the main difference between the rich and the poor is ACTION!

James “Bird” Guess graduated college with dreams of climbing the corporate ladder and becoming a prominent financial executive. But after only working a year in “Corporate America”, James grew bitter of the politics and bureaucracy associated and decided to venture out on his own to become a full-time entrepreneur.

With a repossession and other unpaid debts on his credit, James had a negative net worth. Determined to take control of his financial life, he began to study money, business, and wealth on a daily basis.

Starting with only $1,000 saved from college, he single-handedly built a quarter million dollar apparel business from the trunk of his car. Shortly thereafter, his business model would transition from retailer to wholesaler of apparel, which generated $750,000 dollars in revenue.

James could now take one step closer toward financial freedom. As an entrepreneur, he has bought and sold over $1.5 million of apparel. He now uses his financial acumen to help individuals, entrepreneurs, businesses and investors create wealth in their lives!