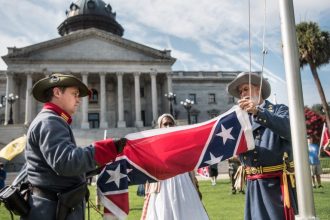 The South continues to lie about the Civil War. They’ve done it for eons, with the most prominent lie being that, somehow, the war was not about slavery. Now, they want to put that nonsense into public schools – all under the guise of “honoring” the black people who served in the Confederate Army. There’s just one problem with that: Historians can find absolutely no record of black people willingly serving as Confederate soldiers. According to Walter Edgar, who is the head of the Institute of Southern Studies at the University of South Carolina, says of the situation:

“In all my years of research, I can say I have seen no documentation of black South Carolina soldiers fighting for the Confederacy. In fact, when secession came, the state turned down free (blacks) who wanted to volunteer because they didn’t want armed persons of color.

And this makes sense. After all, the black people in the South back then were all slaves. The few free blacks were very oppressed. Why on earth would they willfully continue their own enslavement? It makes no sense whatosever. That isn’t stopping State Rep. State Rep. Bill Chumley (R-Woodruff) and State Rep. Mike Burns (R-Taylors), though. Chumley says of his efforts to push false history into the classrooms of South Carolina public schools:

“We are all learning a lot. The purpose of the bill is education.”

You’re not learning shit, Chumley, and neither is anyone else, because what you are pushing is not at all true. This is just another effort for racist southern Republicans to whitewash the Confederacy and the Civil War to make themselves feel better and to make the disgraceful south look better. It has nothing to do with education, and everything to do with racism, veneration of the Confederacy, and falsifying history – all under cover of trying to pretend you actually care about the history of black people in the old south. Shame on you.