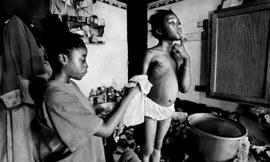 Indoor Plumbing Arrived in the U.S. in the 1840s. This Town Got Tired of Waiting

The Washingtons lived in New Road, a historically Black section of Exmore that was often ignored by city officials. But Washington was part of a dedicated group of community members who took matters into their own hands and improved what were long accepted conditions. She was enthusiastic about continuing that work, but she passed away shortly after speaking to YES! for this story.

While much of New Road didn’t have sewers or septic systems, other parts of Exmore did, according to a case study from New York University’s Wagner Research Center for Leadership in Action.

“We had outdoor pit privies for years,” Washington said. “That’s what everyone in the community grew up with.”

This norm began to change when longtime resident Ruth Wise founded the New Road Community Development Group of Exmore, an affordable housing nonprofit. For years, Washington served as Wise’s assistant during the early stages of the New Road organization.

Ava Gabrielle-Wise, Ruth’s daughter who also grew up in New Road, recalled that many of the people who own homes in New Road today have Washington to thank, as she did much of the organization’s operations work.

“A major part of our history is lost there,” Gabrielle-Wise said.

In 1992, the New Road Community Development Group started to advocate for indoor plumbing. Then in 1995, the organization bought property and land, on which Washington’s home now sits.

Exmore is a rural town in Northampton County on Virginia’s Eastern Shore that in 2017 had a population of 1,396, about 38 percent of whom were Black. Washington described her hometown as “a family community.”

Many residents make little money, which makes buying a home a challenge. The median household income in Exmore is $17,639, according to the U.S. Census, and the Black unemployment rate in Exmore, 5.6 percent, is four times the overall rate in the town.

“We knew it would change the political dynamics in the county if they could go from being renters to buyers.”

In addition to building new housing with indoor plumbing, the development group wanted to create jobs for the New Road community’s residents. “Economic development is important if communities are to get ahead … and this project helps communities with economic development as well as housing,” Ruth Wise said in 2000, when the nonprofit received an award from the U.S. Department of Housing and Urban Development.

Ruth Wise died in 2017, but the impact of her and Washington’s leadership has been noticeable. Gabrielle-Wise said that when she was young, most of the homes in the community were shotgun houses: small and narrow with two or more rooms laid out in a straight line from front to back. They were cheap and generally lacked amenities like indoor plumbing. In the 1970s, when Gabrielle-Wise was 8, her mother asked her something to the effect of, “Does it strike you in any way that the people you know and love don’t have bathrooms and running water in their houses?”

About two decades later, in 1992, the town of Exmore was debating the installation of indoor plumbing to cover the southern part of Exmore. The New Road area is in the north, and residents in the community wanted to be included in the plans. The local government was trying to secure the funding to put that system in, but ultimately the plan was defeated.

Still, residents in New Road wanted indoor plumbing. In 1992, most of the housing in New Road was owned by absentee landlords, so the Wises and other community members decided they would become landowners. To them, it seemed like the only way to get the infrastructure they needed. The group had a set of approaches to its work, according to the NYU Wagner case study. The goals were to be ambitious and stick to it, present a truly united front, retain autonomy, and gain allies.

The McAuley Institute, a Silver Spring, Maryland-based Catholic philanthropy organization, became an ally to the New Road Community Development Group when it lent more than $350,000 to the group. The organization used the funds to purchase 30 acres of property from those absentee landlords.

The McAuley Institute’s mission was to help low-income communities help themselves. The New Road group’s approach to solving community problems made it an attractive partner.

“From the beginning, they were very clear about their own goals, their strengths, and the gaps [to fill] to be successful. They were politically astute,” said JoAnn Kane, who was the president and CEO of the McAuley Institute at the time.

“They clearly had mapped out where they might find resources, but because it was such a pure community group, they didn’t qualify for a lot of federal resources at that particular point.”

As a philanthropy, the institute could help. Kane said lending to the New Road Community Development Group allowed McAuley to take its mission to a deeper level.

“We knew it would change the political dynamics in the county if they could go from being renters to buyers,” she said.

“We decided to develop it ourselves using the skills that we have, which are mostly farming and agriculture.”

“We probably wouldn’t have said it at the time but it was really about a commitment to racial and economic justice that we could advocate for bigger systemic change by doing this highly defined local project.”

And it did have that impact. Ownership meant power. After being renters for generations, New Road residents were on the path to be property owners who had a bigger influence on the politics of the town and control over decisions in the New Road area of town.

After the New Road Community Development Group bought the properties, it designated the lots for residential and commercial use, with the intention to create jobs and address economic disparities in Exmore.

Housing and utility infrastructure were the first priorities.

The community organizers researched various communal models of ownership to figure out what would work best for them. For example, they considered a community land trust, but ultimately decided that they wanted each household to each own its respective “piece of dirt,” Gabrielle-Wise said.

The group formed an organization that would work like a collective when it comes to negotiations and communication, but the properties would be divided and be owned by each individual family, Gabrielle-Wise recalled.

Each homeowner bought a lot, and New Road Community Development Group worked with local and state government to structure housing finances so that all homeowners could build on their respective lots.

“We had to shop for funding programs that would allow [the organization] to buy down the cost of [residents’] mortgages to make them affordable for people’s income,” Gabrielle-Wise said.

The New Road nonprofit partnered with another local organization called the Northampton Housing Trust, where Gabrielle-Wise was a community organizer, to form the Virginia Eastern Shore Economic Empowerment and Housing Corporation to serve the entire Eastern Shore. Together, the organizations applied for a federal grant for housing.

The development group received $400,000 of that money and used it to pay down the mortgages of community members. It also received funding from the U.S. Department of Agriculture’s rural development grant program. The result of that process: About 70 New Road households now each owned a home on a quarter-acre lot.

Community members and organizers committed themselves to change and worked to raise money for their projects with small-scale fundraising, including dinner sales, car washes, and dances.

In 1998, the community finally had a plan for indoor plumbing. That was the same year Ruth Wise left her position as an instructor at the local community college to serve full time as the nonprofit’s executive director. In 1999, the community’s sewer system was built.

Ruth Wise was the last resident to get her new home, her daughter said, because of her mother’s selflessness.

“I would say she was always her last thought, but I don’t know if she ever thought about herself,” Gabrielle-Wise said. “I can’t say she ever really did.”

The New Road community was important to Wise. While she was seen at the community’s leader, she always took others with her to meetings and events. And if that wasn’t possible, she acknowledged her colleagues in those spaces, “because it’s important that the message of community was always conveyed even if she was the person who was leading the charge,” Gabrielle-Wise said.

Now the daughter fills a similar role and works to continue her mother’s legacy.

Most of the homes in New Road are now paid off, and the community group has now developed rental properties. The next chapter for the New Road Community Development Group is to develop its commercial property along U.S. Route 13 to create better jobs for residents.

Over the years, the organization has tried to recruit retailers to the area to occupy that commercial property, but attracting industry and major retail to the remote community has been difficult, Gabrielle-Wise said.

“We decided to develop it ourselves using the skills that we have, which are mostly farming and agriculture,” she said.

They’re exploring aquaponic and hydroponic farming of food and specialty crops like hemp, which was legalized for research in Virginia in July 2018. Wise said they’re hoping to pair that with a “commercial-grade kitchen that we can use to mass produce food products hopefully for sale in the local but also in nonlocal marketplaces.”

While this project is still in its infancy, New Road is now building two greenhouses on the commercial property. Gabrielle-Wise said the group is working to apply for funding in January 2019, which would further finance the agricultural effort. Before she passed away, Washington also was looking forward to working on the group’s next steps.

Gabrielle-Wise said she’ll continue on the work that her mother, Washington, and other New Road residents did for decades, though it might take time to figure out the organization’s next steps.

“The commitment is there,” she said. “I just don’t know what it looks like right now.”