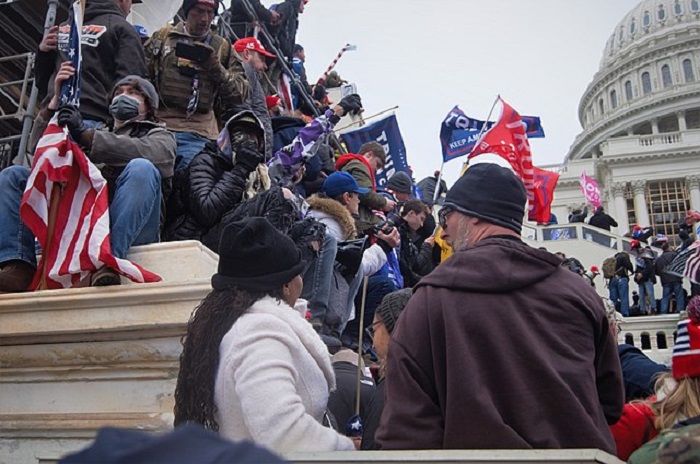 Details continue to emerge about the Jan. 6 U.S. Capitol incursion. Exactly what happened – including the degree of planning involved and rioters’ possible connections with Capitol police or even members of Congress – may not be known for some time.

But there are looming threats of more possible violence, not just in Washington, D.C., but in all 50 state capitals. As a scholar of American militants, I see the groups behind the Jan. 6 events looking beyond Inauguration Day toward broader opposition to the Biden administration.

Among the insurrectionists were members of various groups with a wide range of generally right-wing views, including neo-Nazis, Proud Boys, Oath Keepers, Three Percenters and militia members. There were also supporters of Donald Trump who likely see themselves as concerned individual citizens, rather than members of any preexisting groups.

Among the militia groups I study, some truly believe the presidential election results were fraudulent, though there is no evidence of that. Some – regardless of their perceptions of the election’s legitimacy – do not want to see Trump’s tenure end because they believe Biden’s proposed policies threaten their ideal America. That image prioritizes individual effort and achievement, and disdains social welfare. It also discourages efforts to have legislation – or even hard conversations – that would move toward reducing systemic racism or other oppressive structures in society.

Their goals in traveling to the Capitol from all over the country included symbolically supporting Trump, forcibly “stopping the steal” of the election from Trump and even starting a civil war.

What they have in common

Beyond wanting to keep Trump in office, these different groups had other shared views. Those who attended were generally attentive to Trump’s own messaging about Jan. 6, encouraging them to believe in the illegitimacy of the election and to individually do something about the outcome by protesting in person.

Most – but notably not all – were men, and the vast majority appear to have been white. White voters have always comprised the bulk of Trump’s support. White men comprise the majority of militias and similar groups, so their representation at the incursion is not surprising. Their presence is, however, likely evidence of some of their motivations.

The groups I study are, at their core, nostalgic groups who believe America as it should be has already been lost, and who look to the past in search of a society where all citizens, but especially men, were more self-sufficient and less reliant on the federal government. They believe it is their moral responsibility to prevent a further decline of American society and, where possible, to fight for a return to this earlier time.

Many insurrectionists at the Capitol held flags or wore clothing with references to 1776, which has been used in some overtly white supremacist groups, but has been more widely used by groups calling themselves “patriots” for decades to symbolically advocate for a second American Revolution and a return to a smaller government that, from their perspective, better remembers it serves the people.

A complex relationship with authority

These groups, which traditionally have been described as “anti-government,” in fact have a much more complicated relationship with government and other authority.

Most see constitutional leaders as legitimate and worthy of protection but believe it is their sole prerogative to determine who lives up to that standard. They also believe that liberals and others who disagree with them should not have an equal say in the direction of the country or in which leaders should represent the people’s collective interests.

Footage from the Capitol, including the extended video released by the New Yorker, shows how these people view themselves as the arbiters of who is good and who is bad, in at least two ways.

In a scene when men are rifling through desks on the Senate floor, they initially misunderstand paperwork and believe Sen. Ted Cruz was going to “sell [them] out” by accepting Biden’s win in Arizona.

But then they say “he’s with us” after another man notes that Cruz was actually objecting to Arizona’s outcome.

Others, looking for evidence to “use against these scumbags” – by which they mean members of Congress whom they believe are disloyal to the people – say, “I think Cruz would want us to do this.” These people frame Cruz as a morally just representative, in contrast to other senators and representatives.

The video also shows apparently contradictory responses to Capitol police. Some groups involved likely do have different views of police, but much of the response was driven by whether they believed any given officer was protecting the public or the government.

Some participants told officers they appreciated and supported them, such as the improperly masked officer in that same New Yorker video who asked a man sitting on the Senate floor if he needed medical attention while voicing few objections to their actions. Other participants physically attacked and yelled racist slurs at officers seen as blocking entry into different parts of the building or generally opposing their efforts.

Predicting what may happen on Jan. 20 is difficult, in part because efforts to take these groups and their communications offline make systematically monitoring them more difficult. In addition, from conversations I have had with members and from what I can see on message boards, these groups and their members do not yet agree on what their next steps should be.

Several groups who had previously planned to protest either on or shortly before Inauguration Day now say they believe participation to be too risky. That may be a reason behind the relatively low turnout for protests at state capitols on Jan. 17, despite initial promises of mass action.

Some groups are undoubtedly deterred by the increased law enforcement presence in Washington, D.C. Others are now saying they believe plans for demonstrations to be “false flag” events – essentially fake protests whose true intent is designed to malign people they view as “real patriots,” or to bring them out in the open so the FBI and other agencies can identify them for further arrest or harassment.

Some, influenced by QAnon conspiracy fantasies, even believe that either Trump or Biden may enact martial law on Inauguration Day – Trump to maintain power, or Biden as part of a broader plan to control citizens and move America toward a dictatorship.

What is more concerning is the potential for small groups or individuals to plan and act well past Jan. 20.

Trump’s inflammatory influence may be long-lasting, and it was not the root cause of unease for many of these groups, whose anti-government stance predates Trump and will outlast him. Even after Biden takes office and does not implement martial law, their suspicion and feelings of alienation will not immediately dissipate.

Some will be looking for signals that they should again act to combat what they see as governmental tyranny. Small groups and individuals may continue to plan violent actions, in what could amount to an uncoordinated campaign of domestic terrorism.

Potential national mandates related to controlling the coronavirus could be especially important flashpoints for these groups, and Biden’s administration will likely have ongoing and enormous challenges in moving forward without strong – and possibly violent – opposition to change.