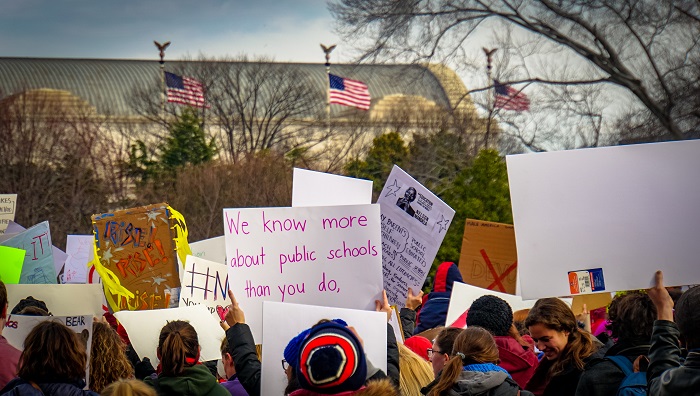 The intent of school desegregation is clear: Black and white children should attend the same schools, and Black children should not be relegated to inferior buildings, learning materials and extracurricular activities.

While separate-but-equal is no longer legal, the reality is that today many Black children do not experience inclusive public school education. Inclusive education not only responds to the needs, interests and backgrounds of Black children, but it also incorporates diverse learning – such as not teaching predominantly white history.

As scholars of inclusive education, particularly for Black and deaf students, we believe public schools need to do much more to serve the needs of these children.

Before the 1954 Brown v. Board of Education decision, Black children attended segregated schools that were full of Black teachers and other leaders who shared their Black experience.

These adults passed along spoken and unspoken rules about living while Black in the United States. A contemporary example might be teaching and role modeling confidence in the face of negative stereotypes and statistics. For example, having just one Black teacher by third grade reduces the risk of Black boys dropping out of high school by 39%.

Vanessa Siddle Walker, a professor of African American educational studies, summarizes three goals of inclusive education: access, aspiration and advocacy. Access is using the same buildings and educational resources as other neighborhood children. Advocacy is having leaders who inform and support Black children. And aspiration is offering Black children models of what success can look like as adults.

Black children in segregated schools did not have access to the same buildings and educational resources as white children. Desegregation was an attempt to solve the access barriers and a step forward from the worst educational inequities under Jim Crow.

But inequities and segregation persist. Many of today’s K-12 public school students have teachers who are unprepared and unable to inform and support Black students’ realities of being Black. Nor can they offer examples of what success looks like for Black adults. Black teachers comprise just 7% of U.S. public school teachers even though 16% of their students are Black.

Furthermore, the messages within schools since integration have not supported Black children in general. We believe desegregated schools today are systemically racist. For example, most history lessons don’t teach a true picture of what enslaved people experienced in the founding of this country. And generally, school curriculum paints racism as a thing of the past – ignoring the racism that Black people experience now. Most teachers lack specific training in anti-racist and inclusive teaching and learning.

Law professor and author Patricia Williams coined the phrase “spirit murdering” to recognize the devastating impact this education system has on Black people. Bettina Love, a professor of educational reform and abolitionist teaching, expands on this by saying, “Racism is more than physical pain; racism robs dark people of their humanity and dignity.”

These losses in the move toward school integration also apply to other underrepresented students throughout the U.S.

For today’s students who aren’t native English speakers, bilingual language policies in the U.S. have usually focused on English fluency rather than supporting continued fluency in the native language as well.

Meanwhile, schools for deaf and hard of hearing children are closing. That’s partly because small, specialized schools are expensive, and partly because placement decisions by special education teams increasingly send these kids to local schools first. Special education law requires that – to the maximum extent possible – students with disabilities are educated with children without disabilities.

In all of these cases, students on the margins have much less direct access to adults with similar life experiences.

There are many ways to make today’s classrooms more inclusive.

School leaders – from teachers and principals to district superintendents – can partner with local communities to determine how to improve their children’s schools. One solution is for every school to have role models that represent a school’s diversity – such as Black, deaf and Indigenous.

Curriculum designers can rely on more Black and other diverse perspectives to help address the historical whitewashing of U.S. history and integrate horrific events such as the Tulsa Race Massacre.

Training programs can better prepare all teachers to teach about race and diversity, and to support marginalized students.

In short, we believe current practices are spirit-killing: They bulldoze over children, families and communities, leaving them academically traumatized and fighting to be seen and heard. The above recommendations come from a perspective of spirit-uplifting instead.

Most importantly, we believe society needs to admit that the experiment of desegregation has not solved the problem. It has not led to true abolition, inclusion and deep learning in U.S. public education for children who are Black, Indigenous, bilingual, deaf or have disabilities.