Mohammed Ssemanda, a 50-year-old Muslim man from Uganda, made news headlines all over Africa last month, when he married three women in a single ceremony, because he couldn’t afford to marry them separately.

Ssemanda, a food vendor from the town of Katabi, in Uganda’s Wakiso district, caused quite a shock when he showed up at the local parish with three women, all wearing white wedding gowns. He told reporters on the scene that his wives all know that he isn’t doing very well financially, but they all agreed to marry him out of love. The 50-year-old added that the women aren’t jealous of each other and know that he will work very hard to support them. 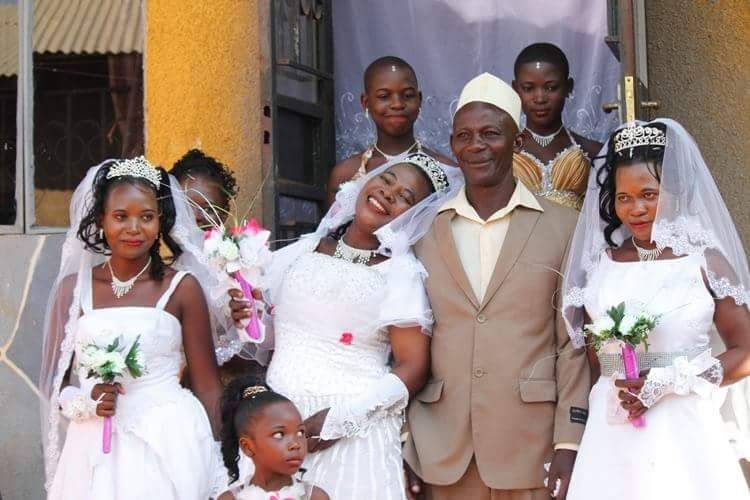 “My wives are not jealous against each other. Good enough, each has got a home and I promise to work harder and support them,” the man said, adding that he opted for a single wedding ceremony because he just couldn’t afford to pay for three weddings.

His brides, 48-year-old Salmat Naluwugge, 27-year-old Jameo Nakayiza and Mastulah Namwanje, 24, were all overjoyed during the ceremony and seemed to enjoy all the attention. Interestingly, Naluwagge has already been married to Mohammed for the last 20 years, so this was just a renewal of their marriage. The couple have five children together. If you couldn’t tell from the photo, the other two women are actually sisters, and also have children of their own.

Asked how she feels about the 3-in-1 wedding, Salmat Naluwugge told Uganda Vision: “I thank our husband for marrying us all at once; it is a sign that he will not discriminate or take sides with any of us.”

Poligamy is frowned upon even in most Muslim countries, with many believing that it is only acceptable for the sake of widows and orphans with no means to support themselves, so Mohammed Ssemanda has drawn some criticism. However, there were also those who applauded his idea for the simple reason that it saved money.