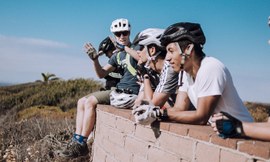 When former professional skier Chris Rutgers founded Outdoor Outreach in 1999, he was simply paying forward what he credits for helping him reconcile his own childhood trauma: experiencing the outdoors with a community of peers. The San Diego-based nonprofit, which is funded through charitable donations and grants, has served more than 10,000 mostly poor and non-White youth for nearly 20 years.

Exploring the great outdoors is often associated with Whiteness and economic privilege. But Outdoor Outreach and other youth development programs are shifting the narrative. These organizations aim to make the outdoors—and by extension, the mental, physical, and social benefits of outside exploration—more accessible to populations traditionally disengaged from outdoor recreation.

Outdoor Outreach engages at-risk youth, at no cost to them, through outdoor sports, environmental stewardship, civic engagement, and leadership training. More than 90 percent of participants come from low-income households, and a significant portion are either immigrants or the children of immigrants, executive director Ben McCue says.

Activities are preceded by a verbal behavioral contract between staff and participants where everyone agrees to respect themselves, their comrades, equipment, and the environment. Storytelling is also an essential part of the process, with kids debriefing both sensory and emotional takeaways from their adventures. The goal, McCue emphasizes, is for the youth to create “new possibilities for themselves” through engaging with the outdoors.

“A lot of the youth we serve don’t have access to these outdoor spaces, or these spaces don’t feel safe to them,” says McCue, adding that, “when they go out there, they don’t see a lot of people who look like them.”

One study found that, in New York City, even when low-income people were near parks and green spaces, considerations such as walkability, safety, and traffic limited the accessibility of those spaces.

Inequities in how outdoor spaces are utilized are also entrenched in historical racial and economic marginalization. Research into the respective relationships between various demographics and the outdoors has found that people of color typically view outside recreation less favorably than White people. The legacy of segregation, forced outdoor labor, and racial violence, for example, has contributed to Black people collectively minimizing interactions with the wilderness. Jim Crow era laws excluded Black people from “Whites only” public spaces, including parks and beaches.

For undocumented immigrants, enjoying the outdoors can also contradict a sense of safety.

Luis Perez, 24, began participating in Outdoor Outreach as a ninth grader at El Cajon Valley High School on the east side of San Diego. Before this, he hadn’t spent much time outside since coming to the U.S. at age 11; his family’s immigration status and looming fears of deportation made staying indoors more appealing.

“My parents just did not feel comfortable going outdoors, not even driving on the freeway,” Perez recalls. “Growing up in Mexico, there was a tree right in front of my house, and I remember always climbing that tree. So when I was able to [rock] climb in a natural place it was like a playground to me.”

Now an avid rock climber and backpacker, Perez has traveled across the country to indulge his enthusiasm for the outdoors. He became an Outdoor Outreach staff member upon graduating from El Cajon Valley in 2012, after completing a training course through which high school juniors and seniors can become paid instructors. Perez became the coordinator for Outdoor Outreach’s leadership program this March, helping high school students cultivate the social and practical skills essential to entering the workforce. More than half of the organization’s paid staff are graduates of the program.

“I’ve opened up so many opportunities to the passions that I like,” Perez says of his decadelong journey with Outdoor Outreach. “I’m not really working a job; I’m with a big family.” He doesn’t think he would have had the gumption to try as many outdoor activities as he enjoys today had he not been introduced through the organization.

“What any really good youth development program is all about is providing safety for the kids,” says founder Chris Rutgers, who stepped down as head of Outdoor Outreach in 2013 to launch Transforming Youth Outdoors, a nonprofit, online resource that has provided training, webinars, and guides to funding for more than 2,000 restorative outdoor youth programs based in all 50 states and around the world.

When Rutgers initially developed the model for Outdoor Outreach, he said, few youth development programs of its kind existed. The reach of traditional scout programs is limited, and fee-based wilderness therapy programs have been known to pose emotional and physical dangers to kids who are often acting out for deeper reasons.

Rutgers says Outdoor Outreach is “choice-based, and you can choose to participate or not.” In his estimation, establishing bonds founded on genuine trust and support is tantamount to any behavioral shifts youth development programs may produce.

The 1998 Adverse Childhood Experiences study published in the American Journal of Preventative Medicine examined the long-term connection between traumatic childhood experiences and public health. It found that individuals exposed to abuse and household dysfunction as children were significantly more likely to exhibit risk factors for poor health in the adult years such as substance abuse, depression, and severe obesity.

These outcomes are what programs such as Outdoor Outreach are working to prevent. Rutgers is now working alongside neuroscientists to research how the effects of childhood trauma can be alleviated through outdoor exploration.

A 2017 study published in BioScience determined that the presence of even modest green spaces in a community is connected to better mental health and well-being. This is likely the result of an increased desire to partake in outdoor physical activity and socialization, in addition to feelings of mental restoration upon engaging with nature. Experiencing the outdoors has also been linked to improvements to attention deficits and stress levels in children.

Other programs, such as Austin-based youth development program Explore Austin, are also helping kids harness the benefits of spending time outside. Explore Austin combines long-term mentoring with outdoor exploration for students in grades six through 12. Kids must meet a need-based criteria to qualify for participation. According to Explore Austin’s most recent annual report, 283 participants received nearly 60,000 collective hours of mentorship in 2017 and logged more than 11,000 miles in summer wilderness trips.

For many participants, traveling with Explore Austin is the first time they’ve been on an airplane, let alone out of state. The program, which employs resources provided by Transforming Youth Outdoors, begins with an orientation for parents and participants and then hosts an introductory camping trip to get kids acquainted with the natural environment ahead of longer expeditions. But the time they spend outdoors is about more than just recreation, program director James Faerber says.

“While the kids learn a lot of outdoor skills, that’s not the primary thing we’re trying to instill in them,” Faerber said. “We’re trying to build grit, self-efficacy, and social capital, and outdoor adventure is a great tool to build those things.”