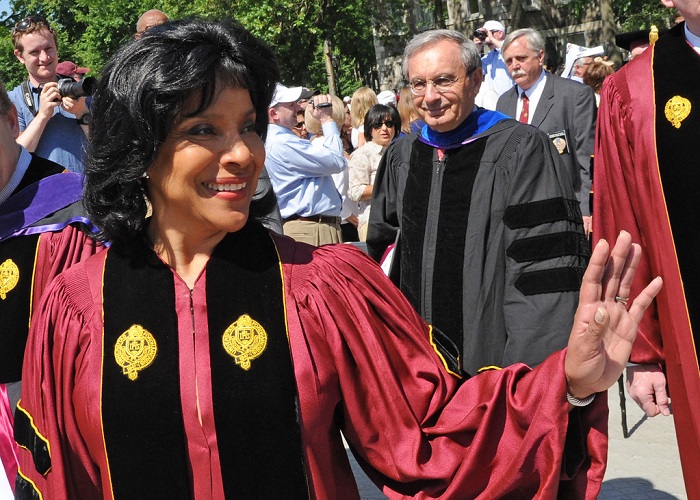 For acclaimed actor Phylicia Rashad, July 1, 2021 was the official first day on the job as dean of the College of Fine Arts at Howard University. But some hoped it would also be her last.

The day before, Rashad had sent out a controversial Tweet in support of her onetime “TV husband,” Bill Cosby, after a court overturned his sexual assault conviction. “FINALLY!!!!” Rashad wrote in the Tweet. “A terrible wrong is being righted — a miscarriage of justice is corrected!” This prompted critics and Howard students to call for her resignation.

Here, George Justice, an English professor and author of “How to Be a Dean,” offers insights on the controversy surrounding Rashad.

Does Phylicia Rashad have the credentials to be a dean?

Phylicia Rashad does not have the typical credentials of an academic dean. Most deans have served anywhere from 10 to 30 years as full-time faculty members. They also tend to have served as chair of their department or as an associate dean first.

But Rashad has a wealth of relevant professional experience, which can be as important as academic credentials for a school of fine arts.

Perhaps best known for her role on “The Cosby Show” as Clair Huxtable, Rashad’s Huxtable character was once voted in a poll as “TV mom closest to your own mom in spirit.” Rashad is also no stranger to college campuses. She has taught master classes at colleges and universities throughout the country. She also served as the first Denzel Washington Chair in Theatre at Fordham University.

The job description for her current role as dean calls for 15 years of progressively responsible experience in management as well as “political adeptness” and “good judgement.” It also calls for “excellent oral and communication skills,” the ability to “relate well to the college’s diverse constituencies,” and the “inclination to be a visible spokesperson for the college.”

It’s hard to square that with the controversy in which she finds herself enveloped as dean of Howard’s recently re-established College of Fine Arts. The college is to be named after Chadwick Boseman, the late “Black Panther” star who is also an alumnus of the school.

Does your book cover anything close to this controversy?

My book opens with the famed 2015 campus protests at the University of Missouri, where I taught from 2002-2013 and served as graduate dean from 2011-2013. In that instance, the deans teamed up to help oust the campus chancellor and university system president for what was seen as their weak response to student protests regarding racism on campus.

Since deans represent the academic aspirations – and integrity – of their faculty and students, they need to speak up on matters of grave importance to the colleges they oversee. Typically, when deans themselves create controversies, particularly those associated with race, gender, sexuality or religion, they resign or are fired.

For example, Sonya Duhe, the newly appointed journalism dean at my home institution – Arizona State University – was fired shortly after she accepted the position in 2020. Her undoing came after she Tweeted support for “the good police officers who keep us safe” on “#BlackOutTuesday” – a day of protest on June 2, 2020 that followed the police murder of George Floyd. The Tweet prompted scrutiny that led to revelations that she had been accused of demeaning students of color at her previous institution. Specifically, it was alleged that she would tell them their hair was too curly or their complexion was too dark for them to be “camera ready.” Duhe is reportedly suing Loyola and its campus newspaper for publishing a series of articles that portrayed her as racist.

In 2007, the University of California-Irvine withdrew an offer to have Erwin Chemerinsky serve as law dean. Chemerinsky wrote that the offer was rescinded after then-university chancellor Michael Drake told him he was “too politically controversial” for an op-ed he wrote criticizing a federal regulation for death row inmates.

And Ronald Sullivan, the first black faculty dean to preside over a dorm at Harvard, was fired as dean over his work as a lawyer on behalf of disgraced filmmaker Harvey Weinstein. Weinstein is currently serving 23 years in prison for rape and sexual assault. Sullivan retains his position as a tenured faculty member in the Harvard Law School.

Are there any other comparable cases?

Two recent cases that made national news are those of Dean June Chu at Yale, who was suspended and never resumed her position over writing Yelp reviews that suggested “white trash” would particularly like a certain restaurant. Dean Leslie Neal-Boylan of the University of Massachusetts-Lowell was fired, allegedly for an email stating “everyone’s life matters” – a variation of a slogan meant as a critique of the Black Lives Matter mantra – in the wake of the George Floyd murder.

Do deans have to play by a different set of social media rules?

Absolutely. Howard released a statement after Rashad’s supportive tweet of Cosby saying that “personal positions of University leadership do not reflect Howard University’s policies.” In my experience, that is a highly unusual statement and indicates deference to Rashad that might not be shown to other high-level administrators by their employers. Research has shown that college presidents use social media to bolster their institutions but are afraid of making mistakes.

After backlash to her Tweet, Rashad sent out another Tweet that stated: “I fully support survivors of sexual assault coming forward. My post was in no way intended to be insensitive to their truth.” Rashad also issued an apology on July 2 for her initial Cosby Tweet, but it has not been enough to assuage some of her critics.

Most deans and other university administrators that I follow have bland social media accounts. Their postings are mostly filled with praise for their institutions and self-praise for the great job they do with students, faculty and the community.

How does Title IX come into play here?

Title IX of the Educational Amendments of 1972 prohibits discrimination in American higher education. This includes sexual harassment and assault. Most universities, including Howard, employ Title IX administrators who advise campus leadership and conduct investigations on campus. Until 2020, federal law required leaders to be “mandatory reporters” who must pass along any information about possible incidents of harassment. Howard’s policy includes deans in the category of “responsible employees,” who are “expected” to report incidents to the Title IX office. Many of these incidents at universities relate to sexual matters among faculty and students, often with complicated power dynamics. As a “responsible employee,” and as leader of the School of Fine Arts, Rashad practically and symbolically represents the university’s compliance with Title IX. To her critics, her support of Cosby calls into question her ability to carry out that role.

This is a particularly important issue at Howard, where in 2016 students protested against the university’s perceived inaction over sexual assault on campus.

What factors will affect Rashad’s fate?

As my book describes, her role as dean will involve hiring faculty, attracting students and working with the community. This includes raising funds to support the work of her school and the university at large. Prior to the Cosby controversy, Rashad may have been well-positioned to do these things based on her experiences and stature. But amid calls for her ouster, it remains to be seen whether the strengths she brings to the position will outweigh this controversy.