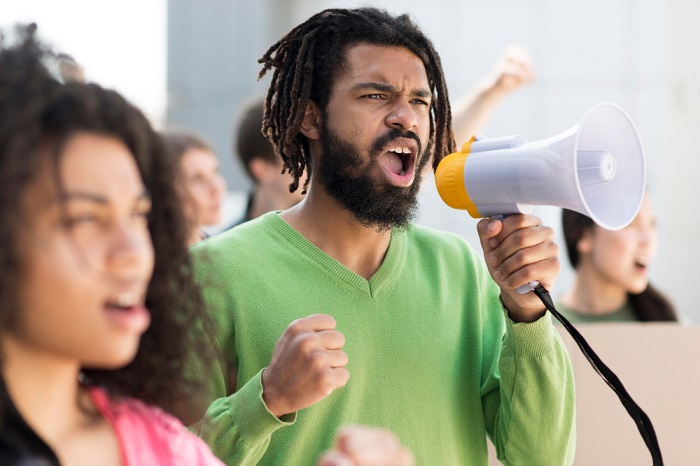 When you think of a protest, one that fills the streets, do you remember the visuals of what you saw? Visually striking images are often circulated by news media — like the one we’ve used for this article.

For me, sound has always resonated — it’s sometimes what I remember, long after the streets are empty and quiet again.

Maybe it’s the sound of a chant “No Justice No Peace” or “I Can’t Breathe” at a Black Lives Matter protest. Or a theatre shaking from feet stomping after a speech by a brown queer rights activist. I can still hear that. I also remember the sound of Toronto police horses clopping on concrete during the 1992 protest against police brutality.

Everyday sounds are important too. The normal sounds of a Saturday: music from a fruit stall, neighbours yelling “hey” to each other, the clattering of the Q train in Brooklyn. These sounds can define a neighbourhood. And if we don’t pay attention to them, as life changes, sounds can disappear.

In today’s episode of Don’t Call Me Resilient, I speak with two people involved in sound studies who believe sound is an element of resistance. They explain why — in our hyper-visualized age of Instagram-perfect photos — sound is so compelling and why soundscapes can help to amplify voices of resistance.

Nimalan Yoganathan is a PhD candidate at Concordia University. He studies protest tactics and he looks at how different sound practitioners have contributed to anti-racist movements.

I also spoke with Norman W. Long, a born-and-raised resident of the south side of Chicago. Norman is a sound artist, designer and composer who works to document and record the everyday reality of his community. He has graduate degrees in landscape architecture from Cornell University and in fine arts from the San Francisco Art Institute.

Both our guests talk about how important it is to listen to the sounds around us as a way to critically engage with our communities, to help bridge our deep divides and to pay attention to the forces of power in our environment. They say anyone can learn to listen deeply, even children.

As Long invites both insiders and outsider to listen on guided soundwalks of his community, he starts with a short breathing exercise. He said:

“The practise of breathing brought me back to COVID-19 and the murder of George Floyd. In both of these instances, African-Americans are more vulnerable to contract the virus and more likely to be murdered by police. There’s also the fact that most areas with high rates of air pollution and toxins are overwhelmingly poor and African-American. When we breathe, we are mindful of our mind-body connection, our connection to each other and our connection to those who cannot breathe. We can breathe for them and listen to the street, the noises and disruptions, and join in the chorus that demand justice for Black and brown people all over the world.”

This is a different kind of episode: instead of our usual interview style, we let the sound guide us. I encourage you to listen in and follow along with our conversation and playlist.

You can listen to or follow Don’t Call Me Resilient on Apple Podcasts, Google Podcasts, Spotify or wherever you listen to your favourite podcasts. We’d love to hear from you, including any ideas for future episodes. Join The Conversation on Twitter, Facebook, Instagram and TikTok and use #DontCallMeResilient.

Don’t Call Me Resilient is produced and hosted by Vinita Srivastava. The co-producer on this episode is Lygia Navarro. Haley Lewis is a series co-producer and Vaishnavi Dandekar is an assistant producer. Jennifer Moroz is our consulting producer. Lisa Varano is our audience development editor and Scott White is the CEO of the Conversation Canada. Don’t Call Me Resilient is a production of The Conversation Canada. This podcast was produced with a grant for Journalism Innovation from the Social Sciences and Humanities Research Council of Canada.