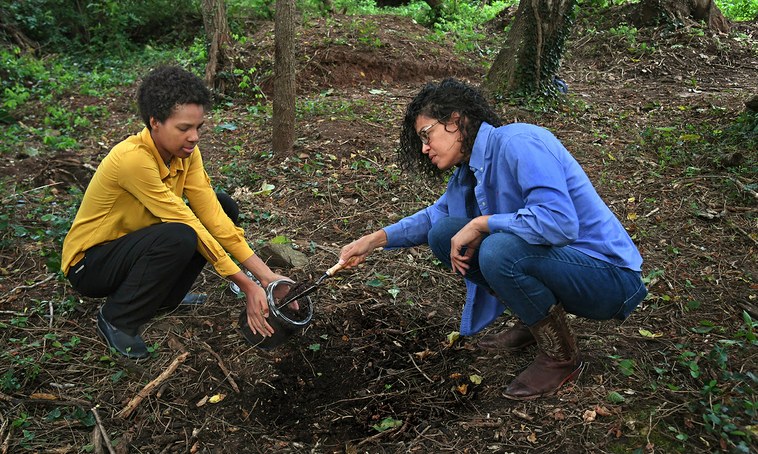 Remembering Our History of Racial Injustice Through Soil

In July 1898, a Black ice cream vendor by the name of John Henry James was accused of assaulting a White woman just west of Charlottesville, Virginia. He was dragged off a moving train by an angry mob, hanged from the branch of a locust tree near the train tracks, and shot multiple times. This past summer, 120 years later, John Henry James was taken on a pilgrimage from Charlottes­ville to the National Memorial for Peace and Justice and Legacy Museum in Montgomery, Alabama, which memorializes the victims of racial violence in the United States. James, symbolically represented by a jar filled with soil collected at the site of his lynching, was accompanied by about 100 members of a delegation of Charlottesville residents intent on ushering his allegorical remains to their final resting place. He would join others whose lives have been largely washed away from collective memory.

In opening the Legacy Museum and the National Memorial for Peace and Justice, the Equal Justice Initiative has documented the brutal lynchings of more than 4,400 African-descended people between 1877 and 1950. Many of them were in 12 Southern states, but more than 300 killings occurred in states outside of the South. This work is bolstered by the organization’s Community Remembrance Project, through which the Equal Justice Initiative has prompted people who live near the sites of lynching deaths to organize soil collection at those locations. The collection often includes a ceremony honoring the life lost and discussion about how a historical narrative addressing these atrocities might be spread more widely. In each community effort, a jar of earth is sent to the Legacy Museum in Montgomery, where it joins a growing collection of hundreds of jars of soil, each engraved with the name of a lynching victim (or marked as “unknown”) along with the date and location where the person was killed.

On the bus from Charlottesville that day was Jalane Schmidt, a professor of religious studies at the University of Virginia and one of the organizers of the soil collection and memorial service held in honor of James before the pilgrimage. She says the jar full of earth was more than rocks and dirt. “It really felt like an urn with ashes,” she says. James was “the most important passenger on the bus.”

Schmidt had spent the spring of 2018 collecting clues from newspaper archives that hinted at the site of James’ killing: “up the hill,” “near the blacksmith shop,” some “ twenty steps from the station.” Accompanied by another historian and an arborist, Schmidt compared this information with photographs to determine as accurately as possible the site of James’ death. Later, Schmidt gathered here with community interfaith leaders, the descendant of another lynching victim, a student organizer, and a few city officials, as if for a funeral. During the ceremony, three clergy members delivered a litany requesting that attendees continually “say his name,” as soil was scooped slowly into three glass jars etched with the words “John Henry James.” One of the jars would travel to the Equal Justice Initiative museum in Montgomery.

Throughout history, humans have used burial rituals to consecrate particular places. Mark Tebeau, an associate professor of public history at Arizona State University who has studied and developed tools to improve the telling of community histories, says organic material has been used to consecrate war memorials since the late 19th century. The involvement of soil in particular “turns [a site] into a grave, it makes it something that is clearly recognizable as sacred,” Tebeau says. This theme has re-emerged in the 21st century.

Tebeau is writing a book on the Cleveland Cultural Gardens, where a crypt is filled with soil collected from Turkey, Yugoslavia, Latvia, Lithuania, and 24 other countries in 1939 as a gesture of good faith during wartime. It has attracted renewed interest in recent years, including the depositing of soil samples from Croatia, Albania, and India.

The list of United States lynching victims is long, and soil collections and ceremonies in Tennessee, Alabama, Florida, and north of the Mason-Dixon line have drawn and involved hundreds of Black, Brown, and White people from a range of faiths and socioeconomic backgrounds. Josie Lemon Allen, chief operating officer of Bridge the Gap Coalition and organizer of soil ceremonies in Ocoee, Florida, says that is because “everybody is in need of healing from what happened in this country.” The soil varies from red and clay-filled here to sandy or rocky there. But there is an affinity among gatherings held at the site of each atrocity. Scooping soil in honor of a particular person “is what allows people to actualize that a life was lost,” Allen says.

The dirt was taken to the Legacy Museum in Montgomery, Alabama, where dirt samples from lynching sites across the country are on display. Each sample has the date of the lynching and the name of the victim. Photo by Ricky Carioti/Washington Post.

Karen Jones of Birmingham, Alabama, participated in a soil collection to memorialize the life of another lynching victim, Joe Thompson. Although Jones says having a traditional slab headstone would also have been sacred, using soil “was a greater memorial … just the reliving and the experience brought him back to life,” she says.

Soil has also been put to use in artwork that evokes the people or events it memorializes. Sita Kuratomi Bhaumik is an Oakland, California-based artist and activist whose installation at the Savannah College of Art and Design Museum of Art in Georgia commemorates the internment of Japanese Americans during World War II. Bhaumik’s work incorporates ashen soil from the Tule Lake Segregation Center in Newell, California, into a wallpaper pattern made from cyanotypes of some of the same kinds of bean plants Japanese American prisoners cultivated in the barren earth at Tule Lake.

Bhaumik says once she identified the medium she intended to work with, she called another Japanese American friend of hers, Mark Baugh-Sasaki, whose father was a prisoner at Tule Lake in the 1940s. As it turned out, Baugh-Sasaki already had 300 pounds of Tule Lake soil packed into buckets and suitcases at his home studio for an upcoming project, and he agreed to give some to Bhaumik.

The two were surprised by their overlapping, highly specific choice of materials. But it was not coincidence. “It’s not just soil,” Bhaumik says. “It’s because it’s so particular and because it’s so fine and this particular color … it is of that place.” She says the ashen soil also evokes descriptions of clouds of dust in the writings of those interned. “You couldn’t get away from it. It was in your ears, in your mouth, just this dust coming from everywhere,” she says. Bhaumik inadvertently produced a dust storm in securing soil on the walls and in the cases of the installation. Much like she had read in memoirs of Tule Lake prisoners, she says, the volcanic soil “came in through the cracks like ants.”

In Memphis, Tennessee, more than 500 people came together in May 2017 to mark the centennial of the death of Ell Persons. The Black woodcutter was lynched alongside the Wolf River a century earlier after being blamed for the death of a 16-year-old White girl named Antoinette Rappel. John Ashworth is executive director of the Lynching Sites Project of Memphis, the community group that organized Persons’ memorial. Ashworth says he has been involved in seven or eight soil ceremonies like this one, resulting in jars of earth sent to join the others in Montgomery, as if filled with remains.

After scooping soil from the banks of the Wolf River, community members, including descendants of Persons and Rappel, gathered around the pile of earth. “We try to allow for every person participating to come up and put a pinch of soil in [the jar] so they, in fact, have a part in the ceremony,” he says. “That in and of itself brings about a certain amount of feeling or connection.” It also aids in communication, in changing the narrative, Ashworth says.

“We did it in Alamo, we did it in Brownsville, we’ve done it a couple times in Memphis … it’s a very cathartic process.” Ashworth says using soil has made the work of interpersonal and historical reconciliation a little bit easier, and in the process given rise to “a renewed sense of each other’s humanity.”