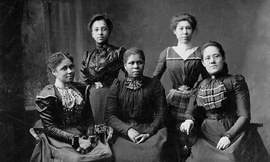 Have you heard of Rosetta Douglass Sprague?

I hadn’t. Then I came across a black-and-white photo on Instagram of a stately yet solemn-looking Black woman who lived during the 19th century that made me stop scrolling through my feed.

It’s Black History Month, and here’s an image of someone, although similar to those of which I’m familiar—Ida B. Wells, Phillis Wheatley, Sojourner Truth—I’d never seen.

As I read the post, I learned that she was the daughter of abolitionist Frederick Douglass. But she was also a trailblazer of U.S. history in her own right.

Although her name is rarely, if ever, mentioned, Sprague was a founding member the National Association of Colored Women, the largest federation of local Black women’s clubs.

That’s just one factoid I learned when I began following the IG account called Race Women, a social media project spotlighting generations of early Black feminists—“foremothers” such as Sprague, many of whom have gone unacknowledged.

Unveiled in January, Race Women could be one solution to increase people’s knowledge of Blacks in U.S. history—particularly early Black feminists—inside and outside of the classroom.

For centuries, Black history in K-12 education had been limited. But a 2017 article from the National Council for the Social Studies noted that since the 1960s, when several states “passed laws requiring or recommending that the contributions and achievements of minority groups be included in school curricula,” the presence of Black history taught in schools has improved.

Still, Dr. LaGarrett King, the article’s author noted, there is room for improvement and representation is not enough.

“At the moment, Black history knowledge required by the curriculum is often additive and superficial,” King wrote. “In many ways, we teach about Black history and not through it. The voices and experiences of Black people have often been silenced in favor of the dominant Eurocentric history curriculum.”

With the first post, Race Women creator Maya Millet shared the partial history of Pauline Hopkins, a writer who worked as a novelist, journalist, and playwright in the 1900s. Hopkins wrote about the work of other Black women then, in a similar way that Millet is doing with Race Women now.

Also, similarly, says Millet of the different generations of women, Black women and their stories are minimized if not altogether brushed aside. Yet these women have and continue to forge ahead.

“America, in a lot of ways, continues to be a hostile environment for Black women but particularly at that time, we have historically been undervalued,” Millet says. “We have historically been the most uncared for group and yet these women decided that they had to speak up for us, that they wanted to demand their freedoms for us, and they wanted to define freedom in their own terms.”

Prior to creating Race Women, Millet who is a producer and nonfiction writer and editor, was researching for another project. She kept coming across Black women  she’d never heard of. It initially shocked and angered her that it had taken so long for her to learn about them, she said.

In a more recent post, she uses a screenshot of a Lucille Clifton poem called the lost women. In it, Clifton writes, “all the women who could have known me, where in the world are their names?”

That piece resonated with Millet. And it encapsulates the reason she started Race Women, to share the histories of these unsung sheroes.

So far, Race Women has highlighted Gertrude Bustill Mossell, a journalist and author of The Work of the Afro-American Woman; and Maria Stewart, an abolitionist and lecturer who is known as being the first American woman to speak in public about racial and gender issues.

Millet says she decided to use Instagram because it’s where people are consuming content and is an accessible site. The medium also has few constraints, she says, as opposed to an article, book, or audio story that would limit the number of women who she could highlight—she wants to share about every Black feminist foremother that she can.

There seems to be an increasing use of social media in this way, with at least a handful of other Instagram accounts dedicated to Black people’s contributions to U.S. history, such as Black Women Radicals, Blvck Vrchives, and Vintage Black Glamour.

“When we have free tools like Instagram and [other] social media, which we use on a regular basis, we understand that information should not be something that’s behind a barrier,” says Ayofemi Kirby, manager of communications and publicity at the Schomburg Center for Research in Black Culture.

The Schomburg Center, which is part of the New York Public Library system and has more than 11 million items including books, paintings, and other artifacts from the African diaspora, also uses Instagram to share information.

“We make all of our programs and exhibitions and items accessible to the public, so no matter who you are, where you’re from, what your socioeconomic status is, you can access this material,” Kirby says. “That really is a core value, and I think that social media sort of operates in the same way.”

Had it not been for running across Race Women on my IG feed, it’s likely I would have not learned of Sprague, Hopkins, Mossell or Stewart. And it’s experiences like mine that Millet hoped for.

She wants Race Women to be a catalyst for people to learn more about Black women in history—their names and their stories.

“The whole point for me was that they had historically been looked over. People had consistently made choices against including them, against making them visible or seen,” Millet says, noting that she didn’t want to do that.

“The women on my list are women who’ve I’ve just come across in my research, but I know that there are more.”