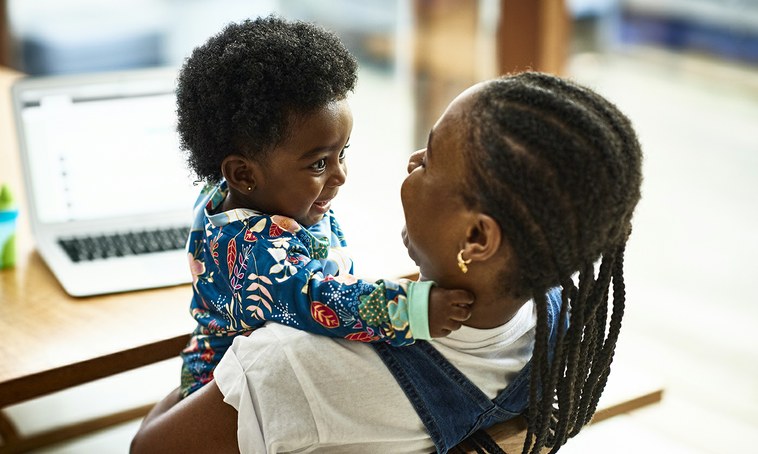 Every year during Women’s History Month we reflect on the many accomplishments of women and their contributions to society. Now that the month is over, it’s time to face a glaring omission so that it’s not repeated next March.

This year, I was particularly concerned that the month’s overfocus on the secular and professional accomplishments of women brought an unintended consequence to undermine mothering as valuable work equally worthy of high-fives, GIFs, reposting, and tweeting. Women’s History Month or any such celebration is not complete until women are honored for their productive work—and their reproductive work.

That means acknowledging work that’s unpaid yet makes a significant contribution to society via infant health, childhood development, education, and the general ongoing existence of the human race. Instead of celebrating mothering work as an important subset of women’s work, we find it cut out of women’s celebrations and relegated to one day in May—which has become so overrun with commercial interests, it’s hard to see the true issue.

This is a separating of women—of the different roles we play. Mother, wife, career person, lover, sister, daughter, friend. Instead of celebrating the complete woman, we are stuck parsing out the career woman—the woman who broke barriers against men and put her other selves aside for another time, another month.

Given the history of the suppression of women, it is absolutely important to document and note the ways we have overcome those struggles. But what about the roles that women uniquely play? Only celebrating our accomplishments in fields dominated by men and ignoring the mothering work women uniquely do feels decidedly antifeminist. If we are celebrating women, let’s celebrate the whole person—and all the roles women play in their lives.

Since about 80% of women become mothers in their lifetimes, we should be talking about the structural inconsistencies. For example, a woman who devotes her time to the work of mothering cannot earn Social Security benefits for that work, whereas if she has a paying job, she and her daycare earn credits toward financial security in old age. We should be talking about living in the only industrialized nation without a federal paid maternity leave, which would give women time to recover from birth and establish their maternal rhythms.

The continued devaluation of mothering as important work is built on an outdated system based on the idea that families can afford women not to work. Yet mothers are underpaid and undermined for their secular work and their maternal work.

The motherhood penalty known as the “maternal wall” has been found to be more of a problem than the glass ceiling. One study found that when subjects were given identical female resumes with one being a mother’s, the mother was 79% less likely to be hired, 100 percent less likely to be promoted, offered an average of $110,000 less in salary, and was held to higher standards of performance and punctuality.

Much of the feminism that began in the mid-20th century focused on fighting for equal rights with men and freeing women from the imperative to mother. Important work. But in our quest to be viewed as equal to men, we forgot to fight for the things that make us uniquely women—like our ability to birth and lactate. No one should be forced to mother, but women who choose that journey deserve political, social, and structural support. Otherwise, we are failing women.

If women don’t value mothering as important work, who will?

If women don’t value mothering as important work, who will?

In The Picture of Dorian Gray, Oscar Wilde wrote: “Nowadays people know the price of everything and the value of nothing.” In our society, items are priced. Accomplishments can be noted. But value remains an abstract and often misunderstood notion. Our idea of value is based on what somebody is willing to pay for something, and that leaves the modern valuation and celebration of mothering as valued work steeped in confusion. It is universally accepted that no one should work for free except a mother, yet no one has enough money to hire a good mom, which actually makes mothers priceless.

Being priceless and worthless at the same time is a terrible state of affairs. And the psychological impact of generations of undervalued mothers is hard to ignore. Many find a torrent of disappointment, fear, frustration, and anger at the beginning of their mothering journeys. Postpartum depression is on the rise. By some estimates, it affects 1 in 9 mothers in the United States.

The announcement in March of a new FDA-approved postpartum drug is an important development. But instead of a $34,000-per-treatment drug that requires 60 hours of in-hospital IV treatment, what about more support and validation for motherhood? What if mothering was valued with paid family leave along with postpartum home visits and high-quality affordable child care? And what if viewing mothering as women’s experience worthy of celebrating was a part of that support? When we are told that mothering doesn’t matter, the stress of being “productive” (because caring for yourself and your baby is not seen as “work”) as a new mother is exhausting, overwhelming, and anxiety-producing.

We need a new social construct, one where mothering and caregiving is properly conceptualized as real work rather than women being applauded just for their career accomplishments and mothers being relegated to an overpriced brunch on Mother’s Day. We can end some of the isolation of motherhood and dangerous separation of women’s selves. Let’s do better.

This article originally appeared on kimberlysealsallers.com. It has been edited for YES! Magazine.