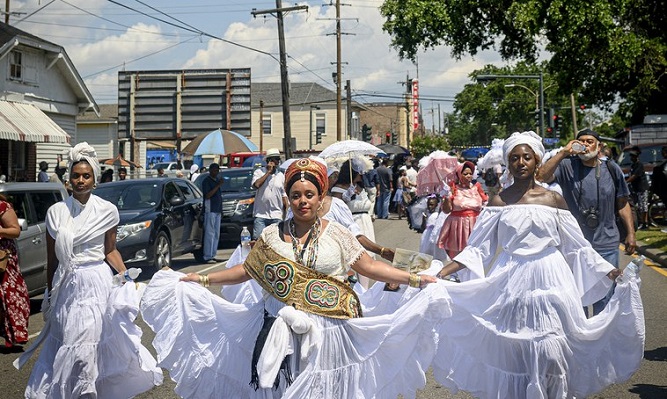 The City That Dances With Death

On a sweltering June evening, a crowd forms on the corner of Orleans Avenue and North Miro Street in the Tremé neighborhood of New Orleans. When the trumpets, tubas, and trombones lift up and wail, people start marching.

Men in white T-shirts drenched in sweat; women in hospital scrubs and housekeeping uniforms having just come from work; an 8-year-old with a bright orange shirt and a bleached blond flattop, armed with a tuba twice his height, move in tight steps to the rhythm of the brass band.

Handkerchiefs swing proudly in the air, doubling as sweat rags. The group makes it around the block and stops in front of a tan shotgun house where a man in a wheelchair uses his arms to raise his body in the air. He drops down and spins his chair, keeping pace with the beat of the song.

Amid the crowd is a sprinkling of matching T-shirts, red and black, with a pastel portrait of civil rights icon Leah Chase, the “Queen of Creole Cuisine,” printed front and center. To an outsider it might look like some kind of spirited birthday party for somebody’s grandmother. But people aren’t here because 96-year-old Chase made it once more around the sun. They’re here because she just died.

It’s called a second line. The term refers to dance steps as much as to a syncopated rhythm that originated on the streets of New Orleans, says Helen Regis, associate professor of geography and anthropology at Louisiana State University, in a 2001 article. More technically, she says in the article, “second line means the followers, or joiners, who fall in behind the ‘first line,’ composed of the brass band and the social club, which typically sponsors the parade.” It’s become an umbrella term for many kinds of parading in New Orleans.

Today, people are here to honor Chase’s memory and to celebrate her life. There may be an extra pinch of fanfare because of Chase’s legacy, but fundamentally this is how New Orleans deals with death.

Malik J.M. Walker is a chaplain and adjunct professor at New York University who has written on the theology of jazz funerals; he was also born in the New Orleans area. “The majority of people in New Orleans—especially Black folks—have had to encounter death and mortality in very specific ways, and it’s all around us,” he explains. “The city itself, the humidity kind of hangs deep with the scream of our ancestors.”

It’s one thing when an elder dies, he says, someone who has lived a long, full life, like Chase. “It’s another thing when you’re 16 years old and your friend is killed suddenly because of some dispute—being in the wrong place at the wrong time.”

Zulu members hold their hats as the celebrated Creole chef Leah Chase’s coffin is carried out of St. Peter Claver Catholic Church before making its way through the Treme neighborhood in New Orleans, June 10. Photo by Emily Kask/Redux.

This resonates with Trenice McMillian, who for 13 years has been making T-shirts with her husband—much like the memorial ones at Chase’s second line. The couple also makes life-size printouts of people that can be propped up to make it look like the person is standing.

The McMillians started doing it for birthdays. “But then somebody came and asked if we could do it for someone who had just passed away, and it just took off from there,” she says. People bring what she calls “life-sizes” to family reunions and weddings, to dance and take pictures with. Sometimes the deceased will show up in 2-D at their own repass.

McMillian’s business, Platinum Graphics, is in Central City, the neighborhood with the highest average of shootings per year in all of New Orleans, according to a 2015 crime analysis. New Orleans’ murder rate is eight times the national average.

“The city itself, the humidity kind of hangs deep with the scream of our ancestors.”

There are seasons to her business, she says. In the spring it’s mostly for graduations. In the summer, when school is out, there tends to be a rise in shootings here, as in many U.S. cities, so she’s mostly printing memorial products.

McMillian recalled four friends who once brought her a picture of their group. The friends kept bringing in that one picture to be printed on T-shirts and funeral programs when one of them was killed, “until they were all gone off of it.”

When the last one, Sadiki “Diki” Navarre was shot in 2013 at age 24, McMillian printed four to five life-sizes of Diki and about 300 shirts. “His funeral [and repass] were right up the street from the shop, but I refused to go,” she says. “It’s hard when you see them every birthday and every celebration, and then they all just get picked off.”

Memorials like Chase’s and Diki’s came about out of necessity. During Reconstruction, when a Black person died, there was no chance of getting any kind of memorial like those held for White New Orleanians, Walker says. So Black communities would hold a kind of “mock” state funeral, incorporating West African rhythms and syncretized dance. “We had to master the form and go beyond it,” he says.

Participants wear T-shirts with the likeness of the celebrated Creole chef Leah Chase during her jazz funeral in New Orleans, June 10. Photo by Emily Kask/Redux.

Since Hurricane Katrina in 2005, an influx of millennials flocking to the city has increasingly embraced this tradition. After a 28-year-old massage therapist was struck by lightning and killed in 2016, her friends organized a second line through the Marigny and Bywater neighborhoods. A second line planned for actor Carrie Fisher in 2017 by a mostly White, Star Wars-themed parade group spurred intense debate on social media about cultural appropriation, so much that the troupe dropped “second line” from the name of the event. Other lines planned for out-of-town celebrities like David Bowie and Prince have been met with both criticism and jubilee.

But Walker says second lines have been appropriated for decades. “We could talk about that being a slap to its origin, but at the same time, I believe that the generosity that [kind of] funeral teaches meant that we were not going to “patent” it,” he explains. “You have this society that functions on the basis of exclusion and folks that had to share for survival—from the [slave] ship onward.” Walker thinks that the instinct for openness and sharing applies to second lines, too: “But if you’re gonna actually play the music and walk the walk and dance the dance, you gotta learn that lesson.”

“If you’re gonna actually play the music and walk the walk and dance the dance, you gotta learn that lesson.”

It’s difficult to pinpoint exactly what that “lesson” is. But artist and parade leader Katrina Brees, originally of Massachusetts, may have learned it this past year. In June 2018, Brees’ mother, Donna Nathan, purchased a gun after Googling “gun stores” and then shot and killed herself under what is known as the “Tree of Life” in New Orleans City Park.

Brees has been in Louisiana since 2002, and her mom joined her two years later after separating with Brees’ father. Nathan loved dancing and music and costumes and art. “I think she got to be herself in New Orleans,” Brees explains. “Free in her spirit and her creativity and her humor.” But she also became an alcoholic here, where many bars are open 24/7 and you can drink in the street.

In her trauma, it didn’t take Brees long to decide on two things she could do. Within 48 hours, she started working toward a law that would give people like Nathan the option to ban themselves from ever purchasing a weapon by registering for a special list.

“It’s almost like the second line is your community just lifting you and forcing you to realize that you will have good times again.”

Her second action was fulfilling what she thinks may have been her mother’s last wish. Shortly before her death, Nathan had written “DANCE” on her Facebook page.

“It seemed like a command that it was time for us to [celebrate],” Brees says. She accompanied her mother’s ashes to Massachusetts for one funeral. “It was horrible. The only thing they really knew how to do when someone died was to roll lunch meat into platters,” she says.

Back in New Orleans, she planned a funeral at the Tree of Life. Friends blew bubbles; a group danced around the tree. They lit candles and burned incense. “Now when I think about her death, I think of this epically beautiful scene filled with so much love and support and energies and mother nature,” Brees explains.

Friends and family met back up at the Maple Leaf, a bar in uptown New Orleans. The Lagniappe Brass Band played and the crowd strutted down Oak Street, circling Nathan’s home and looping back to the bar where the party continued.

“It was probably a hundred degrees in July and that people would just stop what they were doing to show support …” Brees trails off. “There’s so much in that medicine. It’s almost like the second line is your community just lifting you and forcing you to realize that you will have good times again.

“You will feel love and joy and you’re not alone.”

The jazz funeral—which dates back to the late 1800s and the birth of jazz itself—remains a powerfully transcendent rite and a preferred way for Black New Orleanians to honor its revered dead. Photo by Emily Kask/Redux.

The night after Chase’s first second line, a crowd of about 300 is at it again—in her honor—parading down Orleans Avenue to the interstate. A brass band plays a slow dirge, and a group called the Baby Dolls steps along slowly, adorned with bright yellow, green, and purple silk dresses and matching parasols with feathers flying off all sides.

The traditional gospel tune “I’ll Fly Away” floats down the avenue above men carting coolers of soft drinks and beer. The same week, 23-year-old Nia Lassai is shot and killed just around the corner from where Diki’s funeral had been held. New Orleans music legend Dr. John dies of a heart attack. The people mourn and parade again and again. “If you listen very closely, there’s an intangible scream that’s going on constantly,” Walker points out. “Grief is just treated as a feature of life.”