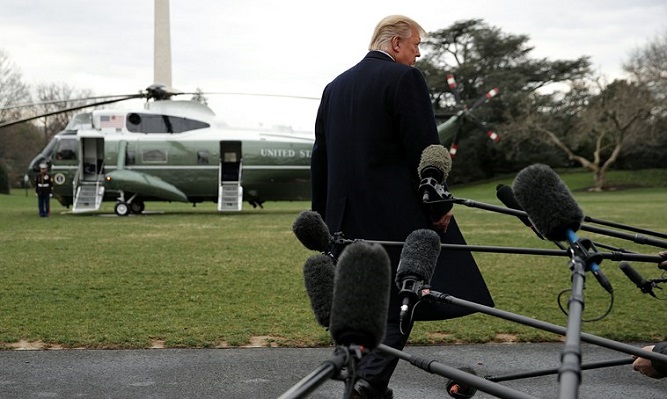 Over the past week, I’ve done a pretty good job of ignoring the trash that comes from U.S. President Donald Trump and his supporters. Even the comment telling four mostly U.S.-born congresswomen of color to “go back” to the “totally broken and crime infested places from which they came.”

I wish more people would do the same.

I mean c’mon. There’s nothing new here: Lots of White folks have been spouting such ignorance to Black and Brown folks since Reconstruction. And guess what? We’re still here!

We know Trump is an agent whose role and sole purpose is to further this nation’s particular brand of imperialist white supremacy capitalist patriarchy, while lining his and his family’s pockets. Although a dwindling minority of the population might wish to cling to this crumbling structure, more of us have the passion and drive to dismantle it.

As is our right.

As American racists increasingly make themselves known, often claiming to be “patriots” upholding the Constitution, I’m drawn to the most fundamental lines in the Declaration of Independence:

We hold these truths to be self-evident, that all men are created equal, that they are endowed by their Creator with certain unalienable Rights, that among these are Life, Liberty and the pursuit of Happiness. That to secure these rights, Governments are instituted among Men, deriving their just powers from the consent of the governed, That whenever any Form of Government becomes destructive of these ends, it is the Right of the People to alter or to abolish it, and to institute new Government, laying its foundation on such principles and organizing its powers in such form, as to them shall seem most likely to effect their Safety and Happiness.

Most folks focus on that first part: “We hold these truths to be self-evident, that all men are created equal, that they are endowed by their Creator with certain unalienable Rights, that among these are Life, Liberty and the pursuit of Happiness.” And stop there.

But there’s more. Baked into this nation’s founding is a remedy for exactly the kind of dangerous politicking currently oozing from the Oval Office. “That whenever any Form of Government becomes destructive of these ends, it is the Right of the People to alter or to abolish it, and to institute new Government, laying its foundation on such principles and organizing its powers in such form, as to them shall seem most likely to effect their Safety and Happiness.”

It is our right to abolish any government which fails to protect our safety and happiness.

The government’s powers are derived from the consent of the governed, and it is our right to abolish any government that fails to protect our safety and happiness. And while Trump’s screeds often target Black and Brown people in the U.S., we surely are not the only ones suffering.

Poor and working-class Whites, and even some middle and upper-middle class White people, have allowed themselves to become pawns in the game of race. Our current times have shown that they are nothing more than collateral damage.

Yet, many of those same White folks would rather defend and protect their whiteness to the death. They have bought into the construct of whiteness, to the point that they would rather let their loved ones suffer than do the work required to create a society that also benefits people who do not look like them.

There’s not much we can do about that. But if we’re going to survive, we, as a country, must meaningfully grapple with and repent for our atrocities.

We can start with the genocide of Native peoples and theft of their land, the enslavement of African people and the continued oppression of their descendants, and the internment of Japanese Americans, to name a few. While there may have been some attempts at correction (such as reparations for Japanese Americans), none has gone far enough to right these wrongs that persist to this day.

If we’re going to survive, we, as a country, must meaningfully grapple with and repent for our atrocities.

We don’t have to wait for Congressional consensus on reparations to begin addressing the harm being done right now. What we can do is not let the hatred take us off of our square. We can not allow those in power to distract us with petty, ignorant comments. We can demand the implementation of policies that punish those who call 911 on us for merely existing. We can call out—or call in—racism, sexism, and any other “ism” when we see it. We can hold those we know accountable for their foul behaviors. We can not just join, but be active in programs, groups, and organizations that have anti-racist, anti-sexist, anti-classist visions and missions.

And we can vote! Not only with the aim of voting out Trump, but voting for radical, systemic change.

I don’t agree that the sole goal of the 2020 election should be to “get rid of Trump.” We should also be focused on electing a candidate who is not afraid to listen to the people and institute a new form of government. One that cares enough about all its citizens and visitors who live within its borders to:

1. Apologize for the harm that has been exacted on Black and Brown people in this country.

2. Institute polices that help to repair that harm.

3. End mass incarceration and all its facets and components, including militarization of law enforcement, surveillance of Black and Brown communities, cash bail, and so much more.

4. Forgive student loans for those whose income is below a certain amount.

5. Enact effective climate change policies that work to correct the toll of environmental racism on low-income neighborhoods and communities of color.

7. Make housing affordable, and work to provide housing first to those experiencing homelessness.

8. Stop waging and supporting wars on and in poor countries for our own selfish and climate-destroying desires.

9. Abolish the Electoral College, which was created in part to protect the political influence of slave states.

We cannot hold our collective breath and pray that the “right” candidate emerges. We can do so much more. We get to say who that candidate is—if we vote! For we are the People, “the governed,” from whom government derives its powers. And when the government that was created by and for the people fails to serve its people, we the people have the right to remove that government.