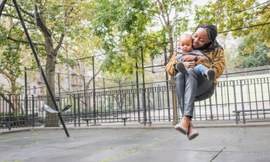 Ebony, a single mother of three, works two jobs to make ends meet and takes in around $11,000 a year. In addition to a part-time job at a beauty supply chain, she works as a communication specialist at a Jackson, Mississippi, nonprofit, a temporary position that could end in December.

She’s hoping her employers will keep her on, and she’s doing all she can to inspire them, including showing up for work an hour early.

“I want to make a good impression,” she says about showing up to work early. “It would be great if [the employers] tell me, ‘You worked so hard, how about you go ahead and stay with us?’”

Staying on could mean that Ebony’s annual income could double next year if she’s selected to participate in an upcoming guaranteed basic income pilot project for low-income single Black mothers in Jackson.

The project, the Magnolia Mother’s Trust, will award 16 low-income single Black mothers with $1,000 a month for a year. No restrictions will be made on how the money is spent. They will be selected through a lottery drawing in November, with disbursements beginning in December. Every qualified mother who applies will be entered. Names will be drawn from a hat.

The Mother’s Trust is an alternative or supplement to failing and conditional welfare systems that place restrictions on recipients and take away benefits the moment they begin to make strides.

One such example is Mississippi’s Work First program that forced primarily African American mothers to abandon education programs to work low-wage jobs if they wanted to receive needed cash assistance. That program failed in the ’90s.

Such conditions leave little room for single Black mothers to create opportunities for themselves, says Aisha Nyandoro, executive director of Springboard to Opportunities, the organization spearheading the project.

“The Magnolia Mother’s Trust is about addressing some of the economic, social, and racial inequalities that we know occur within these communities,” Nyandoro says. “And we’re looking to find solutions to stop the cycle of poverty.”

She adds that the Magnolia Trust is a cushion that allows women to pursue other ways of improving their lives (such as getting an education or starting a business), knowing that they can depend on the $1,000 a month for the year.

The Magnolia Mothers Trust is the first of its kind that specifically targets single Black mothers.

Springboard to Opportunities, a nonprofit resource connector for families living in affordable housing in Washington, D.C., Mississippi, Alabama, and Maryland, surveyed single mothers in Jackson and found that an overwhelming majority expressed a need for more cash.

Although other guaranteed income programs exist, the Magnolia Mother’s Trust is the first of its kind that specifically targets single Black mothers. And while money for the program was raised through the Economic Security Project, a network that funds unconditional cash and basic income projects in the United States, the mothers themselves play a central role in crafting the program.

Ebony was part of a task force that Nyandoro developed to help set the program parameters, including determining the stipend amount and the length of the program. The women, who are potential participants, were instrumental in adding complementary pieces such as leadership training and community service components aimed at helping them stay connected to and supportive of one another.

They also developed an in-house counseling service for the program. Kira Johnson, a licensed clinical social worker who will counsel the women, says her services will include individual, relationship, and family counseling.

Women living in poverty are more likely to develop mental health problems than their male counterparts.

Researchers have drawn a connection between poverty and mental health and found that women living in poverty were more likely to develop mental health problems than their male counterparts. And children growing up in poverty have fewer friends and higher levels of anti-social behavior, such as bullying, than children from more advantaged households.

“Usually, there would be an issue that comes up—whether it’s housing, relationship, anxiety, stress and/or depression. My job is to help them navigate through that issue.”

Johnson says she’s looking to convene monthly group sessions with the women but will hold individual sessions whenever needed.

Because the program carries no conditions outside of income, the mothers will not be required to participate in the counseling services, leadership training, or community service.

Is guaranteed income the answer?

The guaranteed income model is not new. In fact, the model has gained support from the likes of U.S. Sen. Bernie Sanders and former President Barack Obama, among other politicians, and some tech giants such as Mark Zuckerberg and Elon Musk.

During his speech at the Nelson Mandela annual lecture in South Africa in July, Obama touted guaranteed income as an option to reduce “yawning disparities” in wealth, education, and security across different socioeconomic groups.

The Stockton Economic Empowerment Demonstration, also supported by the Economic Security Project, will begin providing about 100 residents in Stockton, California, with a guaranteed income of $500 per month for 18 months in 2019.

And Chicago is floating an idea implementing a universal basic income project.

Alaska has had some success. The Alaska Permanent Fund, a $60.1 billion state fund that collects revenue from Alaska’s oil and mineral leases, has disbursed checks to Alaskans every year since 1982. At its peak, checks were up to $2,072 per person, or $8,288 for a family of four.

This year, researchers from the University of Chicago and the University of Pennsylvania released a case study of the Alaska project to test the theory of whether guaranteed basic income is the answer. They specifically examined residents’ workforce participation before and after the project and found no change on full-time employment and that the share of Alaskans who worked part-time jobs increased by 17 percent.

But these projects also face skepticism—and sometimes outright opposition—from politicians and pundits who dismiss them as disincentives to work. Former Vice President Joe Biden opposed the idea, calling back to his father’s position that a job “is about a lot more than a paycheck. It’s about dignity and respect.”

In April, Finland announced that it planned to end its two-year guaranteed income program, which pays 2,000 unemployed people $675 a month. When the announcement was made, Stuart Varney, a host for Fox Business Network, applauded the decision and said on-air, “You want money, get out there and work for it, please.”

If selected in the lottery, Ebony says, she will keep working, just as she has been doing since her youth. As a child, she worked for many of her father’s startup businesses: a T-shirt printing company, a car wash service, and a barbershop.

For her and many single Black mothers, the lack of motivation to get a job isn’t the problem. It’s finding one that pays a livable wage.

The median wage for all full-time year-round working Black women is just around $26,000, a recent report by the Institute for Women’s Policy Research and the Mississippi Women’s Foundation found.

This is why Saadia McConville of the Economic Security Project says guaranteed income projects are necessary.

“We don’t think it’s the silver bullet, but I think it’s a part of what we consider as we figure out a 21st century solution,” McConville says.

The project is starting with only 16 families to see what works and what doesn’t, and Nyandoro plans to explore sustainable models to expand it later.

“But right now, the project is about changing the narrative and dispelling the myth of the Welfare Queen and allowing African American women to show what is possible when we trust low-income individuals,” she says. “When we research the data, I truly do believe that’ll show how families have grown over the course of the year.”