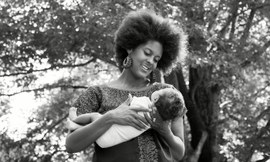 The History and Political Power of Black Motherhood

From them I learned what I wanted to do—and what I didn’t want to do. I made mistakes. But looking back, I realize I worked at it—hard.

I find labels like, “stay-at-home mom,” “homemaker” “housewife” and “single mom” disparaging; there’s something even backhandedly condescending about “working mother.” Neither describes the actual value of mothering—particularly as a Black mother.

That’s why I was so excited to read Dani McClain’s new book, We Live for the We: The Political Power of Black Motherhood. I imagine that if the What to Expect series was written by Black mothers, it would in some way include the questions McClain raises and potential solutions to problems Black mothers face, which she explores in the stories of the mothers she interviewed for the book.

In We Live for the We, McClain, a journalist who’s written extensively on race, reproductive health and activism, normalizes Black motherhood by referencing the body of works from other women authors such as Patricia Hills Collins or Alexis Pauline Gumbs, women elders, friends and organizers with whom she’s built community, and the women in her own family.

She gives a historical account of the trajectory of Black women and mothers in this country without pathologizing our experiences. And through the stories of the mothers in the book, she offers solace and wisdom, as she begins her own journey into motherhood.

I recently sat down to chat with McClain while she was in Detroit for her book tour.

Our conversation has been edited for clarity and length.

Jeffries Warfield: The subtitle of the book is “The Political Power of Black Motherhood” How would you explain what that is exactly?

McClain: We have centuries of experience trying to build family and support family and support our children in a place that’s often inhospitable. My intention with the book was to get a little more explicit about what that looks like and what our strategies have been.

Are there other mothers from marginalized groups who could tell a story about navigating an inhospitable terrain? Absolutely. To be a Muslim mother right now, to be a refugee mother right now, to be an Indigenous mother. There are so many groups who have their own stories of struggle and mothering, who are considering love and compassion and health and safety for their families, despite a broader social context that makes that difficult.

I wanted to unpack some of the language that we hear in the public discourse and tell stories about Black mothering.

But I’m Black and I’m a woman and I’m a mom, and I wanted to tell a story about us. And I was interested in looking at the ways that we’ve worked on these strategies.

I also think that it’s an interesting time because Black women are being talked about within an electoral political context as the saviors of the Democratic Party. That we’re the most reliable Democratic voting bloc. That we ourselves not only vote Democrat but that we’re organizers in our communities and turn out our family members to the polls.

So there’re these ways that in mainstream political discourse in recent years that Black women are being heralded as these superwomen (like #listentoblackwomen and #trustblackwomen) and I wanted to get underneath that a little bit. Like, why do we so consistently vote Democrat? Not to say that the Democrats are our saviors at all.

And I also wanted to puncture this idea that we are superwomen. [I recently had] this conversation about mental health and how do we take care of ourselves beyond the kind of self-care talk. What does it look like to be struggling with the pressures of raising children as a Black person in this country? How do we not lose it? And when we do lose it, how do we come back?

We talk in these broad terms about the physiological impact of the Black experience to our maternal health: our cortisol levels are sky high, how our bodies are impacted by the stress that we carry. That’s real, and I’m interested in a conversation about how we manage that. I’m not interested in these kind of broad strokes about how we’re superwomen and we’re here to save the rest of this country. So my effort with the book, in terms of the political power of Black motherhood, I just wanted to unpack some of the language that we hear in the public discourse and tell stories about Black mothering.

Jeffries Warfield: For you, finding a community for your daughter that uplifts your values is important. Can you speak to how mothers, particularly young mothers, can do that while trying to navigate environments that aren’t aligned with their own values?

McClain: I’m not a young mom, I’ll be 41 next month. I’ve been connected to social justice movements for 20 years now, and I struggle with the same issue in part because I live in my hometown, which is not where I have very strong political community.

Some people I interviewed were like, “You just have to figure it out, good luck!” Not in a dismissive way, but more like, you just have to put in the time it takes to build relationships with people. [One elder in Cincinnati said], “You look around to cities where you see the types of things happening that you want happening where you live. If there’s a Black play happening in Chicago or Detroit, you know, how do we get it here?”

I really appreciated her lack of coddling. It was like, our children’s lives depend on that [seeing positive images of themselves]. You have to figure it out. You have to find the community that’s going to support you so that you can be the best parent you can be, and that’s going to see your children for who they are and help them find their own self-assurance and dignity.

A society that makes it complicated for us to figure out how to talk about sex with our kids and keep our children’s bodies safe, that’s everybody’s problem.

Jeffries Warfield: You’re co-parenting with Isobel’s dad, and you mention him throughout the book. What would you hope fathers would get from it? Also, though written by a Black mother about Black motherhood, the book is for all readers. What would you want non-Black mothers/women to glean from your book?

McClain: I hope dads can see themselves reflected in the stories I’m sharing. And I hope that they find it useful and can apply the lessons in their lives and families as well. I hope Black parents read this book together.

[And] I think we’re in a moment where this word “woke” is a thing that people across lines of race and ethnicity aspire to. … I think there are a lot of people, regardless of race, who are really interested in the political leadership and social leadership of Black women. Maybe I’m being too optimistic, but I think that’s right.

I also think that segregated schools are everybody’s problem. A society that makes it complicated for us to figure out how to talk about sex with our kids and keep our children’s bodies safe, that’s everybody’s problem. Figuring out, especially if we were raised in a spiritual or religious tradition that no longer really speaks to us, how to give our children a sense of the divine or sacred. I think people who are White, Asian American, Latina/o, or Black, but not African American, everyone is interested in these questions. And so my hope is that people will read this book and see the stories [that] the people who I interviewed share and understand the universality of a lot of what they’re talking about.

Jeffries Warfield: Finally, what does it mean to “live for the we?” And to the question you ask in the book, how do we do that while also protecting our children?

McClain: The book’s title comes from a conversation that I had with Cat Brooks, who’s an organizer in Oakland. She does a lot of work with families of people who have been targeted by state violence, people whose children have been killed by police; she ran for mayor of Oakland in the last cycle.

We were having a conversation about her experience raising her daughter. At the time her daughter was 12, and she was saying that so much of their family life is connected to Cat’s work: going to rallies and community meetings.

[Cat] said that sometimes her daughter gets kind of frustrated. “Why can’t we be like these other families?” And Cat told her, “We don’t live for the I, we live for the we.” And when she said that, that was like an affirmation of what I’d heard from other mothers in other interviews, and had also read in the Black motherhood literature. This idea that as Black mothers we tend to not only be focused on solving problems for our children and our individual families, but we understand that when we see a problem that our children are facing—a problem at school or we’re having trouble getting them adequate health care or there’s not a playground on the block—we know that this isn’t just something that’s a problem for our family. We understand that there’s a solution that benefits a broader community and a broader family.

[And], Monifa Bandele, one of the few people I interviewed who grew up around political work, speaks to her experience of growing up in the ’70s and ’80s in a family engaged in [liberation movements]. She said that her experience was a good experience, she has fond memories, but that she had peers who felt traumatized or who are still grappling with what it meant to grow up in families that were so engaged in political work. So she and her husband [deliberately] make sure their children understand they come first and that the work of the movement is never more important than them.

I really appreciated her perspective around the considerations that we have to make to be sure our children are being exposed to our values but also never feel like they’re not a priority.