This week, media mogul, Byron Allen, broke the internet with a viral interview on The Breakfast Club. The CEO of Entertainment Studios dropped numerous gems for success and told his incredible story of building an empire from his kitchen table.

That hard work has paid off, as this Tuesday, Allen was inducted into the 2019 Broadcasting and Cable Hall of Fame.

Allen doesn’t mince words: Black people may have been “blackballed” from the day they were born, but they can still succeed. He tells young entrepreneurs not to be afraid to speak out and dream big.

“You cannot live in fear. You were born Blackballed. You know you’ve been positioned to fail and you have to recognize where you are.”

These are five other gems from Allen’s interview that remind us to pursue our greatness and know our true potential.

1. Open your own doors to your dreams.

So many young entrepreneurs just want to know: “How do I get my foot in the door?” Who can I talk to, where can I work, or what can I do to get me in the right rooms. If you follow in the footsteps of Byron Allen, you’ll realize that the door might take an extra push.

Allen’s passion for entertainment stemmed from his mother, Carolyn Folks. With a 7-year-old Byron in tow, Folks moved to Los Angeles, the entertainment capital of the U.S., to pursue a Master’s in Cinema TV Production from UCLA. After being turned away from a full-time position at NBC, she created her very own internship program at the esteemed broadcasting company by merely asking.

“She asked a question that changed our lives,” Allen told hosts Charlamagne Tha God, Angela Yee, and DJ Envy. “She asked, ‘Do you have an internship?’ And they said, ‘No.’ And then she went to the next question. ‘Will you start one with me?’ And they said ‘Yes.’.”

During her internship and afterward, Young Byron followed his mother to work every day, bouncing between the sets of legendary shows like The Tonight Show with Johnny Carson and Sanford and Son.

“I just went from studio to studio to studio, and I thought, what a wonderful way to go through life, making people laugh, making television and entertaining the world,” says Allen.

“This is what I’m gonna do with my life. And all of that is because of education. My mother is getting in there and opening that door.”

If getting money is your goal as an entrepreneur, then don’t sweat it. Sweat for it.

“Money is easy. Don’t be afraid of money. Let money love you. Money will always be with you. There’s plenty of money.”

Allen learned about money early on out of necessity.

“Money was really tight. And that clicked with me as a kid. So I started figuring out how to make money early on,” he says.

“Money is there for you. And you can make all that and more,” Allen told the Breakfast Club hosts.

Getting in the right mindset can propel you in the right direction. Thoughts lead to ideas that inspire action. But of course, your mindset means nothing, unless you follow Allen’s next tip. 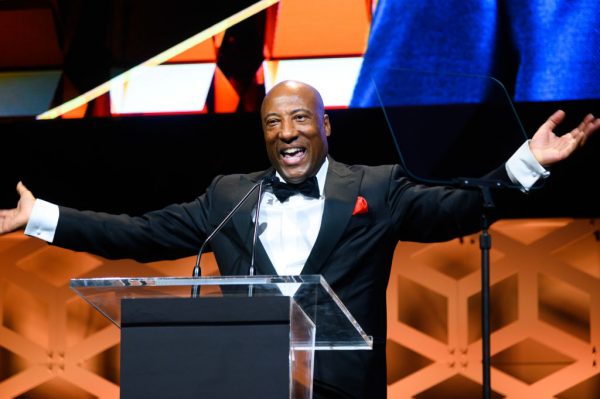 If you want to start a business, get comfortable hearing the word “no.”

In 1993, while trying to get ‘Entertainers with Byron Allen‘ on-air, Allen heard ‘no’ from about 1,300 television stations.

“On average, they all told me no about 50 times,” Allen remembers. “And literally, I sat in my dining room table from sunup to sundown, and I got about 15,000 no’s. And after a year of doing that, I was able to squeeze out about one hundred and fifty yeses. And I got a TV station in every market from New York to Waterloo Island.”

Allen would go on to build Entertainment Studios, one of the largest independent producers of TV and film, with hit movies like “47 Meters Down,” a shark film that grossed $62.6 million dollars worldwide, and only had a budget of $5.5 million dollars.

“I didn’t have two nickels to rub together, and I decided I’m going forward,” Allen recalls about his early days. “And I went forward. I didn’t know how I was gonna get it done, but Martin Luther King, like he said, that’s faith…”

You should never let your age hold you back, whether you think you’re “too young” or “too old.” Allen got his start at only 14 years old, doing comedy routines in Los Angeles.

“I started when I was a kid because I was watching Redd Foxx and Johnny Carson and all of these comedians, and I said, ‘You know what, I’m going to start doing stand up,’” remembers Allen.

“Then a guy saw me, a terrific guy named Wayne Klein. He saw me. And he said, ‘Who wrote those jokes?’ I said, I did. He said, I know somebody might be interested in writing with you. I said I gave my phone number, and I got a call like a week or two later. And this guy calls me up. He says, ‘let me speak to Byron.’”

That “guy” was Jimmie Walker, from the classic American sitcom, ‘Good Times.’ He goes, “My man, Wayne Klein, says you’re funny. So if my man Wayne Klein says, you funny, you must be funny. You want to come, write some jokes with us?”…So I start writing jokes with Jimmie J.J. Walker and went to his apartment. I was 14 years old.”

Allen would go on to be the youngest comedian to perform on the Johnny Carson show, a gig he first turned down so he could finish high school.

5. Pull up (at least) two chairs when you take a seat at the table.

Everyone deserves equal access to capital, but so often, black communities and businesses are not given a fair shot. When this happens, we need to turn to each other before anyone else. Understanding that most companies are started with bank loans, Allen approached President Barack Obama with one request: audit the banks.

“I said, ‘I’m not any different than anybody else. I have an agenda. My agenda is that I want for all Americans to have equal access to capital and opportunity, especially African-Americans, the furthest left behind.’ So I said, ‘You just spent 700 billion dollars to bail out the banks. And I want you to audit the banks and see if they’re lending money to Black people.’”

Allen’s principle of advocacy is one that applies in any arena. Whether holding politicians accountable or climbing the corporate ladder: once you take your seat at the table, remember to make room for someone else.