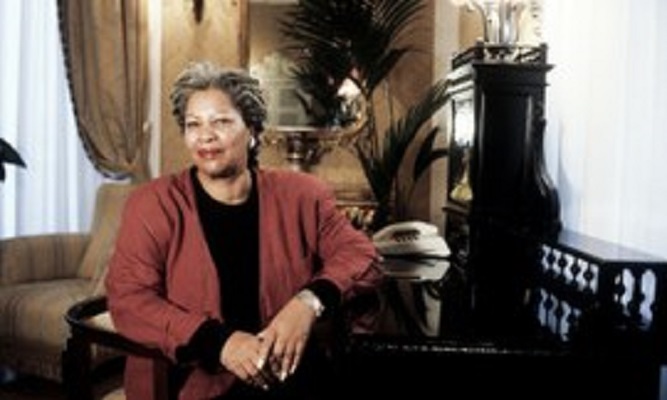 Toni Morrison on the Necessity of Literature

It was a tough week to lose Toni Morrison, one of America’s most esteemed writers and public figures. She died August 5, after a weekend of mass shootings, one clearly motivated by White nationalism. A few days later, ICE arrested 680 people in mass raids on Mississippi factories, an escalation of policies that intentionally inflict trauma on immigrant and refugee families.

Those events were enabled by American racism. That racism is a foundational reality of our nation, both in our history and present society, was a theme that Morrison, a Black woman, tackled in her writing for five decades. Her novels focus on the African American experience, depicting deep suffering but also struggle and hope. Their form, imagery, and use of language enthrall. Always, they convey the writer’s deep love for the Black characters and communities at the center of her stories.

For many, remembering Morrison in the weeks after her death meant turning back to her most famous book, Beloved, a harrowing but transcendent novel about slavery and its aftermath. There couldn’t be a more appropriate time to read it. This month marks 400 years since the first ship bearing enslaved people arrived in Virginia, the beginning of slavery in the American colonies. That anniversary prompted a much-needed national reassessment of slavery and racism, ignited by prominent Black writers in the New York Times as the 1619 Project. They rightly make a case for re-framing slavery and the African American struggle for equality as central to creating the United States as we know it. While the 1619 Project is being read, discussed, and criticized, Beloved is proof of the power of literature to evoke moral understanding. The novel’s characters, formerly enslaved people attempting to put together lives and identities in the years after the Civil War, are literally haunted by the trauma of slavery. As in all the world’s great stories, they must reckon with the past before they can survive in the present.

When Beloved was first published in 1987, American literature had seen nothing quite like it. Until that point, much American fiction, whether for or against, told the story of slavery from a White perspective, or one that at least somewhat skirted the full horrors of the institution.

Beloved was groundbreaking in its concern with the interior lives of enslaved and formerly enslaved people, their thoughts and perceptions, their psychological and spiritual resistance. Morrison makes the people at the center of slavery real and present for the reader, in the process making the past real, too. It is a revolutionary work that challenges received history.

In “On Beloved,” an essay about conceptualizing the novel, Morrison wrote, “I was keenly aware of erasures and absences and silences in the written history available to me—silences that I took for censure. History, it seemed, was about them. And if I or someone representative of myself ever were mentioned in fiction, it was usually something I wished I had skipped. …To me the enforced or chosen silence, the way history was written, controlled and shaped the national discourse.”

The Source of Self-Regard, published earlier this year, contains that essay and others that provide insight into the intentions and strategies that went into Morrison’s acclaimed fiction. It’s a selection from Morrison’s public commentary: essays, lectures, meditations, and thoughts on significant occasions such as her acceptance of the Nobel Prize in Literature. The pieces convey Morrison’s deep understanding of history—and power—and remind us of the phenomenal discernment she brought to her work.

As a scholar and literary editor, Morrison knew what she was taking on when she began writing fiction in the 1960s. Like the writers of the 1619 Project, she intentionally set out to correct the denials and mythologies of American society. In fiction, that means challenging the literary establishment that determines whose writing is published, distributed, and celebrated. It means challenging what we are told is artistically valid and meaningful—the literary canon.

In the way literature is created, the idea of a country is created, writes Morrison in “Black Matter(s)” an essay/lecture from Self-Regard: “Canon building is empire building. Canon defense is national defense. Canon debate, whatever the terrain, nature, and range (of criticism, of history, of the history of knowledge, of the definition of language, the universality of aesthetic principles, the sociology of art, the humanistic imagination), is the clash of cultures. And all of the interests are vested.”

Despite its breathtaking originality, Beloved was passed over for the National Book Award when it was published, prompting 48 Black authors to write an open letter on Morrison’s behalf, pointing out that it was high time world-class writers such as Morrison and James Baldwin received major awards in their own country. Beloved eventually got a Pulitzer—and now, 30 years later, it is accepted as one of the classics of American literature. Morrison, like the writers and editors behind the 1619 Project, championed the development of moral imagination by pushing beyond what vested interests usually allow.

In another essay from Self-Regard, “Literature and Public Life,” Morrison describes why that pushing matters. (A contemporary reader might add, “especially in times like these.”) “Literature has features that make it possible to experience the public without coercion and without submission. Literature refuses and disrupts passive or controlled consumption of the spectacle designed to nationalize identity in order to sell us products. Literature allows us—no, demands of us—to experience ourselves as multidimensional persons. And in so doing is far more necessary than it has ever been.”