The president’s comments were ill-informed at best and racist at worst, relatives of lynching victims say.

Willie Edwards Jr, a black truck driver, was killed by Ku Klux Klansmen who forced him to jump off a bridge in Alabama in 1957.

Two years earlier, white men bludgeoned black teenager Emmett Till to death in Mississippi. No one went to prison for either slaying.

Both people died in racist lynchings and relatives of each were aghast on Tuesday after President Donald Trump compared his own possible impeachment to lynching – racist killings, often to incite terror, that took an estimated 4,400 black lives over roughly seven decades in 20 states, mostly in the south.

Made in a tweet that drew backing from some Republican supporters including Senator Lindsey Graham of South Carolina, Trump’s claim was ill-informed at best and racist at worst, they said.

And it denigrated the fates of people who were hanged, beaten, shot, drowned, burned or battered to death because of the colour of their skin, they said.

Deborah Watts, a cousin of Till, called the president’s tweet “insensitive and offensive”.

“Lynching is the ultimate act of racial terror that resulted in the brutal murders, trauma and terrorism that my cousin Emmett and thousands of innocent black men, women and entire communities of colour suffered for hundreds of years,” she said.

Till, a 14-year-old African American from Chicago, was kidnapped, beaten and dumped in a river in 1955 after being accused of whistling at a white woman in a store. An all-white jury acquitted two white men of murder charges, although they later admitted the killing in a magazine interview. The FBI has yet to close a renewed investigation into his slaying.

In the case of Edwards’ father, Klansmen killed the 24-year-old man after mistaking him for another black man who supposedly smiled at a white woman or made a pass in racially segregated Montgomery. An FBI review found the killers kidnapped him off a roadside and forced him to plunge off a bridge into a river.

Three men were indicted in Edwards’ slaying in 1976, but a judge dismissed the case because the indictment did not state a cause of death. Subsequent investigations led to no prosecutions, and all the suspects are now dead. 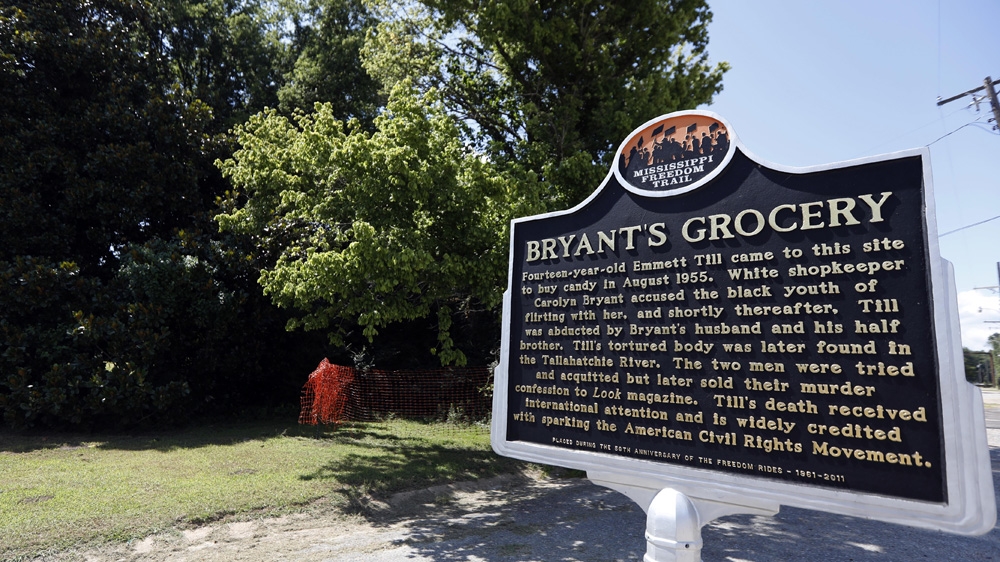 Till was kidnapped, beaten and dumped in a river in 1955 after being accused of whistling at a white woman [File: Rogelio V Solis/AP]

The names of Edwards and Till are included on a national memorial to lynching victims that opened last year in Montgomery.

Research by the nonprofit Equal Justice Initiative, which commissioned the memorial, documented some 4,400 racial terror lynchings in the United States from 1877 through 1950.

An untold number of other people also were lynched, but their stories were lost to time or official indifference.

Janet Langhart Cohen said those cases include that of her distant cousin Jimmy Gillenwaters, who was lynched in Kentucky in the early 1900s.

Cohen, the wife of former Republican Senator William Cohen of Maine, said Trump is one of too many racist whites who have shown a lack of respect for lynching victims and their descendants.

“He knows what he’s doing. He knows how to hurt and divide,” said Cohen, who wrote the play Anne and Emmett about an imaginary conversation between Till and Holocaust victim Anne Frank.

Facing an impeachment inquiry that he and supporters claim is illegal, Trump tweeted: “So some day, if a Democrat becomes president and the Republicans win the House, even by a tiny margin, they can impeach the president, without due process or fairness or any legal rights. All Republicans must remember what they are witnessing here – a lynching. But we will WIN!”

Edwards, who lives in Dayton, Ohio, said she feels sick in her stomach any time she hears the word “lynching”, and Trump’s tweet was no different.

Trump’s message was all the worse because it displayed indifference to the victims of actual lynchings and their descendants, Edwards said.

“It says to them that, ‘what happened to you is like nothing more than an investigation’. These are people who went through the most gruesome and heinous things that could be done to them,” said Edwards.