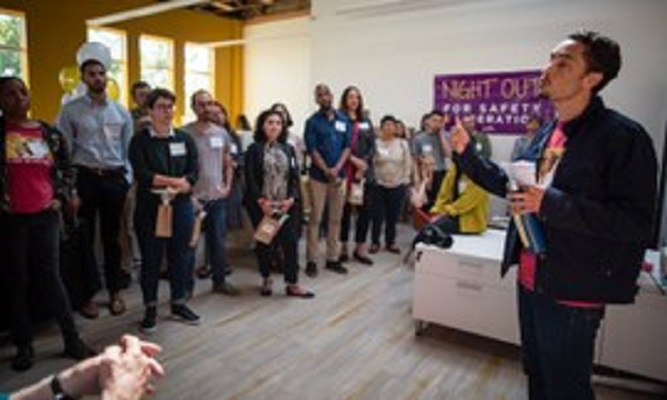 What to Build Instead of Prisons

It’s a midweek summer afternoon, and staff and supporters of the Ella Baker Center for Human Rights are standing in a room newly furnished with cubicles, desks, and chairs. They are enjoying snacks, chatting easily, and posing in a space designated as a photo booth for the day.

The open house is a precursor to the late-summer grand opening of Ella Baker’s permanent new home and a celebration of this new chapter for the restorative justice organization.

Created more than two decades ago as the Bay Area Police Watch to hold officers accountable, Ella Baker Center organizes with Black, Brown, and low-income people “to shift resources away from prisons and punishment, and towards opportunities that make our communities safe, healthy, and strong.”

Initially, it operated out of a closet in the offices of the Lawyer’s Committee for Civil Rights in San Francisco and, in 23 years of renting space, had moved more than nine times.

Now, its permanent new home on International Avenue, one of Oakland’s main thoroughfares, means that even as commercial and residential rents in the San Francisco Bay Area continue to rise, the organization cannot be displaced.

“Restore Oakland is really our attempt to try to make a stance against gentrification,” says Zachary Norris, executive director at the Ella Baker Center, adding that the organization will be partnering with others “to make sure that folks can stay in East Oakland, in particular Black and Brown communities.”

Ella Baker’s organizers are involved in such on-the-ground work as gathering signatures for petitions, corresponding with people in prison, and being present for community actions such as lobbying day at the California State Capitol.

In 2015, the organization got the Alameda County Board of Supervisors to set aside of portion of the county’s public safety realignment budget for reentry programs that would help people returning home from incarceration to rebuild their lives.

Three years ago, it partnered with Restaurant Opportunities Centers United, or ROC United, which advocates for fair wages and advancement for restaurant workers, to purchase the building that would become its permanent home. The structure, which was once home to the Latin-oriented retail music chain, Ritmo Latino, is in East Oakland, one of the last communities in the Bay area that remains relatively affordable.

It will share space with other local organizations. Also, ROC United will operate its restaurant, COLORS, in the building as well as its signature COLORS Hospitality Opportunities for Workers program, where people learn front-of-house fine dining skills and earn living wages.

“Having this space helps with the sustainability of this work,” says Vanessa Moses, executive director of Causa Justa, a grassroots organization focused on social, economic, and political issues that will share space in the building.

Restore Oakland was in the works long before Ella Baker and ROC United purchased the building.

Seven years ago, leaders from several groups involved in addressing the root causes of mass incarceration met in Oakland to discuss future potential projects that would be alternatives to more jails and prisons. They wanted to explore ways to design and build out space that could be dedicated to restorative justice and community building.

In attendance was Deanna Van Buren, co-founder and design director of Designing Justice + Designing Spaces, an architectural firm that uses its work to address issues such as “poverty, racism, lack of access to resources and the criminal justice system itself.” It identifies them all as the root causes of mass incarceration.

Those at the meeting, whose organizations also align in goal and mission with Van Buren’s, discussed the need to build alternatives to what is now considered the norm in the criminal justice infrastructure.

Two years later, the Ella Baker Center commissioned a study, called Who Pays?, asking  past offenders, their loved ones, and survivors of crime about the kind of vision they believe was necessary for community safety.

“People overwhelmingly said, ‘We need restorative justice, and we need economic opportunity,’” Norris says. “We heard that, and we really wanted to create a space that kind of embodied that in building for, and that’s what Restore Oakland is all about.”

The organizations reached out once more to Van Buren to discuss a “more enhanced and complex idea,” forming the beginnings of Restore Oakland.

Last year, they hired her company, Designing Justice, to lead renovation of the Restore Oakland complex.

Van Buren says she is happy to know that the space is going to be a long-term anchor in East Oakland.

“I think what I’m most excited about is that it’s actually owned by organizations that are deeply committed to their mission and to the community,” she says. “They’re not going to start raising rent and kicking people out.”

The firm and organizations involved in the design process were intentional about finding a space that would serve various purposes—office space for the organizations, the restaurant and a commercial kitchen, and rooms what would be available for community members to use for meetings and events.

Once Ella Baker and ROC United secured the building, one key feature they wanted to include was a room where organizations, such as Community Works West and Restorative Justice for Oakland Youth, could hold restorative justice circles for community members. It is one of the first dedicated restorative justice spaces in the country.

The Restore Oakland grand opening gave attendees a tour of the new space in the Fruitvale community.

These circles are spaces where those who have caused harm and the people who were harmed by them can resolve their issues and begin the healing process, while being surrounded by their community. At Restore Oakland, the room strictly reserved for restorative justice work has two entrances, so that the parties who have a dispute won’t have to see each other until they are intentionally in the space together.

In addition to the restorative justice work, the other organizations at Restore Oakland tackle issues such as poverty, racism, and access to resources head on, says Reetu Mody. A lawyer and organizer, she is interim executive director of Restore Oakland Inc., the nonprofit that will serve as a link among all of the organizations that share the space.

Now that they’re housed in the same building, she says, they’re answering the questions of how to continue to do their work together rather than in silos, so that they can “make the sum greater than the parts.”

The idea is that it will facilitate an environment where the different staffs “can talk to each other, build with each other, enjoy each other’s company and have  that organizing perspective.

“That’s really what brought me to Restore Oakland—this question that I’ve been thinking through my whole life,” Mody says. “And here was an opportunity to do it in a really different way.”