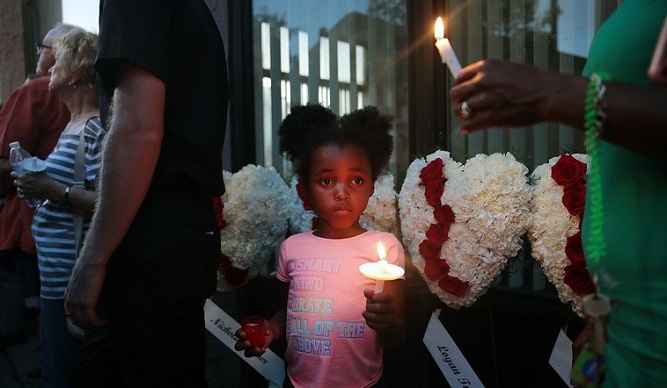 White Supremacy Has Always Been Terrorism

White terroristic activity has been around since the nation’s birth. But the failure to acknowledge the escalation as a result of President Trump’s continual hateful rhetoric is itself aiding and abetting its proliferation.

In moments like this, the script is sadly predictable. Some will blame everything from mental illness to video games for the carnage. Others will self-righteously claim that this is not the time to “play politics.” But speaking truth about this president is far from a political game. It is peddling in a sobering reality.

There are no “both sides” here. There is only right and wrong.

Never forget, this is a president who described himself multiple times as a “nationalist.” This is someone whose staff spent much of the hours after the El Paso shooting deleting the tweets in which he used language echoed in the El Paso murderer’s diatribe. This is also a person who recently actually made the white power sign in a speech while mentioning AOC, and someone who has a long history of making racist comments about Black people, Latinos, and Muslims, including in the face of murder, saying defiantly that Nazis & KKK members were “very fine people.”

The truth of the matter is Trump has,  not just as a political strategy, but because at his core, this is who he is.

These are the facts:

1) White supremacists account for nearly 3 out 4 murderous terrorist acts in this nation;

2) The number of white supremacist groups in America has jumped 30% in the last four years;

3) According to the most recent FBI data, the number of hate crimes in America has increased three years in a row, jumping about 17% in the one year alone

4) Counties that hosted a Trump rally during his run for president in 2016 have subsequently experienced a 226% jump in hate crimes.

5) One of the first things the Trump administration did after being elected was to essentially eliminate a program focused on reducing white supremacist violent activity and instead started the bullshit program that monitors the completely made-up threat of “Black Identity Extremists.”

It doesn’t take a rocket scientist to see the correlation between the political rise of Trump (his campaign run in the primaries, the general election and his time in office), his specific policy negligence around white terrorism, the white supremacist language he infuses in his rhetoric on a daily basis, and the rise in white nationalist violence that has ensued.

When we refuse to speak this truth, we fuel white terrorism. We not only allow it to exist, we also allow it to thrive.

That said, calling out the real and present danger of a president who is right before our eyes radicalizing an army of white terrorists is not a political act. Instead, it is an urgent responsibility. And to do anything less is to allow this evil to continue to thrive.

This article was originally published by Avis Jones-Deweever on Medium. It is reposted here with permission.