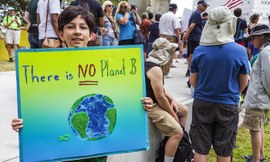 Why Students of Color Are Stepping Up to Lead Climate Strikes

Kawika Ke Koa Pegram has lived his entire life in island communities and is all too familiar with what sea level rise looks like firsthand. Pegram, a 17-year-old junior in high school, recently moved back to Hawaii—where he was born—from the Philippines. Two years later, Hurricane Walaka hit the state.

“It was one of the worst storms the island has seen in modern history,” he remembers. “It had floods that went up to your knees and legs.” Pegram says he had seen that degree of flooding before, but this storm was different: It actually sunk an entire Hawaiian island.

Pegram is one of more than 60 student leaders who have stepped up to lead climate strikes in cities and towns across the country on March 15 as part of a global school strike for climate action modeled after the example of Swedish climate activist Greta Thunberg. An estimated 50 percent of U.S. student leaders are students of color. This representative leadership is making the strike relatable and accessible to more students.

Pegram first began environmental organizing just a few weeks ago. After seeing on Twitter that the global climate strike movement was coming to the United States, he tracked down the U.S. Youth Climate Strike website and emailed its leaders. “They got back within an hour. And within a few hours, I was in it,” he says. Pegram is now heading the state of Hawaii in staging school strikes and storming the Capitol in Honolulu on Friday.

On the other end of Pegram’s email was 16-year-old Isra Hirsi of Minnesota. She’s coleading the global climate strike in the U.S. along with 12-year-old Haven Coleman of Colorado and 13-year-old Alexandria Villaseñor of New York. About a month ago, the three girls came together to plan a U.S. strike that would shut down schools across the country and demand elected officials pass laws that curb global warming and mitigate its worst impacts. After launching a website, they turned to Twitter, Instagram, and Facebook to find other students to organize climate strikes in the remaining 47 states.

Seventeen-year-old Feliquan Charlemagne knew Hirsi through activist circles and heard about the strike in a group chat they were both part of. Initially he didn’t want to organize the strike in his state of Florida. It sounded like more than he could handle given his workload as a student at West Port High School, in Ocala.

But a couple of days went by and he changed his mind. “It’s really important to me, being Black and Caribbean. My communities will be some of those most affected by this,” he explains. “And the people who are most affected should be the ones talking about the issue.”

The mounting threat of repeatedly devastating storms pushed the majority of Charlemagne’s family to move to Florida from British Virgin Island St. Lucia and U.S. Virgin Island St. Thomas. But that solution isn’t sustainable, he says. “Here in Florida, we’re going to be one of the worst hit and the first hit.”

Alongside Charlemagne, students have stepped up to lead climate strikes everywhere from Anchorage, Alaska, to Houston. The group represents Native, Black, island, immigrant, and refugee communities. For many of them, climate change isn’t the first environmental threat they’ve faced. Wisconsin state leader Ndemazea Fonkem, the 16-year-old daughter of Cameroonian immigrants, lives less than a mile away from the Fox River in northeast Wisconsin where, as she points out, paper companies dumped waste products in the 1970s. Cancer rates in her region are higher than the rest of the state. Fonkem was born with a congenital limb deficiency.

Charlemagne says the climate strike national leaders often discuss the importance of including people of color, but he says the leadership structure is first and foremost based on connections, experience, and willingness to step up and do the work. Of the state leaders she is tasked with managing, Hirsi says, “I guess a majority of our state leaders are students of color. Wisconsin, California, Connecticut, New York, Georgia,” she says. National co-leader Coleman, who is White, adds, “We didn’t want it to be just a ton of White people leading it, because communities of color—they’ve been doing work to fight climate change just as much as we have.”

Many environmental organizations are still run by largely middle- to upper-class White people.

Across the country, the students leading the climate strike have connections with activist groups like Zero Hour, Extinction Rebellion, and March For Our Lives. But the organizing model the team uses is deliberately independent of any single organization and horizontal. It builds on the momentum of the increasingly Black and Brown leadership behind the Green New Deal, driven by organizations like Justice Democrats and the youth-led Sunrise Movement.

“Our generation grew up watching the segregation of the environmental movement and its inability to bridge across generations, race, class, etc.,” says Varshini Prakash, the co-founder and executive director of Sunrise.

“There was a lack of diversity at the upper levels of leadership,” adds Nakisa Glover of North Carolina, referring to when she started working in environmental organizing.

Thirty-six-year-old Glover, who is Black, is now the head of climate justice organization Sol Nation. But when she was a young person, climate change wasn’t a dinner table conversation, she says. “We’re having a heat streak, or code-orange and code-red air quality days—these were things you understood, that you knew had negative impacts, but nobody was framing it in the language of its relationship to climate change.”

Glover has noticed that as a growing lexicon has merged social issues with environmental issues in the field of climate justice, movement leadership has become more representative of the U.S. communities most impacted by climate change. That’s certainly the case with the youth climate strike. But it’s also true that many environmental organizations are still run by largely middle- to upper-class White people.

“It’s different when you’ve got to think about [diversity] and then put the pieces together,” says Mustafa Santiago Ali when referring to these groups, whose lack of diversity is their “Achilles’,” he adds.

Ali is Glover’s former colleague at the Hip Hop Caucus and now the vice president of environmental justice, climate, and community revitalization at the National Wildlife Federation. He has been organizing for decades. What is most impressive about these youth climate organizers, Ali says, is the way that they see the world. “Everybody is sort of equal and brings something of value to the process,” Ali says. “To see the network that they have built, to see the way they share information, to see the way they support each other through strategy … that, for me, is what a 21st-century paradigm looks like.”

Strike leaders are trying to lower the barriers to participation in their states.

Many of the state leaders have focused on social issues in their past work, such as LGBTQ rights, gender equality, and gun violence prevention. According to Glover, they approach climate justice with a shared language that links tornados, asthma, or water pollution to these social issues.

“There is a point where we need to think: Why are these lands being deforested, why are they being overly mined? And it’s because of colonization,” says 18-year-old Kira Ortoleva of Connecticut, whose heritage is Cherokee and Mexican.

“If we want this movement to be successful, we need to be intersectional and we need to address how people of color have been harmed the most,” Charlemagne adds.

Wisconsin state leader, Fonkem, sums it up: “I am an environmentalist because being one is a part of fighting for every other cause.”

But striking is not something all students can easily participate in. Some student leaders cite strict attendance policies that impact course completion and graduation. Others may worry about being penalized for being outspoken or missing too much class. California strike co-organizer Jessie Parks says students at his school had trouble with a teacher who refused to accept an important assignment from those who participated in the nationwide walkout for gun violence awareness last April.

Plus, truancy laws disproportionately impact students of color, Parks points out. “We don’t have the privilege that our White counterparts have because we [could] be, I guess you could say, punished more.”

Strike leaders are trying to lower the barriers to participation in their states. “For Hawai’i, I purposefully scheduled the protest to be after school,” Pegram says. In Wisconsin, Fonkem is organizing a bussing plan to bring students from around the state to Madison, which national fundraising efforts will help pay for. Other initiatives, like sign-making events, ensure that students do not have to spend much money out of pocket. And those unable to strike that day are encouraged to wear green in solidarity.

At her high school in Connecticut, Ortoleva is recruiting the small environmental club she started last August to join her on strike day. Right now, the club is working on a pollinator garden. But on March 15, many of the club’s students will join other students across the state at the legislative office building in Hartford, while students in upward of 70 cities around the country do the same.

Ortoleva says being part of a group mobilizing students across thousands of miles is both inspiring and powerful. “When it comes down to it, I feel like there is leadership flowing through my veins,” she says.

“Our generation is the most diverse in American history, and our identities combined with our access to information has made us more cognizant than ever about the world around us,” Fonkem continues. “All of us organizing are here because we care, regardless of race. But having a diverse face at the forefront is a demonstration of the new generation.”