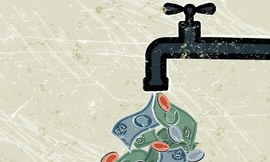 Yes, I feel the current distribution of wealth is grotesquely unfair. Yes, I believe that those who cannot or will not work should not be allowed to starve. Yes, I would be against plans to eliminate or cut the existing welfare system as long as it is needed. Yes, I believe that we should build a community in which everyone’s needs are met.

Yet I oppose a universal guaranteed basic income.

My objections have surprised many people, but they are consistent with what I think is the solution to our economic justice problem. I favor deep democracy replacing the rule of capital in our lives. This would require reparations and the reconstruction of the commons to include the Earth and the financial resources that have been created by our labor within exploiting systems.

Guaranteed basic income is simply more widely available welfare. It would only help people have more access to consumption without altering anything about how production is organized. It would not alter wealth distribution and ownership. And it would require a new bureaucracy staffed by agents and experts to regulate and allocate this universal distribution of money.

Our economy suffers from the fact that communities are not having their needs met and a quality of life equitably elevated by all. Neither the self-regulated market nor the intervention of government has been successful in doing this to the satisfaction of the many. We are told not to bother to understand how we got into the situation we are in, but rather forget the past and look ahead to the future.

I’m reminded of a story that I was told by the Rev. Bongani Finca who was involved in South Africa’s Truth and Reconciliation work. A Black South African, Tabo, confronted a White man, Mr. Smith, who had disrespected him and stolen his prize cow. With the prospect of amnesty for telling the truth, the White man admitted to having done what he was accused of, recognized how horribly wrong it was, and asked for forgiveness, saying that he was truly sorry. Tabo was visibly relieved for having an opportunity to confront his oppressor and get an apology. They shook hands and embraced. As Mr. Smith, stood to leave, free, with his amnesty, the Black man called out to stop him. The White man turned back with a questioning look on his face, not sure why he was being stopped. Tabo, the Black South African, asked him, “But what about the cow?” Mr. Smith was visibly angry: “You are ruining our reconciliation,” he shouted, “This has nothing to do with a cow.”

That is the question we must ask all those who say the past is long gone but still retain ownership of the herd produced by that old cow. We won’t forgive and forget until we get the cow back. But just suppose that the Mr. Smiths in the world make a counteroffer: “I’ll tell you what, why don’t I just give you a supply of butter?” “The hell,” Tabo might reply. “If you give me back my cow, I can give you butter!”

Guaranteed income is merely a supply of butter.

It makes two assumptions, both of which I think are false: It assumes that the government can simply pay out the money without having other negative consequences for the economy as a whole, and it also assumes that there is a rational amount of money and process for its allocation that experts can figure out and apply fairly.

What is true is that labor is the sole creator of value. Therefore, the money has no place to come from but out of the social surplus, either as taxes or reduced wages. In other words, there is a political and economic price to be paid that cannot be avoided.

What I do think we need is reparations, the democratization of wealth, the re-creation of the commons, and the outlawing of financial systems of theft and speculation. Communities must become their own developers through broadly democratic planning and democratic access to nonextractive financing.

A good friend of mine, Dara Cooper, an organizer with the National Black Food and Justice Alliance, sent me an email that ended with this quote from revolutionary and Burkina Faso’s former president, Thomas Sankara:

“We must produce more because the one who feeds you usually imposes his will upon you.”

The key is democracy and expanded opportunities to be productive rather than enhanced consumption. We need the cow back, not just a supply of butter.