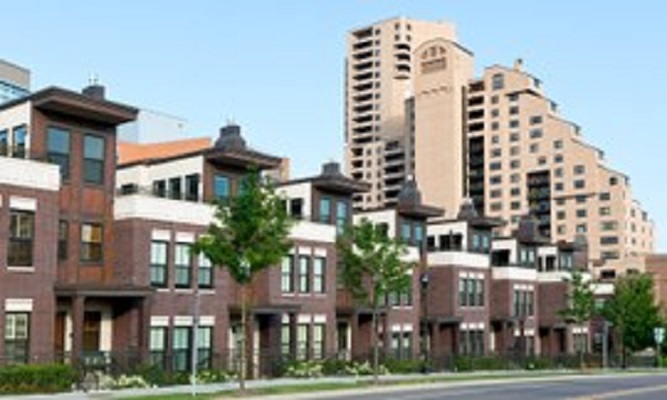 Nothing captures the housing affordability crisis as well as this fact: In no single city, state, or other municipality in the U.S. can someone earning minimum wage afford a two-bedroom apartment.

This is compounded by the fact that housing prices continue to rise, and cities don’t have the ability (and in some cases, the physical space) to add more affordable housing to help keep costs down.

So Minneapolis changed the rules, and others are taking notice. In December 2018, the city approved a plan that allows for duplexes and triplexes, effectively eliminating the future of building more single-family housing.

Now Oregon is following in the footsteps of Minneapolis, with a bill that the Legislature passed in June and which Gov. Kate Brown is expected to sign in the coming weeks. The bill would allow for “middle housing”—duplexes, triplexes, and fourplexes—on parcels now designated for single-family housing in cities with populations of at least 25,000. Smaller cities with populations starting at 10,000 people also are required to allow duplexes.

The law would affect 2.8 million Oregonians, according to the Sightline Institute, a nonprofit think tank that conducts research on many social issues in the Pacific Northwest, including housing.

Many cities and states across the U.S. are struggling to meet the needs of their poorest residents. The National Low Income Housing Coalition’s “Out of Reach” report, which documents unaffordable housing across the U.S., hammers home the fact that the average rent on a two-bedroom apartment far outstrips the income of full-time minimum wage workers in every state.

In many cities across the country, most residential land is zoned for detached single-family homes only, the New York Times recently reported. But zoning for higher-density housing is not a solution to the ongoing lack of housing availability and affordability.

“I don’t think that it’s a solution to immediately fix everything,” said Michael Andersen, a senior researcher at Sightline. “It’s not an adequate solution for everything that ails us in the housing market. It shouldn’t be represented as such.”

Andersen said he believes allowing this type of multi-unit housing is part of a long-term investment that will slowly change the housing landscape in Oregon, and in which effects will be seen decades after implementation.

“The great advantage of middle housing is that … it’s a politically viable way to add relatively lower cost homes,” he said. He noted that this type of housing would not be “deeply” affordable, but that it allows neighborhoods to gradually become more densely populated so they can support mass transportation, retail, and jobs that are walkable from residences, and community cohabitation that’s good for extended families and seniors aging in place.

More density has to be paired with other solutions in order to address a lack of affordability and availability.

But more density has to be paired with other solutions, he said, to address a lack of affordability and availability, which has contributed to widespread homelessness.

“It should be coupled with just adequate and abundant funding for the — I don’t know — 10% to 20% of the population that is just making less money than it takes to maintain and pay taxes on a property,” Andersen said. “The only way to solve that problem is by giving people money, and we should because it’s a human right.”

Minneapolis has been applauded by some policy experts and politicians for “banning” single-family housing and potentially increasing density, and some residents are taking steps to ensure they will be able to stay and thrive in their city.

Me’Lea Connelly, who is the vision and strategy lead at Village Financial, a community development financial institution that is geared toward “economic renaissance in Black communities,” said the region is now in a shift when it comes to housing.

“I would say it’s similar to the way that Seattle and Portland and some other fringe cities that have developed over the years where it just creeps up on you,” Connelly said, referring to smaller cities that often don’t receive national media attention.

Minneapolis has been quietly changing for years, she said. “All of a sudden, you look up, and there’s just no occupancy.”

Connelly said that now is the time that the Minneapolis area “either needs to transition into higher density, or it’s going to become a very economically segregated town, like, you’re going to end up pushing everybody [who] can’t afford a certain rate out of that space.”

To be sure, the Twin Cities is already racially and economically segregated, in part because of the historical ban to build anything that was not single-family housing in many parts of the region. The decision to upzone parcels that have traditionally been reserved for single-family housing could offer a remedy for segregation.

Minneapolis has been quietly changing for years.

But shortly after the approval of the Minneapolis 2040 plan, which includes the ban on single-family housing, Myron Orfield, director of the Institute on Metropolitan Opportunity at the University of Minnesota Law School, said he doubted the plan would fix segregation in any substantial way.

Connelly said that similar plans with good intentions and strategies in the past have not always benefited the people who needed them most. She pointed to affirmative action as an example.

In 2006, Columbia University law professor Kimberlé Crenshaw, who coined the term “intersectionality,” wrote in the University of Michigan Law Review, “The primary beneficiaries of affirmative action have been Euro-American women.”

“So that’s the part where I’m like, well, let’s see what the actual outcome is going to be and hoping that it improves the covenant for Black people of color,” Connelly said.

Minneapolis’ residents of color and those who have lower incomes have been thinking about better ways to ensure they have housing in the long term. Connelly pointed to Tameca Woods, who together with other tenants and local tenant rights organization United Renters for Justice, persuaded the city of Minneapolis to revoke the rental license of their slumlord landowner and other property owners across the city.

Since that time, United Renters for Justice has been raising money to purchase buildings from negligent landowners and develop tenant-owned housing cooperatives, so that they can stay in their homes.

Connelly is not involved with the tenant rights organization, but she said Village Financial has also been planning how to use its resources for cooperative housing and lending. It has already bought one lot of property that community members will have a hand in building out.

Connelly said they’ve been answering the question, “How do we want to imagine what density and homeownership and cooperatives, and what does that look like, for us?”