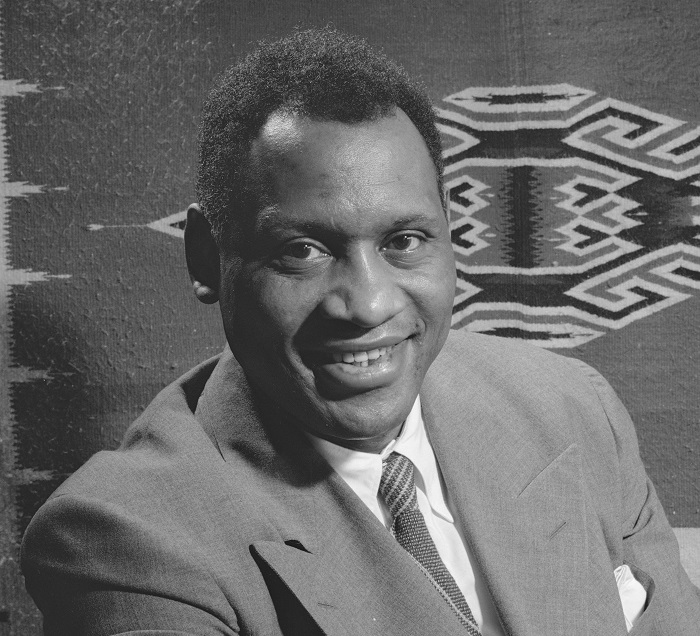 Chinese broadcasters have aired shows featuring Paul Robeson (1898-1976), one of the most popular African American singers and actors of his era and a well-known civil rights activist, several times in recent years.

China National Radio and various channels of the widely influential China Central TV showcased Robeson on programs in 2021, 2012 and 2009 narrating China’s resistence to foreign military aggressions. This could seem like unusually frequent coverage related to an American who passed away decades ago.

My book, Arise, Africa! Roar, China! Black and Chinese Citizens of the World in the Twentieth Century, unpacks the little-known yet important relationship between Paul Robeson and China, which continues to resonate powerfully today.

Robeson is long remembered in China partly due to his contribution to popularizing the country’s future national anthem after the singer’s 1941 recording of an album of Chinese fighting and folk songs with Liu Liangmo (ca. 1909-88), a prolific journalist, musician and Christian activist.

In November 1940, in New York City, Robeson received a phone call asking him to meet Liu, recently arrived from China. Liu’s accounts of his acquaintance with Robeson would be published in various Chinese-langauge periodicals.

Robeson met Liu within half an hour. When Robeson inquired about the mass singing movement that Liu had initiated in China, Liu related the backstory behind the new genre of Chinese fighting and folk songs he helped invent for war mobilization, singing some examples.

Liu noted Robeson’s favourite was the signature piece, “Chee Lai!” or “March of the Volunteers,” because, as Robeson explained, its lyric “arise, ye who refuse to be bond slaves!” expressed the determination of the world’s oppressed, including Chinese and Black people, to struggle for liberation.

In November 1941, Robeson, Liu and the Chinese People’s Chorus — which Liu had organized among members of the Chinese Hand Laundry Alliance in New York City’s Chinatown — recorded Chee Lai! Songs of New China for Keynote Records.

Liu’s liner notes for the album relay that he saw the collaboration as “a strong token of solidarity between the Chinese and the Negro People.” Robeson’s notes said:

“Chee Lai! (Arise!) is on the lips of millions of Chinese today, a sort of unofficial anthem, I am told, typifying the unconquerable spirit of this people. It is a pleasure and a privilege to sing both this song of modern composition and the old folk songs to which a nation in struggle has put new words.”

In December 1941, the New York Times lauded the album as one of the year’s best and noted that profits went to the China Relief Fund, chartered in the state of New York that same year by founding aid organizations.

Robeson reprised this song in his numerous concerts in North America and Europe, sometimes amid entangled racial and ideological controversies.

The U.S. Army Air Force Orchestra played the tune at the start and end of a film produced by the U.S. state department, Why We Fight: The Battle of China (1944), directed by the Oscar-winning Frank Capra.

‘March of the Volunteers’

Robeson’s long-term alliances with sojourning leftist Chinese artists such as Liu, writer and philosopher Lin Yutang and “The King of Beijing Opera,” Mei Lanfang — along with American supporters like Agnes Smedley, the American journalist based in Shanghai in the 1930s — led to his mutual embrace with the Chinese Communist Party and the People’s Republic of China (PRC).

Chinese news sources reported that to celebrate the announcement of the PRC’s establishment on Oct. 1, 1949, Robeson sang “Chee Lai!” on the streets of Harlem.

Robeson famously telegrammed Mao Zedong to congratulate the new regime: “We celebrate the birth of the People’s Republic of China, because it is a great force in the struggles for world peace and human freedom.” The contents of the telegram were immediately published in The People’s Daily, the mouthpiece of the Chinese Communist Party.

Liu wrote an article, “People’s Singer Robeson,” that was widely circulated across China and Chinatowns in the United States between 1949 and 1950. After promoting the causes of China to the American public, particularly African Americans, for nearly a decade, Liu had just returned to China to serve as a high-level cultural official.

Liu’s article helped alter the narrative about Robeson within China from that of an “exotic entertainer” to a heroic role model for socialist citizens there. In the years leading up to the founding of the PRC, the representation of Black people in the media was dominated by coverage of Jazz musicians in nightclubs of treaty ports, who were dismissed as “foreign musical instrumental devils” — a view which
echoed with long-held stereotypes of the “primitive” African.

Liu’s article focused on Robeson as an internationalist who “embodied the perfect marriage between art and politics.” It was subsequently followed by a body of printed materials about Robeson — such as stories in state-owned newspapers, biographies, collections of his songs and even a cartoon series for children —
that stressed his heroism and model status.

Film, meanwhile, also contributed to Robeson’s popularity as a hero in China. While the newly created communist nation generally rejected Hollywood and European films, a 1939 British film The Proud Valley, starring Robeson, was brought to Chinese audiences around 1956 and was well received. The film showcased the popular singing and performance of a muscular Robeson playing an American miner in Wales struggling with local miners in a labour dispute.

African American writer, sociologist and civil rights activist W.E.B. Du Bois, who was later welcomed in China in 1959, wrote in the publication Crisis in 1930 about how “some white folk are frightened of the naked manhood of Paul Robeson.” For Chinese audiences, Robeson provided an inspiring model of masculinity.

Robeson’s version of “Chee Lai!” was played in the Grand Hall of the People’s Congress in Beijing during Nie Er Music Week in 2009. Nie Er was the talented musician who composed “Chee Lai!”.

Robeson continues to be remembered as a loyal friend to China. He is celebrated for globalizing China’s national anthem, for his songs that set hearts stirring, for his contributions to the Chinese nation’s liberation — and to the friendship between peoples of China and the United States, particularly African Americans.