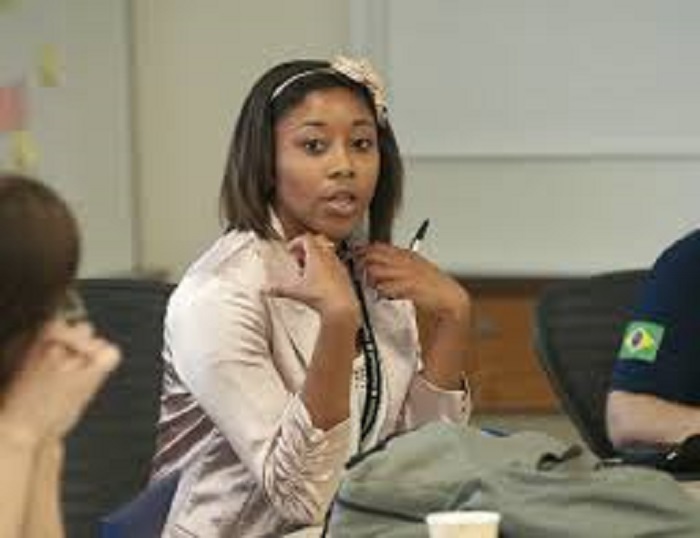 Black Girls Are 4.19 Times More Likely To Get Suspended Than White Girls – And Hiring More Teachers Of Color Is Only Part Of The Solution

Andrea Joseph-McCatty is an assistant professor at the College of Social Work at the University of Tennessee. Her research examines disproportional school suspensions and, in particular, the ways in which inequity impacts the experiences of students of color. Below are highlights from an interview with The Conversation. Answers have been edited for brevity and clarity.

You recently gave a talk about the disproportionate suspension of Black girls in the U.S. Why is equity so hard in our schools?

Most recently my work has focused on understanding and addressing racially disproportional school suspensions and the ways in which those are also gender disproportionate. For example, we know nationally that in the 2017-2018 academic year, over 2.5 million children received one or more out-of-school suspensions. While these numbers are going down compared to years prior, students of color and students with disabilities are receiving a greater share of suspensions and expulsions.

It’s also important to disaggregate the data to understand trends at the intersection of race, gender, class and other student characteristics. For example, in 2017-2018, Black girls had 4.19 times the risk of receiving an out-of-school suspension compared to white girls. Nationally, they are the only group of girls disproportionately suspended in relation to their enrollment.

To address high and disproportional suspensions, schools have implemented multitiered interventions, such as restorative justice practices, and positive behavior interventions, which create positive, predictable, equitable and safe learning environments. While some studies show a reduction in high and disproportional suspensions from these efforts, discipline disparities often persist.

However, some schools are seeking to change these disproportional rates for Black girls and other girls of color by partnering with community organizations such as Gwen’s Girls Incorporated, The F.I.N.D. Design and Code Switch, among others, to provide gender and culturally responsive interventions.

Yet, a major barrier to intervention is the perception adults hold about Black girls. Instead of receiving developmentally appropriate and socioemotional support, many Black girls are adultified – a concept coined to describe how Black girls are disproportionately perceived as less innocent, needing less nurturing, less protection, less support, knowing more about sex and adult topics, and are more adultlike than their peers.

While some may generally assume that students only receive school discipline for breaking school rules, social scientists have used data to show how race, gender, disability and class bias at the intersection of punitive discipline policies and systematic inequities lead to disproportional suspensions.

For example, we know that Black girls in particular are getting disciplined in school for wearing their natural hair in afros or having braids, both of which are styles that allow Black girls to embrace their beauty and have cultural pride in the face of Eurocentric beauty ideals that suggest that straight hair is more professional and neat.

In other cases, Black girls are more likely to receive school discipline outcomes for subjective infractions such as tone of voice, clothing and disrespect compared to other girls. And that’s part of the way racial and gender discrimination intersect to create disproportional suspensions for Black girls. In my research, I build on these ideas and also explore how adverse childhood experiences, including neglect, abuse, neighborhood violence and parent incarceration and/or death, become another layer by which Black girls are misunderstood.

In my research and community partnerships, we explore how race, gender and adultification bias are shaping the way adults perceive the behaviors of Black girls and how this might impact how their trauma-response behaviors are perceived. Will it be met with punishment or support? Increasingly, schools are adopting trauma-informed practices and policies to decrease the punishment of childhood adversities in school.

But I wonder if they account for the way that race, gender and class bias and inequities both inform adverse childhood experiences and inform adult perceptions about children’s behaviors. While school-based trauma-informed practices are a step in the right direction, the next question I also ask is, how are school districts defining what an adverse childhood experience (ACE) is? Are they using the early measure normed on a predominantly white middle-class population, or are they using the [expanded measure] that surveyed a diverse population and identified additional ACEs such as racial discrimination, foster care involvement, neighborhood violence and bullying?

Without using the expanded definition, it is possible that schools are continuing to overlook students’ needs and instead punish their trauma. My colleagues and I suggest that practitioners need trauma-informed professional development at the intersection of race and gender at minimum to begin to provide robust support for students of color experiencing adversity.

Does the race of the teacher play a role in all this?

I would say yes, but I don’t think it’s a simple answer. I think there is a movement that says, hey, we still need more teachers of color to foster a more equitable environment. While there is research to suggest that Black teachers are less likely to suspended Black students, this is not always a consistent finding for boys and girls, and across school demographics, because having a diverse workforce does not totally eliminate bias.

Therefore, having more teachers of color is not the sole solution to addressing disproportional suspensions. It can help in terms of seeing students’ behaviors in context, particularly when an educator of color comes from a similar cultural context, gender context and class as that young person. However, despite these benefits and their training, it is an uphill battle for any educator to teach in a school system that has not addressed past and present funding, practice and policy inequities.

So when we think about change, it’s really systemic change that we need. We need whole school change to begin to address some of these inequities. Meanwhile, as I continue to co-advocate with my community partners for Black girls, we’ll continue to ask, “Is your intervention intersectional”? – meaning does it take into account the the interconnected nature of social categorizations and discrimination.