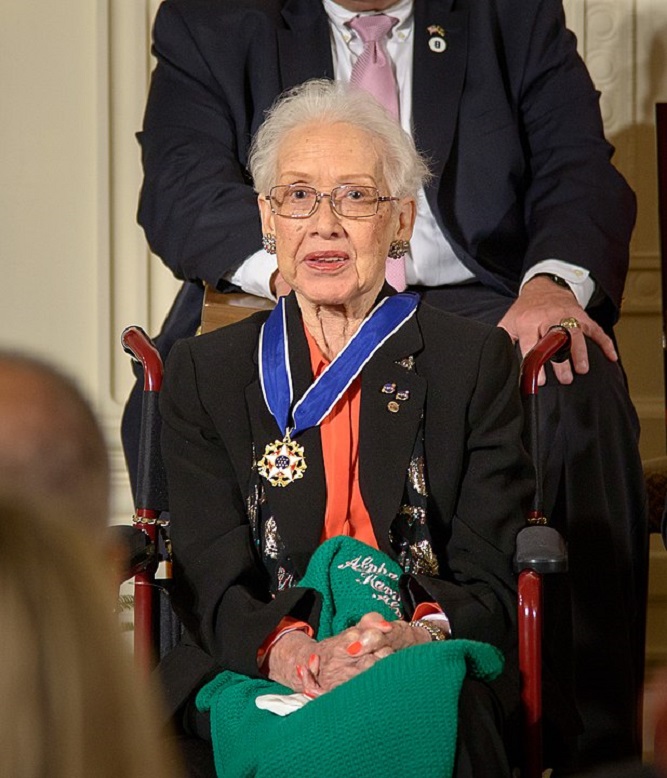 Katherine Johnson, an African-American mathematician who made critical contributions to the space program at NASA, died Feb. 24 at the age of 101.

Johnson became a household name thanks to the celebrated book “Hidden Figures: The American Dream and the Untold Story of the Black Women Mathematicians who Helped Win the Space Race,” which later became a movie. Her legacy provides lessons for supporting women and other underrepresented groups in mathematics and science.

As a historian of mathematics, I have studied women in that field and use the book “Hidden Figures” in my classroom. I can point to some contemporary ideas we can all benefit from when examining Johnson’s life.

Early in her life, Johnson’s parents fostered her intellectual prowess.

Because there was no high school for African-American children in their hometown of White Sulphur Springs, West Virginia, the family relocated to Institute, West Virginia, during the school year. Johnson entered West Virginia State College High School as a preteen and enrolled at the age of 14.

While at West Virginia State, Johnson took classes with Angie Turner King. King taught at the laboratory high school while she worked to become one of the first African-American women to earn masters degrees in math and chemistry. She would go on to earn a Ph.D. in math education in 1955.

King taught Johnson geometry and encouraged her mathematical pursuits. Thirteen years older than Johnson, she modeled a life of possibility.

Johnson graduated from West Virginia State College at the age of 18. While there, she had the good fortune to learn from W. W. Schieffelin Claytor, the third African American to earn a Ph.D. in mathematics in America. Claytor encouraged Katherine to become a research mathematician. In the 1930s, a little over 100 American women counted themselves as professional mathematicians.

Once Johnson completed the standard mathematics curriculum at West Virginia State College, Claytor created advanced classes just for her, including a course on analytic geometry.

Mathematics concepts build on one another and the mathematics she learned in this class helped her in her work at NASA many years later. She used these analytical skills to verify the computer calculations for John Glenn’s orbit around the earth and to help determine the trajectory for the 1969 Apollo 11 flight to the moon, among others.

Long before psychologist Angela Duckworth called attention to the power of passion and perseverance in the form of grit, Katherine Johnson modeled this stalwart characteristic.

In 1940, she agreed to serve as one of three carefully selected students to desegregate West Virginia University’s graduate program. She also had to be “assertive and aggressive” about receiving credit for her contributions to research at NASA.

In 1960, her efforts helped her become the first African-American and the first woman to have her name on a NASA research report. Currently, the NASA archives contain more than 25 scientific reports on space flight history authored or co-authored by Johnson, the largest number by any African-American or woman.

4. The power of advocating for yourself

When NASA was formed in 1958, women were still not allowed to attend the Test Flight briefings.

Initially, Johnson would ask questions about the briefings and “listen and listen.” Eventually, she asked if she could attend. Apparently, the men grew tired of her questions and finally allowed her to attend the briefings.

In 1940, Johnson found herself among the 2% of all African-American women who had earned a college degree. At that time, she was among the nearly 60% of those women who had become teachers.

Later, she joined the West Computing Group at Langley Research Center where women “found jobs and each other.” They checked each other’s work and made sure nothing left the office with an error. They worked together to advance each other individually and collectively as they performed calculations for space missions and aviation research.

6. The power of women advocating for women

Although Johnson started as a human computer in the West Computing Group, after two weeks she moved to the Maneuver Load Branch of the Flight Research Division under the direction of Henry Pearson.

When it was time to make this position permanent after her six month probationary period,
Dorothy Vaughan, then the West Computing department head and Johnson’s former boss, told Pearson to “either give her a raise or send her back to me.” Pearson subsequently offered Johnson the position and the raise.

7. The legacy of possibility

In March of 2014, Donna Gigliotti, producer of Shakespeare in Love and The Reader, received a 55-page nonfiction proposal about African-American women mathematicians at NASA in Hampton, Virginia.

“I kind of couldn’t get over the fact that this was a true story and I didn’t know anything about it,” Gigliotti confessed. “I thought well, this is a movie.” Gigliotti’s hunch ultimately led to the movie “Hidden Figures” and an entire generation of young people learning about the possibilities of math and science.

The U.S. State Department showed Hidden Figures throughout the developing world to encourage girls and women to consider the possibilities of careers in math and science. Mattel created a Katherine Johnson Barbie in its “Inspiring Women” series to celebrate “the achievements of a pioneer who broke through the barriers of race and gender.”